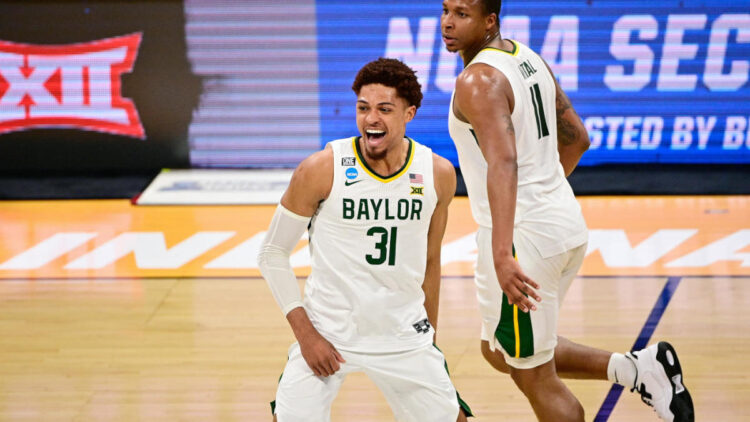 Mar 21, 2021; Indianapolis, Indiana, USA; Baylor Bears guard MaCio Teague (31) reacts after a play against the Wisconsin Badgers during the first half in the second round of the 2021 NCAA Tournament at Hinkle Fieldhouse. Mandatory Credit: Marc Lebryk-USA TODAY Sports

It’s an all-Texas first half of the NCAA Tournament’s Final Four on Saturday from Indianapolis as second-seeded Houston takes on No. 1 seed Baylor in a matchup of former Southwest Conference rivals with the Bears favored on the NCAAB odds to reach the national title game.

As sports-betting continues to be more and more of a mainstream aspect of sports in the United States, we here at UFFda! Sports try to use our (albeit limited) resources and connections to shed light on something that is emerging from office pools and man caves and into the zeitgeist.

Some of those resources include great analysis from industry insiders, with the following being a great example of that as we’ve pooled everything we could to breakdown this epic March Madness Match… Mup.

Being state rivals and former Southwest Conference rivals, the schools have met plenty over the years but not since 2003. Houston leads the series 38-15 dating to the 1949-50 season.

The state of Texas had more schools in this Big Dance, seven, than any other state. Texas Tech, North Texas, Texas Southern and Abilene Christian also won games in the Big Dance, leaving the University of Texas as the only school from the state that failed to win a game.

Houston (28-3), from the American Athletic Conference, beat No. 12 seed Oregon State 67-61 on Monday to send the Cougars to the Final Four for the first time since 1984.

The Cougars led at halftime by 17 points and with 10 minutes to play by a dozen points, but the Beavers dammed up defensively to stage a 17-5 run to tie the game up with just under four minutes to play. However, Quentin Grimes hit a 3-pointer with 3:21 left to break a 55-all tie. Houston knocked down enough free throws late while holding Oregon State without a basket during a critical 3 1/2 minutes. The Beavers made just 11-of-20 free throws, including a horrific 1-of-6 performance in the first half.

The Cougars are the best defense remaining in March Madness, leading the nation in field goal percentage defense and limiting opponents to 57 points per game. They’ve contained opponents in this NCAA Tournament to an average of 55.7 points per game.

UH shot just 32 percent overall but was able to withstand the shooting struggles by dominating the boards and finishing with a 41-29 edge on the glass, including 19 offensive boards that led to 19 second-chance points. They took 15 more shots total.

The Cougars have become the first team to reach the Final Four without facing even one single-digit seed. Houston’s 15-10-11-12 road to the Final Four tied 2001 Michigan State for the path of least resistance. The Spartans dispatched Alabama State (16), Fresno State (9), Gonzaga (12) and Temple (11) en route to Minneapolis.

Baylor (26-2) beat No. 3 Arkansas 81-72 to reach the Final Four for the first time since 1950. Since Scott Drew took over in Waco, Texas, in 2003, he had led the Bears to the Elite Eight on three occasions, the last in 2012. But in both previous appearances, Baylor ran into the eventual national champions and were sent home one step short of the Final Four.

The Bears jumped out to an 18-point lead nine minutes into the game and looked invincible for stretches vs. the Hogs. But Arkansas, having overcome double-digit deficits in every NCAA Tournament game before tonight, managed to cut the lead to four points in the second half.

MaCio Teague hit back-to-back 3-pointers in a late 10-1 run and finished with a game-high 22 points, helping the Bears hold off yet another comeback from an Arkansas team that had faced double-digit deficits in each of its first three tournament games.

Baylor’s stellar four-guard rotation all scored in double figures, with Jared Butler adding 14 points and five assists; Davion Mitchell getting 12 points and six assists despite playing limited minutes because of foul trouble; and Adam Flagler icing it with four-straight free throws to finish with 10 points.

Mitchell also guarded Arkansas star Moses Moody, one of the best freshman scorers in the country, and held him to 2-for-10 shooting. Baylor got 21 points off Arkansas’ 15 turnovers and finished with a 25-16 edge in bench points. JD Notae had a strong first half for Arkansas, picking up 12 points and helping the Razorbacks climb out of a big hole early. But he picked up three fouls in less than four minutes in the second half and fouled out of the game with more than 13 minutes left. That was a huge turning point.

The Bears have college basketball’s most potent backcourt behind Butler, Teague and Mitchell – averaging a combined 46.4 points per game.

Houston is used to slowing teams down with a tempo-controlling defense, but the Bears are used to that from great competition in Big 12 play. Baylor’s faced 12 top-30 NET-ranked teams since January, compared to Houston’s two.