Should the Vikings Offense Run Through Justin Jefferson? 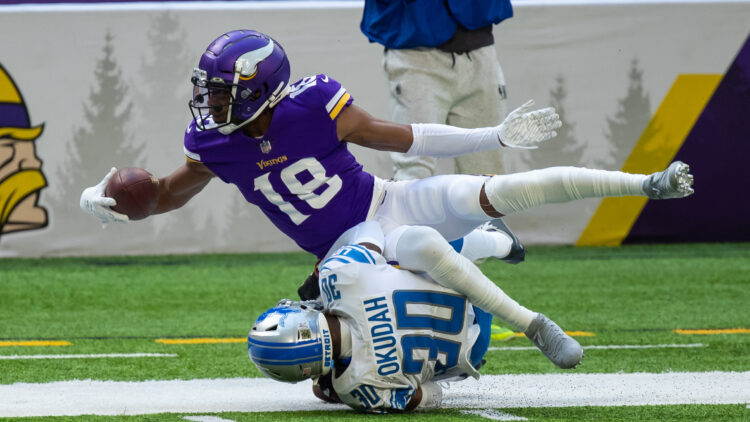 When you have a star wide receiver like Justin Jefferson, it is only natural to want to see the ball in his hands as much as possible. This week there have not only been calls from the Vikings faithful for their team to pass the ball more, but instead to pass it more to Justin Jefferson in particular.

Whenever the national media (or anybody, for that matter) talks about the Minnesota Vikings, it’s almost guaranteed that they will say “the offense runs through Dalvin Cook” during every game. That line will come from the commentary booth at least once. But should that be the case? Alexander Mattison has stepped in admirably on two occasions this season, but does it even have to run through the running back?

Mike Zimmer and Running the Ball

Mike Zimmers perceived obsession with running the football has long been a bone of contention among Vikings fans. There is a view by some that we run the ball too much (or all the time) and need to pass more. Through the first five games of the season, the Vikings offense has thrown the ball on 60% of plays. This is up considerably on last season’s average of 54.25%, leaving 40% for running plays. That is the 13th-highest percentage of passing plays in the league. So why does it feel like we run the ball so much?

The timing of the run plays is the best answer I can give. It feels like we always run on first down. We don’t. So far this season, we’ve run the ball on first down only 29.63% of the time, which is only the 17th-most in the league. Running on 2nd and long is a frustration to many, which is understandable. That is an area the Vikings could be more aggressive.

Then there are the plays like the ones that led to the fumbles by Dalvin Cook against the Bengals and Alexander Mattison against the Lions — situational moments when running the ball is the conservative option, and fans want to see the team be aggressive and “go for it.” Zimmers perceived brand of football has become tiresome for some, and when you see the exciting brand of football shown by the likes of Patrick Mahomes and Kyler Murray, it’s easy to see why.

So far this season, Jefferson has 33 catches from 45 targets for 462 yards and three touchdowns, averaging 14 yards a catch and 92.4 yards a game in man coverage. He has 17 catches from 20 targets for 256 yards and two touchdowns. No other receiver has 200 yards versus man coverage at this point. Those are impressive stats. There are currently five receivers that have more yards than Jefferson. These are the average targets per game for those five and Jefferson himself.

The Vikings wideout is seeing fewer targets than the others, although not by many. The argument for upping his targets by one or two does hold some weight. Out of the top 20 players with the most yards this season, Jefferson has the highest catch percentage at 73.3%. Pro Football Focus gives him an overall grade of 87.8, which is 3rd among wide receivers in the league. Just in case anyone hasn’t realized it yet, Justin Jefferson is a bonafide superstar.

Getting Others Involved in the Passing Game

More consistent targets down the field to all of the receivers are something I would like to see. If anything, it’s Adam Thielen and KJ Osborn who we need to see more involved. Thielen was heavily involved the first four weeks but was anonymous against the Lions bar one dropped catch, until two catches in the final drive of the game.

After breaking out in the opening two weeks, things have slowed down somewhat for KJ Osborn. Keeping his production high will serve to open up the offense. There are plenty of other options in the passing game too. Tyler Conklin has proved himself a safe pair of hands and is capable of making plays. Dede Westbrook got involved more than previous with three catches on four targets. The one he missed was close to a touchdown, but the pass was underthrown — a little positive that’s been primarily overlooked from the Lions contest.

Before the Lions game, Jefferson was asked how he felt about the team 1-3 start. He responded by simply saying, “I’m used to winning,” which he sure is — winning the national championship in college with LSU. Being drafted by a team expected to compete and personally performing at a high level, Jefferson will surely be disappointed with how his team has fared so far. After the Steffon Diggs situation, any hint of unhappiness from Jefferson is bound to cause anxiety amongst Vikings fans. It’s far too early to be genuinely worried about that.

The Vikings do, though, need to make the most of Jeffersons’ rookie contract. The day is coming when he will get paid a lot of money. The best way to keep everyone happy and get the best out of the offense is to keep it balanced. We don’t need to force the ball to one player or to establish the run no matter what. The run game can open up the passing game, but also the passing game can open up the run game. Force defenses back to cover Jefferson, Thielen,  Osborn, etc., and it will open up big holes for Dalvin Cook and Alexander Mattison. The Vikings are blessed with an abundance of offensive playmakers. They should use them all.

As with everything in life, finding the right balance is the key to the success of the Vikings offense. The coaching staff needs to find that balance, and they need to find it now.