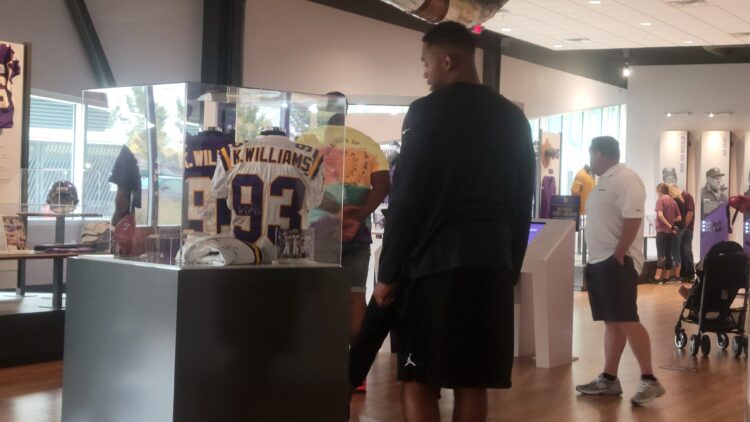 Vikings great Kevin Williams will be inducted into the Ring of Honor at halftime of Sunday’s Cleveland Browns vs. Minnesota Vikings game. The ceremony should go off without a hitch. The start to his Vikings career – – not so much.

During the 2003 NFL Draft, the Vikings failed to submit the draft card for Williams on time. Minnesota held the 7th overall pick in the draft and was reportedly in trade discussions with Jacksonville (8th) and Baltimore (10th). While negotiating parameters for a potential trade, the time elapsed on their pick. Jacksonville and Carolina (9th) quickly submitted their picks before the Vikings. The selection – Kevin Williams, DT from Oklahoma State.

Williams started 42 games at Oklahoma State, compiling 160 tackles and 18.5 sacks over four seasons. He followed up his senior season with a phenomenal showing during the Senior Bowl — the Vikings would notice. Some draft pundits projected Williams as a defensive end, and some even labeled him as the dreaded one-year wonder.

The Vikings had no such reservations.

With no true pass-rush option on the roster and holdover Chris Hovan manning the three-technique, Minnesota would line Williams up at left defensive end during his rookie campaign to take advantage of his quickness off the ball.

Williams racked up 10.5 sacks, 15 tackles for loss, and 51 tackles. By all appearances, the Vikings had a promising prospect on their hands.

In his second year, the Vikings kicked him inside to defensive tackle with the addition of 2004 first-round pick Kenechi Udeze, a defensive end out of USC. Udeze, while solid as a pro, would never materialize as a pass rusher his draft pedigree demanded. Williams would flourish inside, though. He ended his second season with 11.5 sacks, 70 tackles, 13 tackles for loss, and his first touchdown. The 2004 season would also bring Kevin his first taste of the playoffs as the Vikings would beat the Packers before losing to the Eagles in the divisional round. 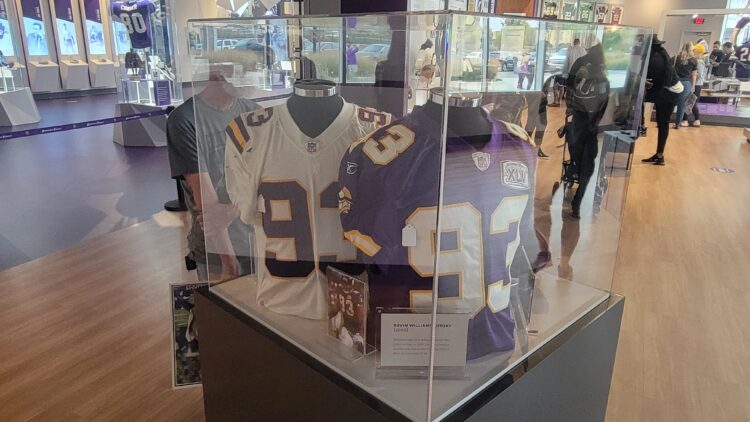 In 2005, the bricks would come out with the signing of free-agent defensive tackle Pat Williams. Both he and Kevin would form The Williams Wall. Except for their inaugural season together (19th overall), they would dominate opposing rushing regimes. From 2006-2008, they would allow the fewest rushing yards per game, in 2009 the second-fewest, and in 2010 the ninth-fewest. The 2010 campaign would also bring about the retirement of Pat Williams at age 39 and the end of the Williams Wall dominance.

Williams would finally be paired with a premier pass rusher in 2008 as the Vikings traded for Kansas City defensive end Jared Allen. The two would continue to play together through the 2013 season, forming a formidable 1-2 pass-rush punch during that time. A portion of Allen’s success with sacks was attributable to the double-teams opponents applied to Kevin. He was that damn dominant. Teams would rather leave Allen one-on-one most of the time than have Williams bully their guard or center straight up.

Spent time with my Vikings Ring of Honor brothers at an Alumni Weekend reception last night. Thanks, Vikings! Steve Jordan and Kevin Williams and I capitalized on a photo op. Great to be welcoming Kevin into the club. pic.twitter.com/0aqDIyx4KZ

It’s fitting that an old-school style player like Williams, one who eschewed the use of a mouthpiece for a stick of Juicy Fruit gum, would be included in a storied list of Ring of Honor names. He sees it as an honor, especially to be named along with the numerous defensive line stars the Vikings already have in the Ring of Honor. Names like Chris Doleman, Carl Eller, Jim Marshall, Alan Page, Randle, and now Williams. This is an honor he earned. 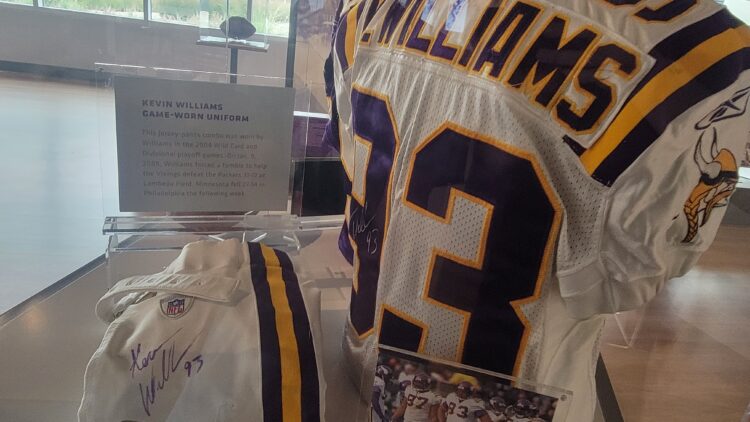 Coming into the league and taking over the number of a Vikings legend and future Hall of Famer in John Randle is never easy, nor would it be recommended. For Williams, it just kind of happened. The team asked him after he was drafted what number he would like, and he chose 93. He was unaware that Randle had previously worn the number and of the specific resume he had obtained while wearing purple. He quickly realized the gravitas of the situation, knowing that he had much to live up to being the 9th overall selection and taking on number 93.

He did, expeditiously, and never looked back.