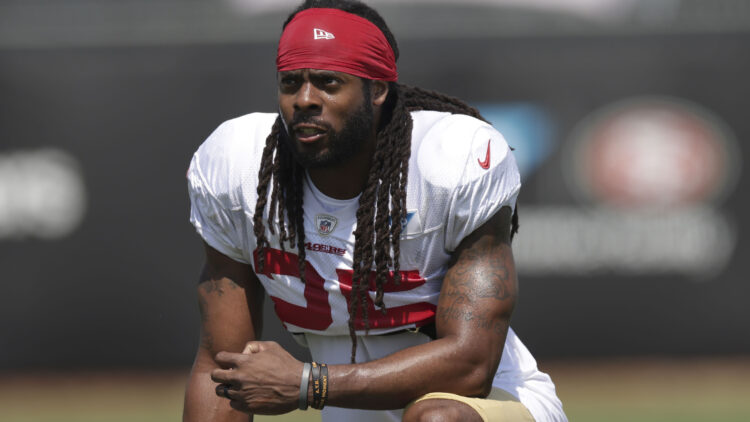 The Minnesota Vikings free agency thus far has been paltry when compared to the acquisition juggernauts like the New England Patriots or Arizona Cardinals. General Manager Rick Spielman has jettisoned more players than he has signed — and some of those departing names were longstanding personalities. For instance, Kyle Rudolph, Riley Reiff, Dan Bailey, and Shamar Stephen all said sayonara during the last two weeks.

The roster is changing. Not fundamentally — but in bits and pieces.

And the depth chart might experience more big-name change if Wednesday’s rumors are true. Richard Sherman abruptly posted his career statistics via Pro Football Focus on free agency’s first official day. These numbers were not asked for or provoked. He just decided to share.

A Decade of work! pic.twitter.com/9ohlUkAIYR

This is evidently the tweeting of a frustrated free-agent man — one that probably isn’t commanding the money he foresaw when the week started.

Naturally, that lands Sherman on top of the Vikings rumor mill.

Keep an eye on Richard Sherman and Mackensie Alexander #Vikings

Sherman-to-Vikings or Alexander-back-to-Vikings is not confirmed, but the noise is out there. The Vikings are theorized to have reworked Adam Thielen’s contract, enabling the team more cap space to pursue players. And that purportedly means Sherman or Alexander might wear white horns on their helmets this September.

2019 was the last healthy season for Sherman — and he was marvelous. He tallied an 88.9 PFF score two years ago, and that was propped up by a blistering 90.1 coverage grade. He only played in five games during the pandemic season as the San Francisco 49ers were ruthlessly beset by a flurry of impactful injuries.

Minnesota employs young cornerbacks in Cameron Dantzler, Jeff Gladney, and Mike Hughes, so a presence like Sherman — or Alexander — would be an apropos boost to the secondary.

Too, head coach Mike Zimmer loves his corners, tracing back to his defensive-back-coach roots with the Dallas Cowboys.

Now — it is a matter of money. Sherman will not relocate to Minnesota for peanuts or anything remotely close to a veteran minimum. He can still play at a high level and could even spend some time at safety.  Other older cornerbacks throughout Vikings history have made this transition seamlessly in their “later” years.

The Vikings are sitting on a few more signings as evidenced by their cap maneuvering. The next several hours should determine if Sherman or Alexander is in the cards for 2021.