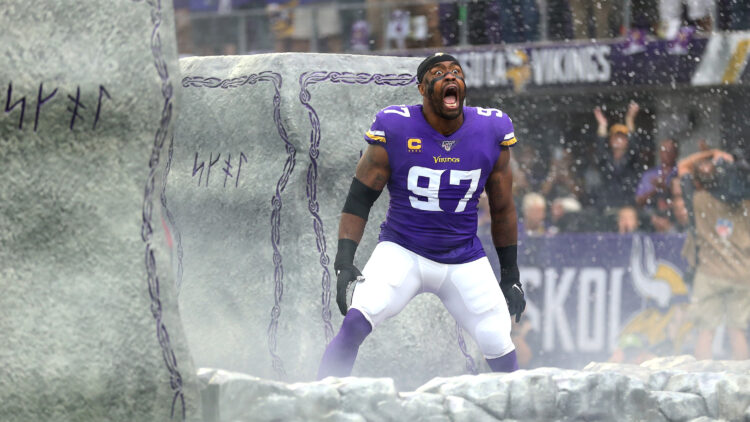 The Minnesota Vikings will re-sign Everson Griffen this week, barring an unforeseen and last-minute change of heart.

Reunion: The #Vikings are expected to sign veteran pass-rusher Everson Griffen, who worked out for his old friends last week, source said. Griffen had 6 sacks last year for the #Cowboys and #Lions, but spent every season prior in Minnesota.

Spending 10 full years in Minnesota, Griffen departed in early 2020 during a mass exodus of Vikings defensive personnel. Xavier Rhodes, Linval Joseph, Trae Waynes, Mackensie Alexander, and Griffen all vamoosed as general manager Rick Spielman faced intense salary cap restraints. It took one year for Spielman to finagle the cap to a favorable standing, and he welcomed back Alexander and now Griffen to the roster this offseason.

First, Griffen traveled to Texas, starting his pandemic season with the Dallas Cowboys. He was later traded to the Detroit Lions and reunited with Adrian Peterson for about half of a season. Here’s the skinny per Pro Football Focus from those endeavors:

And this would have been the best pass-rushing grade on the 2020 Vikings outside of Yannick Ngakoue, who was traded to the Baltimore Ravens during the Vikings week last October. Minnesota’s defense struggled tremendously last year, so even a hypothetical Griffen presence on the 2020 roster wouldn’t have changed much.

However, with clean bills of health, Spielman rebuilt the defense with free agency. Griffen, at age 33, is the cake topper for the free-agent frenzy. This is the haul for new veteran faces:

The return of Griffen also aids Danielle Hunter, a player that missed all of 2020 with a scary neck injury. Hunter has never played a professional football game without Griffen somewhere on the roster. He’s habitually been Griffen’s running mate and inconveniently never received the chance last year to test life without Griffen. The wait will continue.

A run-it-back engagement with Griffen felt unlikely for most of the offseason because the USC alumnus tweeted rude and random things about the Vikings – particularly Kirk Cousins – back in January. First, Griffen hinted he wanted to return to the Vikings. Then, he called Cousins “ass.” The tweet was later deleted while Griffen stopped tweeting about everything altogether. Evidently, his unkind posts about the Vikings were reconciled this week in Eagan – something adults do despite what social media will tell you.

Griffen has three weeks to acclimate to the 2021 Vikings. He must dethrone Stephen Weatherly and D.J. Wonnum for the RDE role. So far, Weatherly and Wonnum are the frontrunners for the job with a slight advantage trending toward Wonnum because of an impressive training camp. Although, Weatherly is listed as the RDE1 on the team’s current unofficial depth chart.

But if Griffen can prove he’s relatively the same player from 2019, he won’t need much time to “learn” the Vikings defense. Harrison Smith, Anthony Barr, and Griffen are the only defensive players leftover from the 2014 team, the season that Zimmer took over operations. Griffen knows Zimmer. Zimmer knows Griffen.

There is no word yet on the financial figures from the soon-to-be deal.