Whatever you think about Bradbury, it’s MUCH worse

One topic has made the rounds in Minnesota Vikings media this week and it’s the re-grading of each NFL Draft from the past five seasons by Pro Football Focus. Namely, they pointed out the worst draft pick per team since the 2017 Draft.

Many in Vikingsland immediately presumed that one Laquon Treadwell would easily take the cake as the honoree in that regard, but no, instead now third-year center Garrett Bradbury ended up as the worst pick by the Vikes.

We even covered it here. 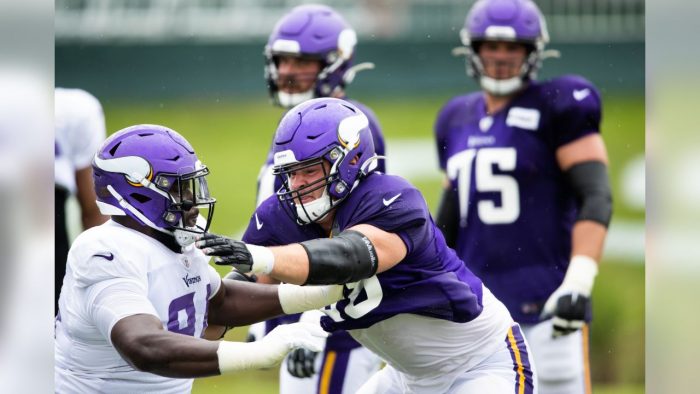 The Vikings’ selection of Bradbury has layers of mistakes packed into it. It torpedoed the career of Pat Elflein, whom they drafted the year prior as he was far more suited for the center position. He also is more than likely going to continue to put them in that no man’s land for years to come.

That’s because he’s good enough in the run game to not be replaced, but a liability in pass protection. He has earned pass protection grades of 41.4 and 38.8 in his first two seasons. The icing on the cake is that the next two centers drafted — Elgton Jenkins and Erik McCoy — are two of the best interior linemen in the NFL.

Now, as stated in the intro this is something that other sites have covered a lot so the question is why we’re covering it a day late. The answer? Because we’ve got some interesting insight into Bradbury’s game that might give him a bit of a break (or at least, spread the blame around a bit).

About a month ago I reached out to a few current and former offensive linemen and coaches to get some insight into Bradbury’s game. The initial reasoning behind that was there were two schools of thought regarding Bradbury’s 2020.

The first was that he was a bust. The second was that centers take 3-5 seasons to develop, thus it’s far too soon to determine whether or not Bradbury was a bad pick.

The answers may surprise you.

We ended up watching a lot of tape from Bradbury’s 2020, and the former linemen said:

“I have no reason to think Bradbury will necessarily be a bust but he is playing very poorly right now. Bad footwork, no anchor in pass pro, off balance constantly. The most shocking thing is the lack of awareness. Looks lost on the field a lot. When I say bad footwork too I mean it’s loose. He can move his feet but he’s taking massive steps on reach blocks and play action sets and making it so he literally can’t take a second step. Showed up over and over again against Tampa.”

During our meeting(s), one of the linemen also asked who was coaching the Vikings offensive line.

“The reason that I asked about the OL coach is because the whole OL plays like shit. They look completely unprepared to play to me. It’s bad right now dude. Really bad. I’m sure there’s plenty of talent but it’s not showing up.”

“Anyone that blames Kirk for what is going on is out of their mind. He had an exceptional OL when they were healthy in Washington, aside from Spencer Long, and the OL there was run by a technician in Bill Callahan. When you watched the OL there things were intentional, every single guy on the Vikings OL plays with different technique. Sometimes a certain guy will do a certain thing different to suit his abilities/skill set but here it looks like the Vikings OL doesn’t even have a coach. It looks like they get handed a piece of paper and someone says, go ahead and figure it out on your own.”

Not only was Bradbury a bad pick with better options after him, but from what I’ve heard from multiple people in the know? He never really stood a chance. Who knows, he may have developed into something special elsewhere, but the Vikings’ offensive line is bad and has been bad (and getting worse) because in every possible way they’ve failed.

They’ve failed to identify, draft and develop talent. They’ve failed to coach them up. They’ve literally sabotaged their own line in practice if someone on the line calls out the blitz package they see across from them. You know, something you actually want your linemen to do?

This is a top to bottom systemic failure that epitomizes the Zimmer era and it’s that reason that Bradbury is the right selection for the worst draft pick since 2017 in Minnesota.