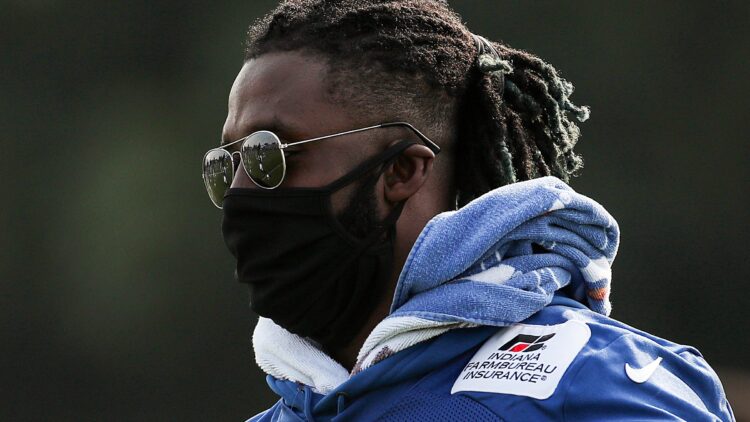 With the NFL trade deadline slightly over one week away, the Minnesota Vikings traded defensive lineman Stephen Weatherly and a 2023 7th-Round draft pick in exchange for a 2022 7th-Rounder to the Denver Broncos on Saturday.

Evidently, the Vikings are content with Everson Griffen’s redemptive return to the team while second-year D.J. Wonnum gets the rest of the right defensive end snaps. And with Weatherly’s departure to Denver, rookie Patrick Jones II should see some playing time (finally) in 2021. So far, Jones has an ominous goose egg for snaps this season.

Not so fast, according to Pro Football Focus.

Before the Weatherly trade occurred, Brad Spielberger from PFF outlined a plethora of trades for NFL teams, and the Vikings received a mention. Spielberger claimed the Vikings ought to be in the mix for an Indianapolis Colts defender.

His name is Kemoko Turay, a 2nd-Round pick from the 2018 NFL Draft.

Turay is injured right now — a periodically trend for him since entry into the league — and is otherwise trapped on the Colts depth chart behind Kwity Paye and Al-Quadin Muhammad. So, PFF lined up a Vikings 6th-Round draft pick for Turay to Minnesota. Spielberger opined:

“Turay has played sparingly over three seasons and through Week 5 this year, with his career-high (383) coming as a rookie, but he has a career pressure rate of 14% and registered two sacks against the Miami Dolphins in Week 4. An ankle injury has limited Turay throughout his young career, but he flashes when healthy and excels at one very valuable skill: getting after the quarterback.  Minnesota Vikings edge defender Danielle Hunter has 18 quarterback hurries through Week 5, while the rest of the Minnesota Vikings edge rushers have 19 combined. Turay provides another presence to deploy off the edge in obvious passing situations as Minnesota works to climb back into the NFC playoff hunt.“

Minnesota might be movers-and-shakers at the trade deadline — they need a cornerback more than an EDGE rusher — but the Turay idea seems unlikely if the franchise just traded away a Turay-like player in Weatherly.

Turay has never played more than 50% of defensive snaps in a single season and participated in more than seven games in a season just once — three years ago during his rookie voyage.

In limited playing time, this is the PFF grade resume for Turay:

The safe bet is to assume the Vikings like their depth pass rusher, Patrick Jones II, chiefly because the veteran player, Weatherly, was just sent westward via trade.

Turay is an intriguing idea — he was highly touted in the 2018 draft cycle — but his injury status is a concern. The Vikings foursome of Hunter, Griffen, Wonnum, and Jones is likely the combo to grab all defensive snaps in the remaining 11 games.

Also Read: For Vikings, the Term ‘Rebuild’ Should Be Nowhere near Your Vocabulary