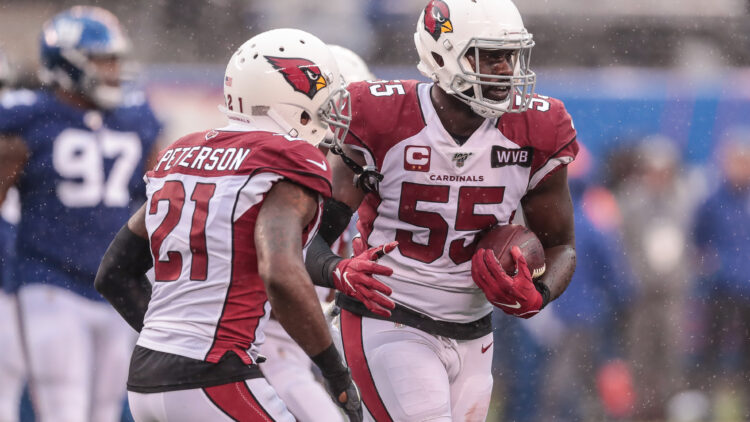 The offseason was unfolding swimmingly for the Arizona Cardinals. Kyler Murray enters Year Three with expectations for an MVP-like jump. DeAndre Hopkins is the team’s handsomely-paid wide receiver, due like clockwork for 1,200+ receiving yards per season. J.J. Watt even elected to toss a bird on his helmet after signing in the desert.

But on Sunday, long-time Cardinals pass rusher Chandler Jones was reported to prefer a change of scenery.

All-Pro pass rusher Chandler Jones requested a trade from the Arizona Cardinals this offseason, per sources. Jones has been unhappy with his contract and future with the team. Cardinals don’t want to trade him and expect him to report to camp. But certainly a situation to watch.

The Minnesota Vikings, a team arguably in need of a true-blue starting defensive end opposite Danielle Hunter, joined the Jones rumor mill as Vikings fans clamored for a swap of assets.

Jones, like Hopkins, earns a lot of money with the Cardinals — his cap hit in 2021 is $20.8 million — so a relationship with the Vikings would necessitate creative cap dealings.

New Vikings cornerback Patrick Peterson, who spent a decade with the Cardinals, endorsed a Jones-to-the-Vikings outcome on Monday when the miniature rumors heated up.

“No doubt about it.” Patrick Peterson on if he’d welcome Chandler Jones to his new team the Minnesota Vikings.
The Arizona Cardinals host the Vikes Week 2 for their 2021 home opener in Glendale.

Peterson and Jones spent five seasons together in Arizona before Peterson made the trek northeasterly to the Twin Cities. In that timeframe, the two men combined for five Pro Bowl appearances. Since joining the NFL in 2012 — the same season the Harrison Smith was drafted — Jones leads the league in sacks with 97.0. His closest suitors in this metric during the last nine seasons are J.J. Watt (95.5) and Von Miller (94.5).

Although unlikely because of salary cap limitations, Jones would be a mammoth addition for the Vikings. Minnesota ranked 32nd in the NFL for pass-rushing performance in 2020, floundering without Everson Griffen (who left via free agency) and Danielle Hunter (missed the 2020 campaign with a neck injury).

A pairing of Hunter and Jones would be otherworldly for Minnesota. Jones missed 11 games in 2020 because of a bicep injury, but it was the first time since 2014 that he tallied less than 11 sacks in a season. The man is a sack savant.

Almost all of the Jones-Vikings fascination in the last 24 hours is derived from Vikings fans or Vikings-linked online entities. But Peterson’s proclamation that he’d welcome Jones to Minnesota with open arms makes the rumor a tad more credible.

Jones isn’t the first Cardinals alumnus to enchant Vikings fans — for nearly a half-decade, the dream of hosting Larry Fitzgerald in Minnesota serves as an annual fantasy for Minnesotans. For now, it is unclear if Fitzgerald will play anywhere in 2021.

Too, general manager Rick Spielman is no stranger to trading assets for a high-profile defensive end. Late last summer, the Vikings shockingly traded for Yannick Ngakoue from the Jacksonville Jaguars who, like Jones, was disgruntled with his state of affairs. Spielman sacrificed a 2nd-Round pick for the Ngakoue experiment, and it ended messily. Ngakoue struggled to jell with Mike Zimmer’s defense, culminating in a bye-week trade to the Baltimore Ravens some six games into his Vikings career.

As for “price,” Spielman would probably have to dangle another 2nd or 3rd-Rounder in front of the Cardinals front office. Outside of 2020, Jones is still considered one of the NFL’s premier pass rushers even at age 31.

And just to ensure the finances add up, Minnesota would likely have to include a player contract from the existing roster — one with a relatively sizable price tag. Otherwise, Spielman could attempt to renegotiate Jones’ deal on the spot, backloading the heft of the contract for future years.

The Vikings training camp kicks off on Wednesday in Eagan.