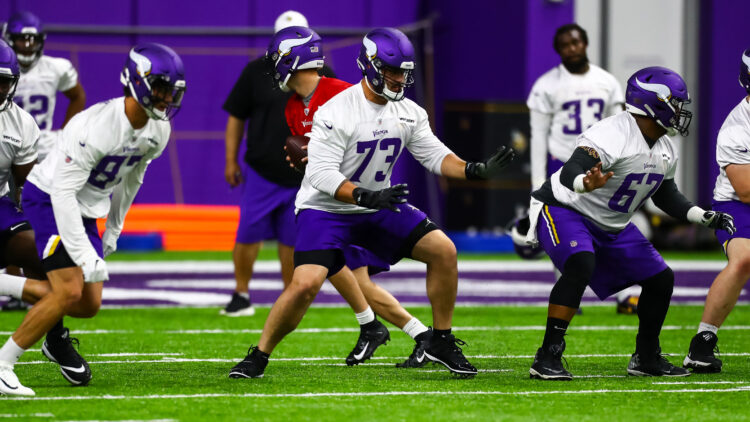 The normal tendency at this time of the offseason for Minnesota Vikings fans is to cringe and hope on the upcoming outlook of the offensive line.

The Vikings pass protection is a longstanding, head-scratching ordeal, always seeming to live at the back of the priority list. And the numbers confirm the lackluster performance.

The run-blocking scheme executed by head coach Mike Zimmer and friends usually appears competent — probably because of the wizardry of Dalvin Cook and Adrian Peterson [in 2015] — but keeping men like Kirk Cousins and Sam Bradford upright has plagued the organization.

General Manager Rick Spielman hasn’t ignored the problem, though. In every draft since 2018, he’s selected an offensive lineman in the 2nd Round or higher, signaling that he vividly understands the problem. This remedial strategy has welcomed the likes of Brian O’Neill, Garrett Bradbury, Ezra Cleveland, Christian Darrisaw, and Wyatt Davis to the team.

And now that fivesome is causing onlookers of the team some unfamiliar optimism. Minnesota — for once — isn’t patchworking its way to OL solutions. Conversely, youth and draft capital serve as the model for improvement. Much of this enthusiasm from fans rests in the first-year hopeful production of Darrisaw and Davis — the trajectories of those players are more exciting than the veteran ceiling of players like Dakota Dozier or the departed Pat Elflein. It will feel emotionally more salvageable if rookies Darrisaw and Davis encounter growing pains than Dozier and Dru Samia struggling, again. That’s just the way it goes for youth. Youth is given more slack than bonafide examples of veteran poor performance.

Indeed, Vikings faithful are high on the offensive trenches, chiefly because there is a plan. But the national masses have not recognized the Vikings roster strides.

Pro Football Focus still ranks Minnesota as the league’s sixth-worst offensive line heading in 2021. Ordinarily, that would feel about right. Yet, this group feels more promising — just not for national punditry. Steven Palazzolo of PFF wrote about the Vikings protection upfront:

“The interior is where the Vikings have had their issues, especially in pass protection. Center Garrett Bradbury is a prime example — he’s been far better in the run game but ranked last and second to last in pass-blocking grade among centers in his two NFL seasons. Ezra Cleveland started at right guard down the stretch, and he’ll slot in there again in 2021. Cleveland profiled similarly to Bradbury, grading out at a solid 67.5 as a run blocker but just 52.0 in pass protection. The left guard spot has two options in Mason Cole and third-rounder Wyatt Davis. Cole has two full seasons under his belt, but both were at center. He earned grades of 53.6 in 2018 and 54.4 last year. Davis battled through injury in 2020 at Ohio State, but he looked like one of the best guard prospects in the draft after his 2019 performance. The Vikings’ offensive line has a new look this season, and the unit’s ability to move up the rankings may be dependent on two rookies and one second-year player.”

The Vikings will have 17 games to ascend these rankings as the offensive line jells. But it is all contingent on the youth infusing together. For now, that remains to be seen — and probably acts at PFF’s we need to see it first mentality.

On the whole, Minnesota’s offensive line will be a barometer for the long-term prognosis of Zimmer. His employment began in Minnesota in 2014. Just once — the pass protection was decent. Wouldn’t you know it, that was the season the Vikings reached the NFC Championship.

Production in the trenches is the hallmark of football. If Zimmer cannot fix the pass protection in Year Eight — and the team suffers another mediocre season — why would 2022 be any different?