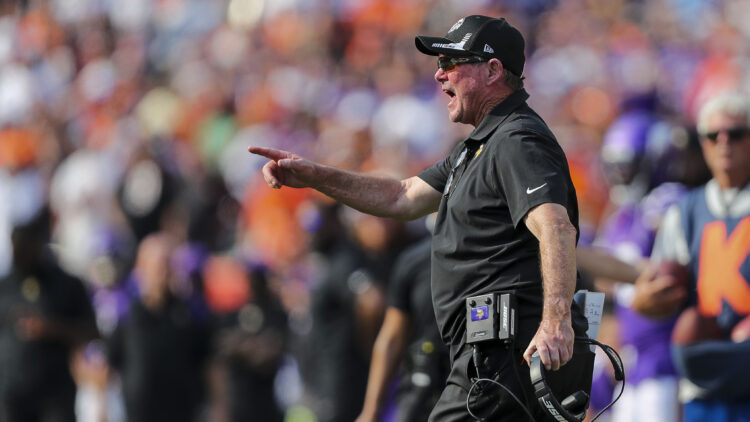 In the most topsy-turvy Week 1 game of Mike Zimmer’s head coaching career, the Cincinnati Bengals outlasted the Minnesota Vikings 27-24 in overtime on Sunday. Dalvin Cook fumbled — although FOX announcers claimed his buttocks were down before the ball popped out — and the Bengals found victory on the leg of a rookie kicker.

The Vikings defense shined early on, forcing Cincinnati to punt repeatedly out of the gate. Then, the penalties started.

All told, Minnesota was responsible for 17 flags, an abhorrent amount for any Pop Warner, high school, college, or professional team. And this is the same Vikings team that finished 2020 with the NFL’s eighth fewest penalties.

The offensive line was unfit for professional operations in the first half, racking up false starts and holding infractions like a malfunctioning pinball machine. Once the second half commenced, the offensive line flags cooled off, and — surprise, surprise — the Vikings offense settled in. Minnesota even rallied back from a 21-7 deficit — which felt miraculous the way penalties were oozing into the grass.

Tabulating 17 penalties should disqualify a win on any Sunday afternoon, but Minnesota faced a non-elite opponent. The comeback was feasible, even if Zimmer’s bunch could’ve wholly avoided the initial 14-point deficit.

While penalties are assessed to players 99.9% of the time in the NFL, a coaching staff is considered accountable — good and bad — for the number of infractions inside a game and throughout a season. Normally. the Zimmer Vikings are in the top half of the league for fewest penalties. But not against the Bengals — a game officially starting the clock on Zimmer’s make-or-break year.

The Vikings have no cushion. There are no “gimmes” on the schedule until Week 5 versus the Detroit Lions, and even the Lions are due to topple Minnesota at some point. The Lions have fallen short to the Vikings seven consecutive times.

It may sound like an exercise in revisionist history, but the Bengals game was winnable if the penalties were held to a rational number. That simply didn’t happen. And for the purple and gold to rely on “breaks” or “good mojo” is laughable for a historically snakebitten franchise. That was transparent when the NFL’s replay officials awarded the football to the Bengals when it reviewed Cook’s so-called fumble.

Highpoints were visible, too — just not bright enough to propel the team to victory. Michael Pierce was fantastic. The punter was clutch — when’s the last time you read a Vikings article with that nugget? Although rusty on a few throws, Kirk Cousins did his job with under two minutes to go in 4th Quarter, a situation in which many fans erroneously savage him more often than not. Adam Thielen’s career decline was rescheduled for a season way into the future. Finally, Greg Joseph, a kicker largely not battle-tested, saved the day with a 53-yard field goal, sending the game to overtime.

Zimmer likely needs a playoff appearance, playoff win, and maybe more to solidify his job security beyond this season. There is certainly time to rectify the Cincinnati blunder, but the 17 penalties were emphatically a nasty method to set a tone.

So, pick [two of] your poison — Minnesota now has must-win games against either the Cardinals, Seahawks, or Browns.