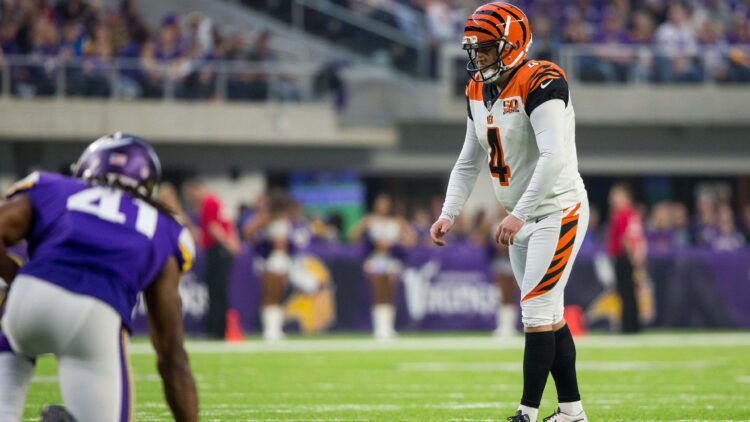 As home underdogs in the 2020 season opener, the Bengals led 13-6 heading into the final quarter. But the debuts of No. 1 overall pick Joe Burrow and new head coach Zac Taylor were spoiled thanks to 10 unanswered LA Chargers points, a nullified AJ Green touchdown, and a missed 31-yard field goal by Randy Bullock.

In 2021, the Bengals once again find themselves as home underdogs in the opener. But there shouldn’t be as much drama in this one. The Vikings come into their Week 1 matchup with the Bengals on the right side of several personnel mismatches and it should result in them coming out of that matchup with a 1-0 record.

Let’s take a closer look at this matchup.

When the Vikings Have the Ball…

…a healthy dose of ‘21’ and ‘22’ personnel early in this game is just what the doctor ordered and will lead to opportunities for the Vikings pass-catchers in the middle stages of the contest.

Cincinnati’s only realistic chance of defending the Vikings is to be disruptive before Kirk Cousins distributes the football. This is generally the case for any defense against any offense, but it’s especially the case in this contest because Cincinnati doesn’t have the talent to go blow for blow with the Vikings past the line of scrimmage. The personnel mismatches at cornerback/receiver and the dazzling playmaking ability of Dalvin Cook will be too much for this group of Bengals defenders.

The key matchup(s) will be the Vikings front five against the Bengals front four. On this front, there’s good news and bad news for the Vikings…

The Bengals will be without top CB Trae Waynes and, thus, will be in no position to stop or maybe even slow down Justin Jefferson and Adam Thielen. If Cousins has even decent protection, the Bengals secondary is vulnerable. They have quality talent at safety, but they don’t have that or any quality depth at CB.

As much as offensive coordinator Klint Kubiak must be licking his chops to deploy his dynamic duo of WRs against this undermanned secondary, he will be best served to lean on Cook early to keep the Bengals front four honest and to tax them.

When Cincinnati Has the Ball…

…it will be largely a sub-package game in which the Bengals deploy ‘11’ personnel as frequently as possible to leverage mismatches in space against more veteran and less explosive defenders who will be charged with coverage responsibilities.

The Bengals have some talent at the skill positions. In the backfield, Burrow and RB Joe Mixon will give most defenses plenty about which to think. Cincinnati has surrounded Burrow with legitimate playmakers at WR in veteran Tyler Boyd as well as youngsters Tee Higgins and Ja’Marr Chase. While the Vikings were aggressive this past offseason in addressing needs at CB by signing veterans Bashaud Breeland and Patrick Peterson, it’s hard not to give the edge here to the youth and explosiveness on the Bengals side.

What Cincinnati has done at offensive tackle will only enhance the advantages they have in the skill positions. They signed veteran RT Riley Reiff, giving them a solid albeit short-term solution on the edge. At LT the Bengals have 2019 1st-rounder Jonah Williams, giving them a bonafide blindside protector for Burrow.

Where things get interesting on this side of the ball is in the middle of the field. Although no one has seen it in a regular season game with them as a Vikings tandem, DTs Michael Pierce and Dalvin Tomlinson will give the Bengals interior OL all they can handle. Both are stout run defenders but both also have the nimbleness to be effective on passing downs. Throw in the double-A gap antics and disguise-happy approach from the Vikings defense, even without Anthony Barr possibly, and it’s clear there is a decided advantage for the Vikings defense on the interior in both the passing game and running game and that advantage extends up to the second and third levels.

When the Game Is Over…

…the Vikings will be 1-0 thanks to a bevy of explosive plays by their offense that put too much pressure on Cincinnati’s offense to counter. While the Bengals have the skill players on offense to score, they may have to probe a bit during their first few series to find the soft spots in Zimmer’s defense. Meanwhile, the Vikings offense shouldn’t struggle to move the ball. This will allow them to score early, build a lead and force Cincinnati to become one-dimensional – and, thus, less effective – on offense.

Vikings fans will feel great about how their offense looked, especially coming off an underwhelming preseason, and they’ll feel cautiously optimistic about the defense knowing the Week 1 outcome was good but also knowing it was the offense that carried the day.