Note: This article originally appeared on our brand new sister site, MinnyIce.com! MinnyIce’s 🥅 is to be the epicenter of Minnesota hockey culture, news, podcasts and discussion! So, check out that site each day and follow it on Twitter by Clicking Here. 🏒

Also, for those of you that aren’t old enough to have witnessed this, you can catch it on YouTube here in both the age-restricted and all-ages format (which, by itself, explains how epic this battle was):

February 22nd, 2020 marked the 40-year anniversary of the day the U.S. hockey team shocked the world by pulling-off the “Miracle on Ice,” a 4-3 upset of the Soviet Red Army Team at the 1980 Winter Olympics in Lake Placid, New York. An event so revered that February 22nd is now referred to as “Miracle Day” by American hockey fans.

On the other hand, Friday, February 26th, 2021, marks the 40-year anniversary of a game the National Hockey League would rather forget. But for fans of the North Stars, Minnesota’s NHL franchise at the time, February 26th, 1981 would not only signal the end of a 14-year hex that hung over the “Stars,” but would launch the team on an unlikely run to the Stanley Cup Finals for the first time in team history.

“The things is the North Stars had never won in Boston Garden,” says Brad Maxwell, a defenseman on that North Stars team. “So, that was a big deal.”

“The North Stars had never won there,” added then rookie goaltender Don Beaupre. “They’d go into Boston Garden and get beat-up all the time and Glen, he didn’t mind the fighting so that was right up his alley.”

“Glen” was Glen Sonmor, the North Stars Head Coach at the time. In the 14-years since the expansion Minnesota North Stars first took the ice in 1967, they had never tasted victory in the Boston Garden. 14-years had yielded a record of 0-wins, 27-losses, and 7-ties. But for Sonmor, this game in 1981 had evenmore riding on it.

“I don’t know if Glen was a prophet and kind of knew what was going to happen a couple of months down the road or what, but he was trying to set the stage,” says defenseman Gordie Roberts. “You can’t go out and play the same because it hasn’t worked before and to Glen’s credit, he knew something had to happen.”

Sonmor, and Stars General Manager Lou Nanne called a meeting at the team hotel on the afternoon of the 26th. Says Maxwell, “They had a big chalk board, and they were making matchups and they had all the Boston players and all the North Star players, and they had lines drawn between them and what they were trying to show us was that Boston relied so heavily on intimidation in those days.”

Adds Roberts, “There weren’t too many situations where a coach came in and tried to get the players all fired-up about a game that was still about six hours away, you know?”

Actually, it took just seven seconds. Right off the opening faceoff Bobby Smith, arguably the North Stars most talented offensive player and one of the last guys you would expect to drop the gloves, was scrapping with Boston’s Steve Kasper, an undersized center whose role was to agitate the other team’s best player.

“Bobby wasn’t a fighter,” says Beaupre. “He wouldn’t shy away from them, but he led by dropping the gloves and you know what? Everybody followed.”

And did they. By the time the first period ended, an hour and 31 minutes later, Referee Dave Newell had assessed 341 penalty minutes and the 67 penalties in the first period, setting a dubiousrecord that still stands today.

“It’s usually the tough guys that get into that kind of stuff but on that night, it was all the players,” says Roberts. “I was a middleweight and for guys like me and Bobby Smith, a fight happened because a guy gave an elbow, or a high stick and it just happened. But on this night, guys who were just regularplayers were looking to drop the gloves and to try to change the image of the North Stars, I guess.”

And there was no more unlikely place to do it than Boston Garden. An aging structure you don’t see any more in today’s buttoned-down NHL, and in this case the Garden’s unique characteristics only served to fuel the fight fest.

“In Boston Garden you had to go right by the Bruins bench to get to the dressing room,” says Roberts. “There was a lot of yelling and screaming from the Bruins players and their coach (Gerry Cheevers) and the penalty box was right there, and everything was just in such a confined area that it just kind of created even more bedlam.”

The fighting spilled over from the ice into the runway to the visitor’s dressing room as ejected North Stars attempted to pass by the Bruins bench. Now the free-for-all included both teams, several Boston police officers, fans, an unfortunate camera operator, and a head coach who was looking to take-on all comers.

“When it came to the fighting and the rough stuff Glen was always right in the middle of it,” says Beaupre. “He’d get worked up and that was always part of his deal, you don’t back down and you drop the gloves if you have to. It was a part of the game and he used it that night.”

Before it would end an NHL record 84 penalties would be assessed while 7 North Stars and 5 Bruins were ejected.

“I fought Wayne Cashman twice in the same game, but I ended up finishing the game,” says Maxwell. At the end of the gameboth teams had only seven players on the bench, everybody else had been ejected. We finished the game with five guys on the ice and two guys on the bench, so, it was a lot of work.”

The 406 penalty minutes assessed set an NHL record that would stand for 23-years, and the North Stars lost yet again, this time by a final score of 5-1, extending the team’s futility in Boston to 35 games without a victory. But, it turns out there was a method to Sonmor’s madness.

“It was a stand we took and it ended-up paying off,” says Baupre. “We played them in the playoffs, and we beat them three straight and two right in Boston Garden, back-to-back.

That’s right. The Minnesota North Stars, who had gone 14-years and 35-games without ever winning in Boston went back to the Garden and beat the Bruins in consecutive games, on their way to a three-game sweep of their first-round playoff series. 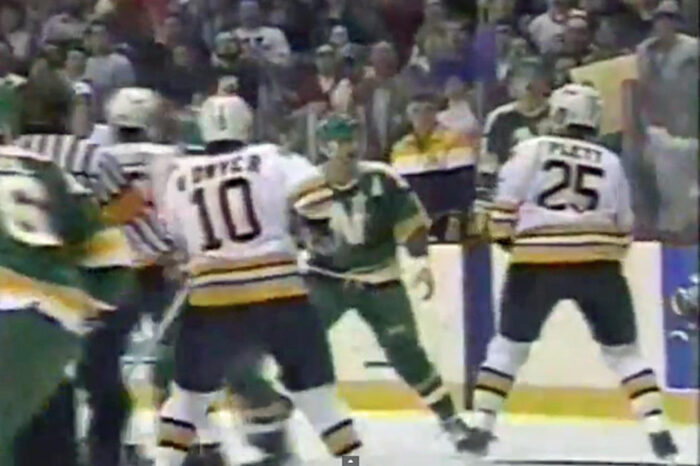 “Yeah, it just carried us on and once we got past Boston, we were feeling pretty good,” adds Maxwell. “We had a great series against Buffalo and we just got more confident the more we played.”

So confident that the North Stars upset the division champion Buffalo Sabres in the next round and the Calgary Flames in the Western Conference Finals, earning the franchise’s first-ever trip the Stanley Cup Finals. The Stars magic finally ran out against the defending champion New York Islanders, losing in 5-games, but the experience launched by the brawl in Boston is something the players still remember like it was yesterday.

“That whole playoff year was like a wonderland,” says Maxwell. “I mean, everything came together at that time, everybody knew their job and we could always hold each other accountable to that point, we weren’t shy about telling each other what to do.”

“You know, every button they pushed just seemed to work’” says Roberts. “Right up until the very end when we ran into a team that was just a little more experienced and they had a little more depth and you know, we gave them a challenge, but the Islanders were definitely the better team that year.

“What a run!” adds Beaupre. “Nobody expected it and it was just energy for two months and it was just a great time, probably the best time in my career which is sad because I played sixteen more seasons after that and never came close to duplicating anything close to that.”