Mason Cole Is Suddenly a Stud 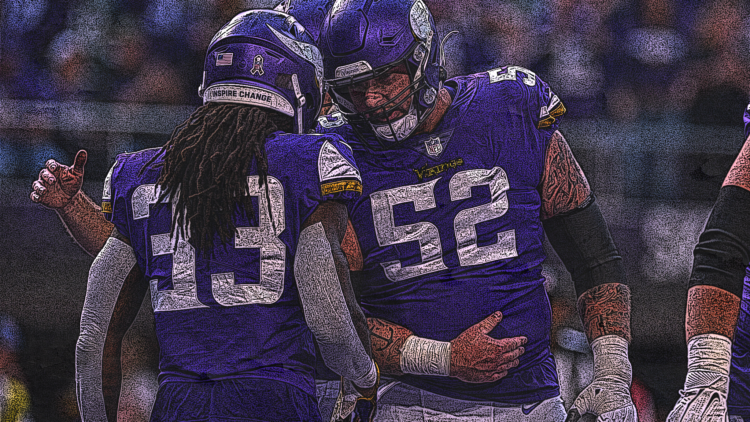 Cole is a center by trade, but the Vikings adore moving offensive linemen from their organic positions. So, fans tangibly believed Cole would replace Dakota Dozier at right guard, who started most of 2020 and struggled. Cole ultimately did not move to guard, but Dozier wasn’t re-upped as starting right guard either. That title was awarded to Oli Udoh, a player who started the season strong but soon devolved into penalties and reduced production.

Lo and behold, Cole emerged as the Vikings starting center.

Bradbury was in charge of the position for 2.5 seasons, losing his job — evidently — to Cole after Bradbury spent time on the COVID reserve list. Through some serendipity, Minnesota’s coaching staff learned Cole just might be a better center than Bradbury.

The numbers — at least through a few games — confirm it.

Suddenly, Cole is the Vikings top-graded offensive lineman, scoring a 71.8 per Pro Football Focus grade. And somehow, that tops right tackle Brian O’Neill’s score, which is 70.9 through 11 games. PFF is not without faults, but generally speaking, it serves as a reasonable indicator of player performance. For example, though, not a single Vikings fan around the globe would proclaim Cole a better football player than O’Neill.

The important part? Cole, so far, is outplaying Bradbury. That’s impactful because Bradbury hasn’t quite turned the corner for his career development. Bradbury is not a poor football player — he’s actually rather apt with run blocking — but he has not matched his 1st-Round draft stock with performance on the field.

The Vikings have until this spring to opt-in to Bradbury’s fifth-year contractual option. Doing so would cost the Vikings north of $12 million, an unlikely splurge for general manager Rick Spielman because a sort-of journeyman Cole will be undoubtedly cheaper.

Minnesota has six games remaining in 2021, so those matchups (at DET, vs. PIT, at CHI, vs. LAR, at GB, vs. CHI) will be Cole’s almighty audition. For now, he’s vividly showing Vikings brass he can be the center of the future. But career verdicts take longer than 3-4 games. His solidification at center would also mean the Vikings only need one more solution on the offensive line. The right guard spot currently owned by Udoh just cannot be wholly solved by the coaching staff. Wyatt Davis, a rookie, is on the roster, but the team is extremely standoffish about putting the Ohio State alumnus on the field.

And the bizarre part about Cole is that he truly felt like a turnstile-type reservist offensive lineman, in the mold of Nick Easton or Brett Jones for the Vikings in years past.

But nope. Cole is suddenly on track to be the starting center for the next few seasons, barring any abrupt regression.