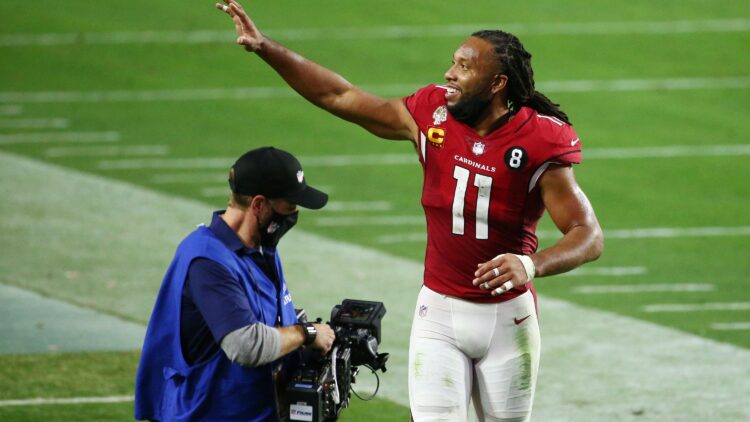 Trailing Jerry Rice by 5,403 receiving yards, ahead of Terrell Owens by 1,558 — that’s where wide receiver Larry Fitzgerald lives on the NFL’s all-time receiving pecking order as of July 2021.

Fitzgerald is a free agent.

Interviewed by Rachel Nichols of ESPN and reported by ProFootballTalk.com, Fitzgerald affirmed his open-mindedness on Friday regarding his 2021 status for retirement or returning for his 18th NFL campaign.

“I haven’t decided anything. Training camp starts in a few weeks,” Fitzgerald said. “I’m excited. It’s going to be another great year for the NFL.”

There is a school of thought that suggests Fitzgerald is holstering his decision, opting not to steal the limelight from the Phoenix Suns, who are participating in the NBA Finals for the first time in 28 years. Although, that is merely a speculative theory.

Seemingly every offseason since around 2015, Fitzgerald has been a utopian acquisition possibility for the Minnesota Vikings, a team that he once served as a ball boy. Here’s an old tweet as a receipt:

#tbt Larry Fitzgerald was once an @NFL ball boy…for the @Vikings.#MINvsAZ

Fitzgerald grew up in the Twin Cities, playing high school football at Academy of Holy Angels before heading to the University of Pittsburgh for collegiate activities. He entered the NFL in 2004 with Arizona Cardinals — staying in the desert for 16 years — earning lofty accolades all throughout. When Fitzgerald turned pro, the Vikings were busy selecting players like Mewelde Moore, Kenechi Udeze, and Dontarrius Thomas in the same 2004 NFL Draft. For the sake of context, Fitzgerald joined the Cardinals inside the same season that Randy Moss famously fake-mooned the Green Bay crowd at Lambeau Field. That’s longevity.

The Vikings — despite no firm link to Fitzgerald outside of hometown lore, something Minnesotans are good at — indeed have a spot available on the depth chart for a reliable WR3. General Manager Rick Spielman does not routinely employ a “big name” at this position — see Jarius Wright, Laquon Treadwell, Aldrick Robinson — but the free-agent addition of Fitzgerald, if only for one final hurrah, would drastically change that tendency. For now, it’s a hodgepodge of Chad Beebe, Bisi Johnson, and rookie Ihmir Smith-Marsette theorized for WR3 with training camps just weeks away.

Spielman has the cap space to explore a Fitzgerald move if enthusiasm exists for the pairing. Minnesota owns just north of $14 million in cap space as of July 9th, an impressive feat after landing Patrick Peterson, Dalvin Tomlinson, Xavier Woods, Sheldon Richardson, Bashaud Breelan, and others via free agency. The money is available for Fitzgerald if the Vikings are interested.

As a matter of common practice (outside of Jerry Rice’s wizardry), when a wide receiver hits his late-late 30s (soon to be 38 in August for Fitzgerald), signing on with a sentimental team is symbolic or poetic. And it usually entails returning to a former team. Fitzgerald, on the other hand, would actually be granted attention in the Vikings offense. Surehandedness is his most noteworthy trait, and the Vikings lost one of their handsy players in Kyle Rudolph to the New York Giants this offseason. Mix in the Vikings middling WR3 options with Fitzgerald’s otherworldly knack for catching a football — and a key pass-catching role is conceivable. Think of 3rd Down situations and redzone dealings. Those could be Fitzgerald’s moneymakers with the Vikings.

No zeal is apparent for the Vikings bolstering the WR3 spot once and for all. But if they do take that leap, a Fitzgerald merger would be a mini-version of a “where you were when?” they signed Fitzgerald moment.

The Vikings and Cardinals meet in Week 2 at State Farm Stadium in Glendale.