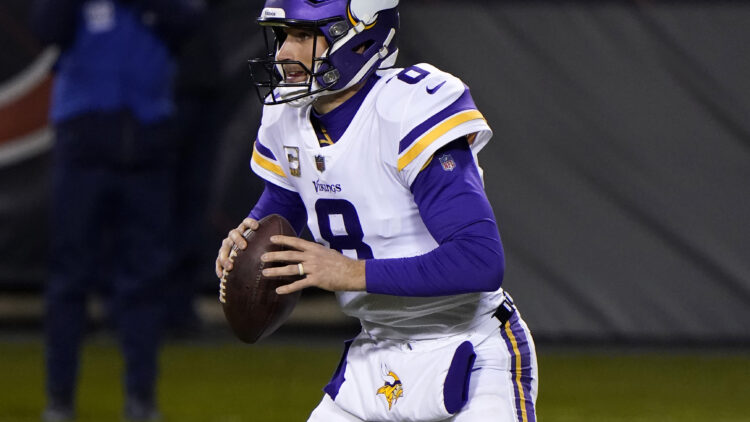 At the end of the 2020 season, Minnesota Vikings quarterback Kirk Cousins was placed at the No. 11 spot of Pro Football Focus’ year-end quarterback grades. It’s the same territory where passers like Kyler Murray, Matthew Stafford, Justin Herbert, and Derek Carr lived. For context, Aaron Rodgers, Tom Brady, and Deshaun Watson were the highest-graded signal-callers during the pandemic season. Dwayne Haskins, Jalen Hurts, and Nick Mullens were among the worst for starting quarterbacks.

Cousins routinely accrues upper-echelon PFF scores, normally hovering around #10 – sometimes tipping the scales toward the top in the month of November. Thanksgiving month is a famously good one for Cousins throughout his nine-year career.

However, when Cousins hops into the Top 10 of anything, folks get flustered. A camp of fans lasers in on “quarterback record” as an end-all stat for performance, just as a person might incessantly point at Mike Trout in baseball as the sole proprietor of the Los Angeles Angels win-loss record. That doesn’t happen to Trout, though. Why? Because baseball is a team sport, dependent on the collective output of the team on offense and defense. On quarterbacks in the NFL, they are accountable for everything – for some reason.

And that’s what follows Cousins. In the minds of the QB Record crowd, he does not do enough to carry the Vikings (or Washington Football team before 2018) on his shoulder blades. His personal, nevermind-the-team-aspect QB record is exactly average: 51-51-2 (.500). That’s the same percentage that Eli Manning possessed when he called it quits a couple of seasons ago. Cousins has started in 104 games since 2012, winding up exactly at average. Another quarterback in the annals of Vikings history, Fran Tarkenton, through 104 starts was significantly lower than Cousins via win percentage. Tarkenton was 41-59-4 (.413) in his first 104 starts. Few Vikings enthusiasts realize this – or just blatantly ignore it because it vehemently pumps the brakes on anti-Kirk fodder.

This is why a pair of 2021 QB Rankings, authored by PFF personalities, was so perplexing this week.

Here is the first batch:

Then, Eric Eager – who is not overly optimistic about the Vikings on any given day – ranked Cousins even loftier than that.

This one caused online riots because Cousins is further up the pecking order than Lamar Jackson. You will be hard-pressed to find any list or set of rankings anywhere on earth in which Cousins supersedes Jackson.

To be clear – these are not fantasy football rankings or a weird outlier criteria. Sometimes, power rankings can be misconstrued as fantasy criteria and overall ability do not exactly coagulate. But the Chahrouri and Eager illustrations above are honest-to-goodness “2021 Forecast” quarterback power rankings.

If only for a period of days, the enthusiasm surrounding Cousins is curiously high. Other lists toss Cousins down in the twenties. Chris Simms, often lauded for quarterback analysis (especially draft prognostication), situated Cousins at #16 a couple of weeks ago.

We’re about two months away from determining if Cousins is a Top 10 passer in 2021 or a mediocre one. Somebody’s gotta be wrong.