Kirk Cousins Must Be Flawless to Avoid Criticism 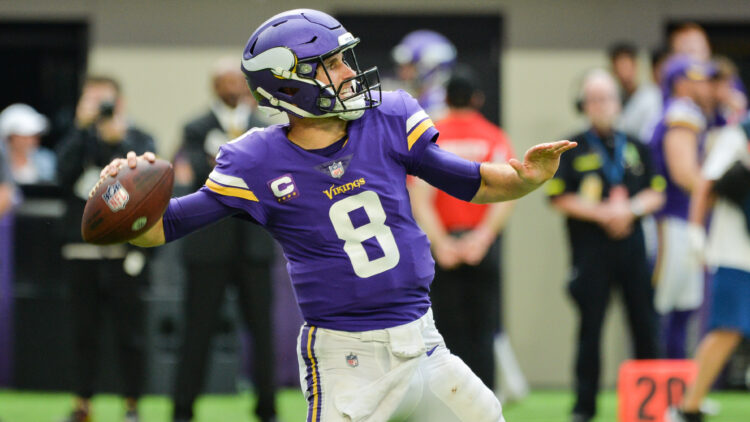 When Minnesota Vikings quarterback Kirk Cousins kicked off the 2021 season with eight touchdown passes to no turnovers in three games, folks were surprisingly pretty reasonable about his presence as the team’s QB1. Normally, Cousins is a constant topic of debate, mainly because his paycheck mandates his performance should be in a tier with Patrick Mahomes or Russell Wilson. Never mind that notion Cousins played on a $21 million cap hit in 2020 – nobody cares or acknowledges that. Instead, his detractors pivot to his future cap hit of $45 million in 2022.

Cousins was afforded pass protection in the first three games of 2021. Lo and behold, he was marvelous – and people showered Cousins with praise. In a sarcastically shocking turn of events, it turned out allotting the pocket-passing quarterback some pass protection actually worked. Boom. Cousins was phenomenal to start 2021.

Then in Week 4, the offensive line morphed back into a pumpkin. Stunningly, Cousins wasn’t very effective. He deserves personal blame, too. But on the whole, few quarterbacks in the NFL can circumvent the porous offensive trenches on display in Vikings versus Browns. If you need proof, re-watch Super Bowl LV when the aforementioned Mahomes was ransacked by the Tampa Bay Buccaneers en route to a Super Bowl loss. It’s the offensive line, stupid.

The short-lived kudos given to Cousins were erased by a single poor game. Same ‘ol Kirk was the mindset, even though his traditional performance is more akin to his Week 1-3 than the Browns stinker.

The usual suspects in Twin Cities media were ecstatic to savage Cousins. Because he did not showcase a fourth perfect game in a row, it was time to pounce. Here’s an example from the Pioneer Press:

COLUMN: Kirk Cousin had everyone fooled through the first month of the regular. But on Sunday afternoon at U.S. Bank Stadium he reminded everyone exactly who he is.

This author has a documented history of targeting Cousins for blame, so his article is on-brand.

COLUMN: While it’s not fair to blame Kirk Cousins alone for the 31-28 loss to the Dallas Cowboys, it is completely fair to want more out of a franchise quarterback when the game is on the line.https://t.co/iOJHwJ7gC8

COLUMN: On Thursday, Vikings quarterback Kirk Cousins did what he always does when the going gets tough. He deflected.

Given a chance to explain himself after missing much of this week, Cousins blamed the size of a freaking meeting room. https://t.co/6LyPXlYf2H

Kirk Cousins responds by dropping an absolute dime to Justin Jefferson. He's the most confusing quarterback back of all time.

And then the national media is elated to cover Cousins’ oft-advertised “QB Record” like he’s a tennis player at Wimbledon. Forget the other 52 dudes on the team – Cousins loses by himself.

In this example, Cousins explained why he passed the ball short to set up the final play of the game against the Browns. But the tweet’s author twists the dialogue to his liking, suggesting Cousins didn’t understand the ball must go into the endzone.

Kirk Cousins more concerned about avoiding an INT — down 7 with 8 seconds left — than taking an extra shot into the end zone.

Also, how are Zimmer and Kubiak not in his ear saying “two shots into the end zone here” …?

His attempted ‘mic drop’ of “Think about that” wants you, the reader, to believe Cousins was clueless on the final drive. He wasn’t – he merely wanted a crack closer to the goal line for a final toss.

You know, like Brett Favre in 2009 against the San Francisco 49ers. Favre checked down to Bernard Berrian in hopes of establishing a closer heave at Greg Lewis. In this set of tweets, the author of the screenshot was totally clueless Favre set up his famous 49ers touchdown with a short pass at all. Just totally oblivious. The irony? Cousins was replicating Favre’s strategy, absolutely nullifying the purpose of the tweet intended to make Cousins look like a moron.

I love it here. pic.twitter.com/bgoLghM2Fa

Indeed, Cousins authors lousy football games. It’s how it works. Since joining the Vikings in 2018, Cousins has four games with a passer rating south of 70.0 (yesterday’s was 66.9). In the same timeframe, Tom Brady has seven such games. Josh Allen has 10. Baker Mayfield has 11. Aaron Rodgers also has four. Deshaun Watson has five.

“Cousins Criticism” is a uniquely a him thing. The roots of his divisiveness as a public figure are unknown. It might just all be the big contract.

Yet, every single Sunday in the autumn and winter, NFL quarterbacks have poor games. Cousins’ versions of these poor outings are skewered like none other. His great games are wholly washed away by underwhelming ones.

It’s like a practice in media-driven sadism to shame him. They crave his failures. His play needs to be flawless each week to avoid pitchforks.

The only solution must be to surround Cousins with pass protection. Otherwise, the cycle is endless.