Kill Shot: The Drive That Knocked the Seahawks Out of the Sky 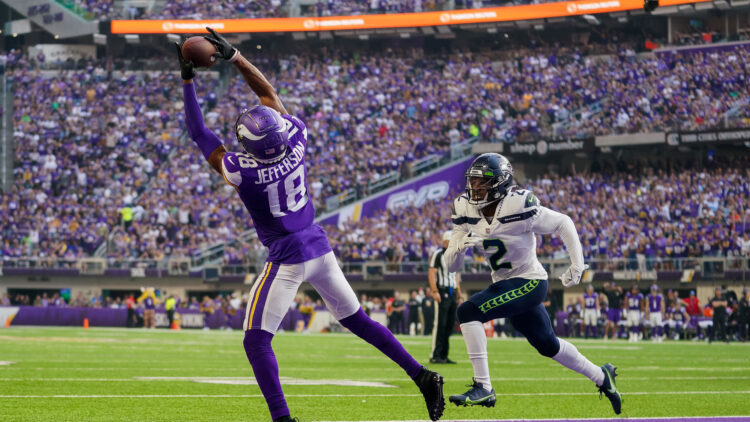 The Seattle Seahawks started the game Sunday on fire, slicing their way upfield with surgical precision for an easy touchdown. The Vikings would quickly answer with one of their own. Seattle would run off ten unanswered points on two long drives, while the Vikings meekly responded with a three and out between them. Those ten unanswered points would open the door for our dear old friend — oh, hey dread, welcome back.

Dammit, this team is supposed to be different this year, and they have been. Knowing it needed a touchdown to answer Seattle, Minnesota methodically marched its way downfield and got one. Huh, weird. Seattle responded with a six-play, 53-yard drive, setting up Jason Myers for a 44-yard field goal. The kick went up, and he… missed it? Uhh, that doesn’t happen against the Vikings.

Kicking EPA/play ('17-'21), which can account for expected kick conversion rate by distance (some small noise from teams going for it).

Vikings ball with 3:14 left on the clock at the Minnesota 34 yard line. Three plays later, it was first down at their 45-yard line at the two-minute warning. Three plays and two first downs later, Alexander Mattison ran to the right on 2nd & 6 at the Seattle 39 yard line. Two-yard gain, first charged timeout Seattle with 57 seconds left. Cousins would convert the first-down coming out of the time out, setting up a first down at the Seattle 30 yard line with the clock ticking. Working out of no-huddle, Cousins attempted a pass to Justin Jefferson, which fell incomplete (gotta catch those JJ!).

With 2nd & 10 and 34 seconds remaining, the Vikings did something we are accustomed to seeing. A handoff was attempted between Cousins and Ameer Abdullah. Cousins pulled the ball back after seeing the play reaction and tried to run to the left side of the field. However, Jamal Adams came flying up and forced Cousins out of bounds for a 2 yard gain — a blessing in disguise. We’ll get to the significance of this play later.

The following two plays were chunk plays for first downs. The first to Jefferson and the next to Tyler Conklin, both in the middle of the field, proceeded by Viking timeouts. The drive was capped by Cousins finding Jefferson in man coverage for paydirt. Jefferson atoned for his earlier drop by selling a drag route to his coverage, stopping abruptly, and breaking back towards the sideline. 21-17 Vikings, 17 seconds left in the half, Vikings ball coming out of halftime.

In the Week 2 loss to the Cardinals, the Vikings’ playcalling at the end of each half was questioned by folks after the game. In both halves, there was ample time to attempt additional plays and increase the point total on the scoreboard. At the end of the first half, the Vikings ran the ball twice with under a minute to go. After the second run, they were forced to use their last time out. Unable to use the entire field for fear of running out of time, and after unsuccessfully being able to secure a first down, the Vikings settled for a field goal despite successfully moving the ball on the drive. Here it was in a tweet versus Arizona:

The Vikings let more than 30 seconds run off the clock before using their final timeout and attempting that field goal. I know it's hindsight and your kicker should make a 37-yarder, but why not try to get closer — or score a TD?

The same scenario unfolded at the end of that game. After a pass to KJ Osborn to the Arizona 19 yard line, the Vikings let the clock run down to 4 seconds before calling their final time out. The rest is history — missed opportunities.

The coaching staff must have seen the backlash such playcalling brought. They definitely responded. In a game, much like the Week 2 contest, where points would be needed — they went for the kill shot. It worked, and it was a large reason the Vikings won the game. They came out of the half and string together a long, methodical drive and added points. The growth of the coaching staff, along with the players, will be vital to sustained season success. It certainly looks like they are well on their way.