Justin Jefferson Was Robbed for OROY. Here’s Why. 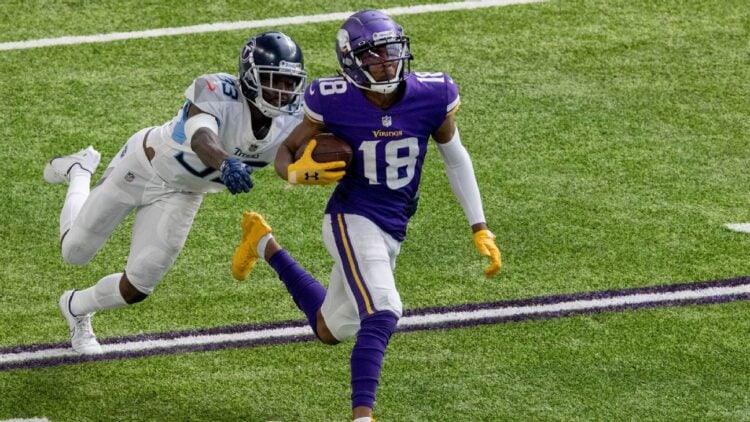 Minnesota Vikings wide receiver Justin Jefferson won the Sporting News Rookie of the Year award for the 2020 season. That honor was the first of “ROY Award Season” as there are four separate prizes to commemorate rookie performance – and six if you break them out by offensive and defensive positioning.

For starters, that is too many awards. The NFL should probably nominate one as the gold standard (likely Associated Press) and leave the other three for crackerjack-box trivia stuff. Can you imagine the NBA handing out four MVP trophies? No, it would muddle the legitimacy of the award.

Justin Herbert won the bulk of the rookie awards and took home the Associated Press Offensive Rookie of the Year edition on Saturday. The Los Angeles Chargers quarterback had a magnificent rookie campaign after would-be starter Tyrod Taylor suffered a punctured lung accidentally perpetrated out by his trainer. Herbert tabulated the most passing touchdowns ever by a rookie, most completions, and the sixth-best rookie passer rating of all-time.

Jefferson notched 1,400 receiving yards – the most by a rookie in NFL history.

But voters were enamored with quarterback lust as Jefferson garnished a meager nine votes for OROY to Herbert’s 41. This wasn’t even close. And that is a travesty.

Until we reduce this “quarterback wins” culture that has stormed professional football, the game will continue to stuff individual awards onto quarterbacks’ resumes.

This is extremely straightforward – Justin Jefferson was a better, more productive wide receiver in 2020 than Justin Herbert was a quarterback.

Per Pro Football Focus, Herbert’s 2020 grade was 80.1, and that ranked as 15th-best among all quarterbacks in the NFL. He was four spots below Vikings signal-caller, Kirk Cousins (83.5). In terms of company, PFF places Herbert in a grade category among Philip Rivers and Matthew Stafford. Those men are astute quarterbacks, but few assert that they were upper-echelon in 2020.

Justin Jefferson was the NFL’s No. 2-ranked wide receiver via PFF (90.4) behind Green Bay Packers wideout Davante Adams. With 1,400 receiving yards, he was the league’s third-most prolific wideout. Herbert tossed his way to the sixth-most passing yards.

Again, both men played tremendously. But Jefferson joined a tier of wide receivers that Herbert failed to reach at quarterback as a rookie. Had Hebert rivaled Patrick Mahomes and Aaron Rodgers’ numbers during 2020, then this award should sit on his fireplace mantel. He did not do that.

As a wide receiver, Jefferson did precisely that.

Much of the fawning over Herbert was derived from his toppling of the two-season-old passing touchdowns record. Baker Mayfield previously held the record from his 2018 rookie campaign. The record, although impressive, is made to be broken on a significantly more-routine basis as the NFL has tightened rules around quarterbacks. They cannot be aggressively touched. If a movement near a quarterback’s body looks violent or suspect, penalty flags litter the turf. The league has gone pass-happy – irrefutably. Of course, passing records will fall with prevalence as a result.

When Jefferson set his rookie record, it was a mark formerly set back in 2003. The Iraq War was just beginning. That’s how old that one was. Mayfield last set the passing touchdown record in the same timeframe that Supreme Court Justice Brett Kavanaugh was being confirmed to the bench. Does that feel like long ago? No, it doesn’t.

If the OROY selection was about “who’s better at his position,” Jefferson was the winner as determined by 2020 performance. Had the award evaluated “which record is more difficult to break,” the answer is the receiving yards record. Perhaps the voters care about Pro Football Focus grading? It’s Jefferson with that metric, too. Who did the Associated Press select as All-Pro? Jefferson, not Hebert.

The recent history of the OROY was actually friendly to non-QBs. Saquon Barkley, Alvin Kamara, Todd Gurley, Odell Beckham, and Eddie Lacy all won the Associated Press version since 2013.

This season, though, the narrative shifted to embody the quarterback fetish. In this regard, the voting is undergoing MVP-like tendencies. No non-quarterback player since Adrian Peterson – eight years ago – has won the NFL MVP award. MVP conversation season jumps off the calendar and the who’s-who of football crank his/her neck to begin looking for the best quarterback. Little attention, if any, is ever paid to the defensive side of the football. You know those guys – the ones that comprise half of the football team. Defensive players be damned – the NFL does not acknowledge non-quarterbacks for the MVP award either.

The ROY prize really felt like one that was objective and still adjudicated all positions on the field. Now, however, it is following the “QB Wins” pipeline of analysis – one that affords way too much credit to one man in a sport of 53 men per team.