Is it Time for Wyatt Davis? 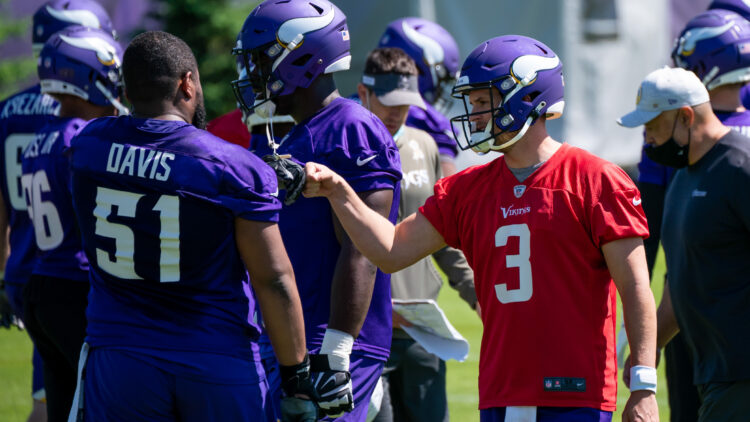 Is it time for Wyatt Davis to start?

No, not at center. A handful of third-string reps in camp does not make an NFL center. Moving tackles to guard is bad enough, but you really can’t just shoehorn someone in at center. I’m talking about right guard, the position he played at college for Ohio State and was seemingly drafted for. There was quite some time where Davis was pegged as a possible first-round selection in this year’s draft. A knee injury saw him play his last five college games hurt. It saw him on crutches at the end of the national championship game, and his draft stock fell.

The Vikings were able to pick him up in the third round with the 86th overall pick. Franchises spooked by the injury can be the only explanation. Assuming a clean bill of health, I was excited to see what he would bring to the offensive line with fellow first-round rookie tackle Christian Darrisaw. Injuries and Mike Zimmer’s reluctance to start rookies means we’ve only just got to see Christian Darrisaw. How long until we see Wyatt Davis?

Instead of starting a rookie at right guard, the Vikings went with the option of moving third-year tackle Oli Udoh inside to guard — a very “Mike Zimmer” move. I’m not a fan of moving linemen around. I’m not convinced Ezra Cleveland is a long-term solution at left guard, but he is more established than Udoh. Like the rest of the offensive line, it wasn’t a good start to the season in Cincinnati, with Udoh responsible for two of the numerous penalties called on the Vikings.

This was followed by promising performances against the Cardinals and Seahawks, leading to optimism that he could actually be a good guard. Then the Browns defense came to town, and it’s all gone horribly wrong. That chastening experience was followed up by poor displays against the Lions and Panthers. To start the season, Udoh was one of the highest-graded Vikings players via Pro Football Focus. Grades of 41.1 and 40.3 in the last two weeks have seen his grade drop down to 55.9. The lowest grade for a starter on offense.

The following two lowest grades are fellow guard Ezra Cleveland (57.3) and center Garrett Bradbury (56.0). The interior of the Vikings offensive line is still a problem. They’ve had some reasonable outings this season, but when a genuinely good defense comes to play, things still look bad.

Time for a Change?

Oli Udoh’s struggles against Carolina we’re compounded by a total of five penalty calls, a number that is unacceptable for a starting guard. He currently has the second-most penalties among guards in the league.

Much the same as Rashod Hill was, I feel Udoh is just a short-term fix, who, like we’ve seen the past couple of weeks, will start to look worse the more he plays rather than improve. The interior of the Vikings offensive line has been better than last season, allowing for two sacks through the first six games, compared to nine last season. Don’t let that fool you into thinking they are good, though. When the Chicago Bears come to play later in the season, I don’t believe that the interior will fare any better than its recent predecessors. That is the acid test.

Wyatt Davis has the potential to be a very good starting guard. There are no guarantees, but we will never know until he’s given a chance. Davis comes with a good college pedigree from his time with the Ohio State Buckeyes, with accolades including two times all-big ten, consensus All-American, unanimous All-American, and the Rimington-Pace offensive lineman of the year in 2020.

Is it time for Wyatt Davis to start? I wouldn’t be averse to seeing Davis take up the starting role coming out of the bye against Dallas. I don’t think that will happen, but one more abysmal outing from Oli Udoh and something needs to change.