How the Return of Everson Griffen Affects the 2021 Vikings 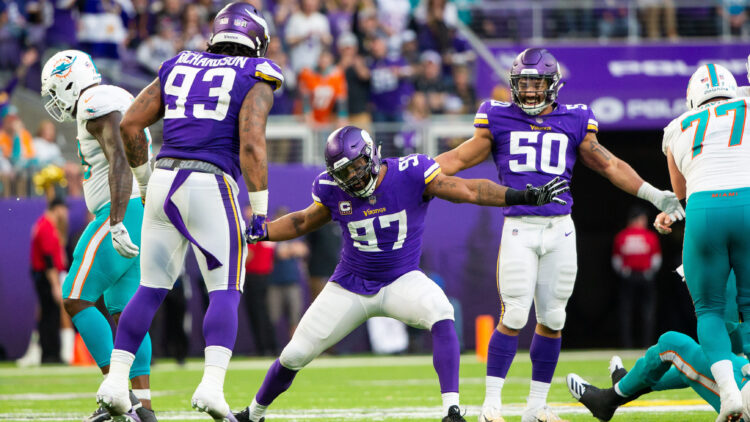 The hopscotch of Everson Griffen playing for the Minnesota Vikings in 2021 is finally over.

It’s been a saga.

First, Griffen signaled his desire to play for the Vikings again — back in January. Then, he tweeted insulting statements about quarterback Kirk Cousins and the franchise on the whole. He implied head coach Mike Zimmer never wanted Kirk Cousins on the team from the onset. Yikes.

The Griffen reunion chatter died down, mainly because the Vikings signed Stephen Weatherly — another reunion story — and drafted rookies Patrick Jones II and Janarius Robinson. But something wasn’t quite right as general manager Rick Spielman passed on the candidacies of pass rushers like Justin Houston and Melvin Ingram during the summer. And Spielman had plenty of money to splurge for either man. Yet he didn’t.

A little over a week ago, nostalgic Vikings fans got their wish when Griffen indeed re-signed with the Vikings. After that, he hit the field against the Kansas City Chiefs in the final preseason game of 2021 — and looked absolutely fantastic. He forced a few quarterback pressures in limited action. All was well. Griffen, before too long, would climb the depth chart, seizing the RDE job that he held uncontested for six seasons under Zimmer (or so went the theory).

But then the Vikings released him in shock transaction last Tuesday.

It turned out the move was “procedural,” as Griffen was re-signed — again — one day later.

So, here we are. Griffen will play for Minnesota in 2021 with eyes on his old RDE gig. That impacts a lot of stuff — and many teammates.

Foremost, if Griffen plays like he did against the Chiefs inside the regular season, it would be foolhardy not to allot him 60%-75% of all defensive snaps. Maybe — he’s just still that damn good. A heavy-on-the-Griffen platter in 2021 would signify his career decline it is not quite ready for fruition. Ergo, for the man himself, his output in 2021 will define his career next steps.

With a productive Griffen or even an average edition, Stephen Weatherly’s stock crumbles. He was the first free agent signed by the Vikings in the offseason, and he thought he would start opposite Danielle Hunter. Now, however, D.J. Wonnum has clawed up the depth chart, challenging Weatherly for the RDE1 spot — a battle Wonnum is likely to win when the official first depth chart hits the wire. Weatherly is a decent pass rusher, the hand-in-the-grass style like Griffen. But Wonnum is versatile. Minnesota experimented with him in 3-4 roles this summer, standing Wonnum up as a linebacker. And it worked. In a scrimmage at U.S. Bank Stadium, he ripped off a pass from then-QB2 Jake Browning — that doesn’t feel like a big deal now — taking the interception back for six points on that Saturday night. At the time, it was impactful.

On the other hand, it is not a forgone conclusion that Wonnum’s summer accolades directly translate to regular season success. Then what?

It is a matter of fact that Griffen will stalk quarterbacks and create sacks — it’s what he does. The Vikings hope Wonnum replicates the Grffienesque trait. If Wonnum is mediocre, Griffen has a resume stating he is better.

Lastly, as Griffen is assured to hog some pass-rushing snaps — the forecast for Patrick Jones II dips. Jones now lives in a crowded house for pass rushers. When he was drafted in April, it was reasonable to assume he might surpass Wonnum or Weatherly for playing time. He’s a 3rd-Round talent, and those dudes are expected to contribute.

For better or worse — depending on your perspective — Griffen will get his attention in Zimmer’s defense. Zimmer knows and trusts Griffen’s body of work. The rest of the field is either decent or too young to stave off a tyrannical Griffen pass-rush history.

Think of it this way: If, for some bizarre reason, the Vikings traded for Xavier Rhodes tomorrow (just an example, not a rumor), imagine the juxtaposition on playing time it would entail for Patrick Peterson, Bashaud Breeland, Mackensie Alexander, and Cameron Dantzler. For the sake of the example, pretend the [good] 2020 Indianapolis Colts version of Rhodes returned to Minnesota. Roles would change.

Role re-definition for the Vikings 2021 pass rushers is underway due to Griffen’s arrival.