How Adrian Peterson Can Break the NFL’s Rushing Record 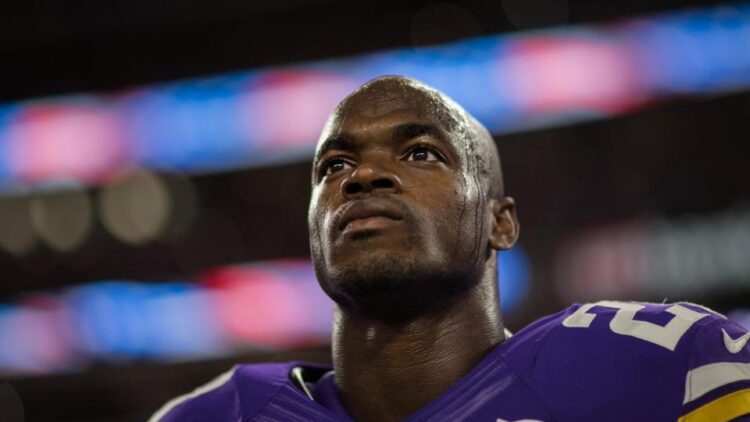 Adrian Peterson contributed nine seasons of on-the-field heroism to the Minnesota Vikings franchise. This spanned from 2007 to 2016, and the soon-to-be 36-year old was the undisputed identity of the organization. If he retired after 2016 – at an age of 31 as many running backs do – he likely would have earned a Hall of Fame call on the merits of his Vikings accolades alone.

But he decided to be an NFC lifer. Since departing Minnesota, Peterson joined the New Orleans Saints, Arizona Cardinals, Washington Football Team, and Detroit Lions. Regrettably, none of those destinations netted Peterson any playoff appearances – which he claims to covet along the way to his ultimate goal of hoisting a Lombardi trophy.

He will not get that from franchises like Arizona, Washington, or Detroit (well, the teams were not good while he was there). Now, Peterson is becoming a bit more vocal about the possibility of joining a non-bottom-feeding team like the Tampa Bay Buccaneers. True-blue ring-chasing.

And who can fault him? Only four total playoff games have crossed his agenda in 14 seasons. He is the fifth-leading rusher in NFL history via yards behind Emmitt Smith, Walter Payton, Frank Gore, and Barry Sanders. Interestingly, Peterson is about a half-season away from bumping off Sanders for fourth-most rushing yards of all-time.

The University of Oklahoma alumnus also wants to shatter Emmitt Smith’s longstanding rushing-yards record. This would mandate that Peterson play for several seasons. Will he do it? Probably not. Is it possible? Yes – here’s how.

It is unlikely that an NFL franchise will nominate Peterson for RB1 services. He can still handle the workload – especially if you ask him personally – but his career has pivoted to that of a bonafide RB2 or RB3. Too, Peterson has accrued attention from going-nowhere teams since mid-2017. If he desires to win a Super Bowl and topple Emmitt Smith, well, things get murky. A general manager of a Super Bowl-contending team would be required to uplift Peterson to RB1 status. That feels like a longshot – but again – not impossible.

Peterson tallied 604 rushing yards in 2020 with Detroit. Unless a team [oddly] taps Peterson for full-time, RB1 duties, this should be considered his ceiling, to a degree.

Mathematically – at the 604-yards-per-season pace – he needs six full, injury-free seasons to surpass Smith. The year would be 2026 and likely the tail end of that season. Any dips in his performance – which are extremely prevalent for an aging halfback – extend the duration of this estimation. Conversely, Peterson could catch fire and break off over 1,000 rushing yards as he did in Washington during 2018. But that is strictly theoretical.

The takeaway: Peterson must play for six full seasons and rush for about 600 yards per year. He’d break the all-time mark at age 41.

This one is arguably the most vital. He must remain healthy.

To Peterson’s credit, he has been mostly healthy since leaving the Vikings. His ACL tore in 2011, but he prosecuted an unholy recovery to win an MVP the following season – the last instance of a non-quarterback winning the award. In 2014, he missed 15 games for off-the-field disciplinary matters. And in 2016, he was hurt for the majority of his Minnesota swan-song season.

His objective in passing Smith stipulates attention from offensive coordinators – and health on his accord. The record will remain Smith’s if either of these elements fall by the wayside. Unfortunately for Peterson, a player’s health – particular for a tailback – trends southward as the calendar flips pages.

Peterson’s three-year span of good health since 2018 is a necessity for his all-time rushing record goal.

Finally – the place where the rubber hits the road. Peterson is tasked with convincing a general manager or coach – or a litany of them – that he is indeed a cyborg. Frank Gore is the only recent example of a player that emulates the Energizer Bunny. Peterson must follow suit — and then some. Remember, too, we think Gore is old now at age 37. Peterson must stretch this four more years.

Each season, his performance must generate relevance. His playmaking is the barometer by which NFL executives will determine if he’s worthwhile. Peterson scored seven touchdowns in 2020 with the lowly Lions, so big moments akin to that bode well. And they must continue.

Achieving the best-of-all-time designation is predominantly a matter of carries. Should his body hold up in the pass-happy NFL, yes, Peterson can dethrone Smith. It’s just virtually unprecedented that a running back plays into his 40s.

Who are we kidding? The play-until-40 plan is unprecedented. The only running back to get close was Tony Richardson with the New York Jets in 2010. He was 39 – and he played fullback.