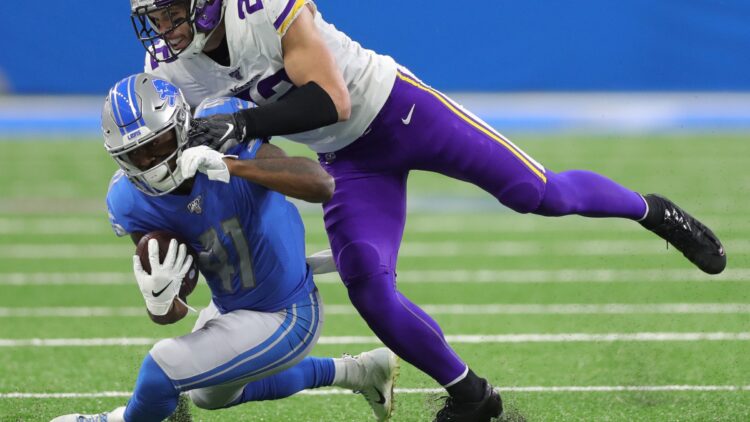 Note: This article originally appeared on our nationally-themed site, FranchiseTagged.com.

Many players become underappreciated by NFL fans across the league during their careers. Whether it’s because they have a quiet personality or play for a small-market team, their greatness doesn’t get noticed by the majority of fans or the media. The best case of this is none other than Minnesota Vikings safety Harrison Smith. Smith has been one of the best safeties in the league for most of his career now, yet continues to be overlooked by national media and fans of other teams. While he is 32 years old now, he is still playing at an extremely high level and is still one of the top safeties in the game. We can look at the stats and see how he racks up against the other top safeties in the league. Through this, we will also see how his versatility is still unmatched by any current player.

There is a narrative out there that Smith declined in 2020, and while he may have had some drop-off, he still ended up as one of the best safeties in the league. Five safeties last season were voted as first or second-team All-Pro, and Smith didn’t make the team. Let’s look at how his stats compare to all of the other safeties that did make an All-Pro team. (Stats from Pro-Football-Reference).

Smith was in the top three for nine of the thirteen statistics listed. He was good in defending the run, he was good in defending the pass, and he was good at pressuring the quarterback. Despite supposedly having a down year, Smith was still one of the best safeties in the league and deserved to have similar All-Pro votes to some of these other players. He is arguably still the most versatile safety out there, and he did this in a 2020 season where he had to make up for a horrible defense around him. However, it wasn’t just this season where Smith has been overlooked by the national media. This has been a trend throughout his entire career.

Four safeties got selected for the 2010’s All-Decade team, and there is a good argument that Harrison Smith got snubbed from this list. The players on this list are great in their own right, but Smith stacks up very well against them.

Once again, he is all over the stats sheet and was top three in all but one category. He ranked first in four of the nine categories, which shows just how great Smith was during this decade. Other than Mathieu, everyone got drafted before Smith. The one thing missing, however, was All-Pro nods. Smith is the only player on the list without multiple first-team All-Pro nominations, which is criminal if you look at his body of work in the league. Smith was, however, the only safety who made every single pro bowl between 2015 and 19.

Just on stats alone, Smith is right up there among the hall of fame safeties. Before the 2019 season, Smith had 99 career games. This was how he stacked up against other notable recent safeties through their first 100 career games.

.@HarriSmith22 is set to play in his 100th career game this Sunday vs. Atlanta.

A look at how Smith ranks among other notable safeties at the point of their 100th career game (stats via @pfref): #NorseNotes #ATLvsMIN pic.twitter.com/9Szuq96qgb

For a list with a couple of Hall of Famers and other great safeties of the last few decades, Smith was among the top in every statistic. Over the last two seasons, this hasn’t changed one bit. Compared directly to Troy Polamalu, a Hall of Famer, you can see just how great Smith has been.

Thru first 130 games of career–

Yet Smith likely won’t even sniff a Hall of Fame berth. By having an under-the-radar career, Smith hasn’t gotten the attention many of these other players have had. This gets showcased by his All-Pro nominations, as well as being left off the All-Decade team, which was created by Hall of Fame voters. If Smith keeps up the pace he’s been on, he deserves to be in the conversation as one of the best safeties of this era.

Harrison Smith has been underappreciated his entire career by national media, despite being one of the best safeties in the league year in and year out. His ability to do anything he’s asked to do has allowed Mike Zimmer to put out many great defenses. Smith does, however, have the respect from his peers that he deserves. Before the Vikings faced the Patriots in 2018, Bill Belichick himself compared Smith to other Hall of Fame players. After signing with the Vikings this offseason, safety Xavier Woods mentioned Smith as one reason he picked the Vikings. Smith has also landed on the last five NFL top 100 lists, voted on by NFL players. Even if he won’t get national appreciation, Smith is on track to end up on the Vikings’ Ring of Honor. Finally, here is a Twitter thread by Nick Olson that shows off Smith’s versatility.

oh nothing, just harrison smith beating two blocks to tackle Danny Woodhead for a loss with one hand pic.twitter.com/Ea6SD7m6R8