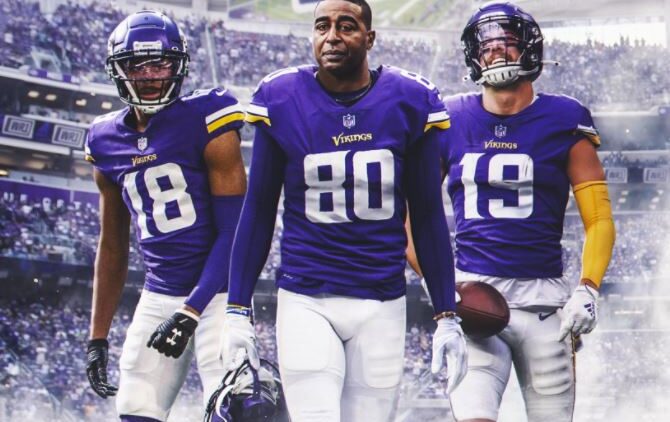 And that’s all it took for Carter to have a little fun with it. From his Twitter account, Carter tweeted this:

It can’t really be denied – that looks pretty sweet.

While the short-term goal of the photoshop tweet was to drum up nostalgia, the long-game objective for Carter is to draw folks into his podcast called WR1. Because he’s Cris Carter, the ex-Vikings wideout grabbed Thielen and Jefferson from the photo for his latest episode.

That can be listened to here.

Carter spent 12 seasons with the Vikings, earning eight Pro Bowls during the timeframe and two First-Team All-Pro honors. He broke out for Minnesota in 1992, increasing his production steadily by the year. Then, Randy Moss was drafted in 1998 and paired with a 33-year-old Carter, who was still performing at a tremendously high level. Jake Reed was on the team, too, and the three formulated “Three Deep,” a trio of NFL WRs considered Top 20 talents in the league at the time. This was the bunch that propelled the Vikings to the 1998 NFC Championship, along with the experienced arm of Randall Cunningham and robust production from tailback Robert Smith.

The photoshop was assuredly a tease, but there was a patch of years for Minnesota when welcoming Carter back in his 50s wasn’t insane. Before the emergence of K.J. Osborn in 2021, the Vikings notoriously could not discover a tried-and-true WR3. Early in 2021, Osborn changed that narrative a bit.

Carter’s podcast began in August and airs weekly, usually with a big-name wide receiver as his guest.

Most of the World Believes Vikings Will Lose in Carolina