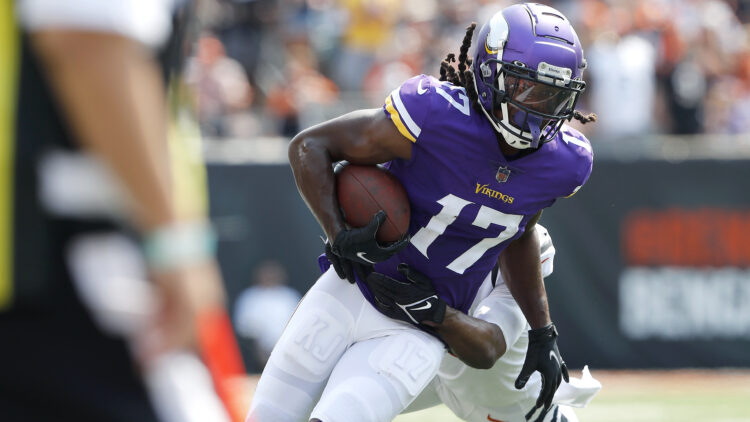 Did you know the Vikings would waltz out of Week 1 at Cincinnati with a trustworthy kicker and a bonafide WR3 — all while losing a game to the Bengals?

That’s the paradox of the NFL on full display as early as Week 1. The Vikings effectuated deadly miscues throughout its 2021 maiden-voyage contest but did draw some silver linings from the matchup.

In the 27-24 loss to Cincinnati, a kicker emerged. Greg Joseph nailed a game-tying 53-yard field goal as regulation expired, sending the rollercoaster game into overtime. On the whole, Minnesotans did not expect Joseph to connect – he missed everything longer than 50 yards during the preseason – but he did this time when it mattered. And the distance was impressive. For at least one week, the typical kicker anxieties by Vikings fans are relaxed.

Then, K.J. Osborn, a second-year wideout from the University of Miami, made the best of his first offensive opportunity. Osborn nabbed seven receptions for 76 yards and a crucial third-down conversion at Cincinnati. Most onlookers to the box score would opine something like, “The WR3 had 76 yards. Who cares?”

The spirit of that question is valid. The statline is not divine. But for the Vikings, that production is pretty damn godly.

Since the departure of Jarius Wright from the franchise after the 2017 season, Minnesota has not nominated a consistent WR3 for duty. First, it was the yearning for Laquon Treadwell to produce. He didn’t. After him, the hodgepodge consisted of Bisi Johnson and Chad Beebe auditioning for the gig. Neither panned out like a real WR3.

So, the Vikings settled for lackluster WR3 performance amid the last three years, instead passing the ball to Dalvin Cook and a second tight end. That’s not normal. Most NFL teams have a WR3 who can accumulate chunk yards, move the sticks, and score a few touchdowns.

Versus Cincinnati, Minnesota was more normal in getting three wide receivers the football. Yes, that was likely aided by the absence of Irv Smith Jr., who will not play in 2021 because of a meniscus tear.

More importantly, Osborn did not feel like a makeshift solution. He was a playmaking personality in charge of more than catching the football and falling to the ground. Osborn was the centerpiece of trickery (the Justin Jefferson pass), and he spurted to a first down on the aforementioned clutch third-down play. Quarterback Kirk Cousins evidently trusted the former Hurricane – he targeted him nine times, the same number allotted to Jefferson.

Here’s a stat which a) portrays the grim production behind Adam Thielen, Stefon Diggs, and Jefferson in the last six years b) illustrates Osborn’s rapid contribution to the offense:

Most Receiving Yards by WR,
Not Named Diggs, Thielen, Jefferson,
Vikings in a Single Game,
Since 2015:

Osborn has a reasonable chance to deconstruct – or at least diversify – the Vikings top-heaviness in the wide receiver room. The national perception of the Vikings receiving corps right now is, “Jefferson, Thielen, and nobodies.” Osborn wasn’t a nobody yesterday – he showed up in vital spots.

And kudos to the young pass-catcher. Quite frankly, Minnesota used Osborn to the tune of absolute nothingness during the pandemic season. He allegedly was not ready. Instead, he bungled a few punt returns. That’s what his reputation entailed after Year One – a punt fumbler whose name would surface in 2021 for roster cut day.

Suddenly, he’s the Vikings WR3 by a longshot. His tale is a testament to hard work, the change an offseason can bring, and the avoidance of writing off rookies after a single year. Not everybody is Justin Jefferson or Justin Herbert right away.

Now, Osborn has to prove the acceptance of the WR3 job offer was more than a one-game outlier. And he’ll get that chance on Sunday in Arizona.