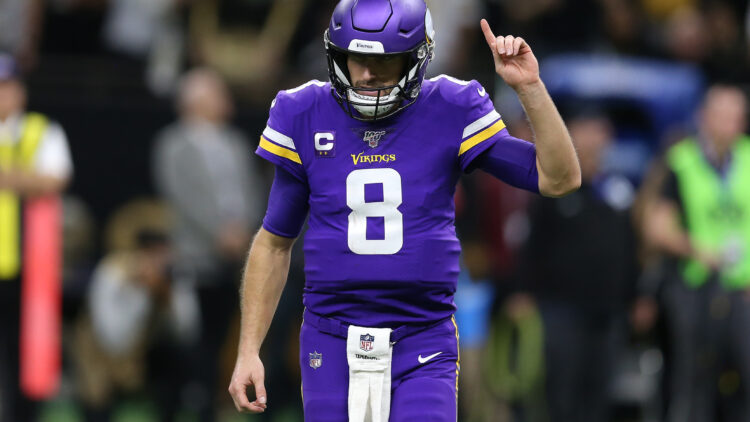 After three weeks of play, Minnesota Vikings quarterback Kirk Cousins has shown to the NFL world just why he belongs in the conversation of top quarterbacks in the league right now. Cousins has looked as sharp as ever through twelve quarters and has played some of the best football of his career. After seeing the pace that he is currently on, I wanted to take a minute to explore the Vikings Single-Season Quarterback Leaderboards and see where Kirk could find himself at the end of the season if he keeps up this fantastic pace.

Daunte Culpepper’s MVP 2004 season currently sits atop the Vikings Single-Season Passing Yardage Leaderboards with 4,717 total passing yards for an average of 294.813 yards per game. Cousins only needs to average 277.529 yards over 17 games this season to pass the season total 4,717 that Culpepper set, but would still be behind him in yards per game at that total. However, if Kirk can keep up his current red-hot pace of 306 yards per game, he will end the season with an astounding 5,202 yards passing, easily eclipsing both Daunte’s season total and his per-game mark.

As with Passing Yards, the top spot on the Passing Touchdown Leaderboard also belongs to Daunte Culpepper. In his 2004 MVP campaign, Culpepper threw 39 Touchdowns, 13 of which went to Randy Moss. Culpepper’s total of 39 Passing Touchdowns was good for an average of 2.437 per game throughout the 16-game season. Kirk Cousins is currently averaging 2.667 touchdowns per game this season, which would bring his season total to 45, easily passing both Daunte’s 2004 season total and per-game highs. Cousins would need to end the season with 40 touchdowns to set the new single-season mark or 42 to break the current per-game record.

Interception percentage is a stat that shows what percentage of a quarterback’s passing attempts resulted in an interception. Anything under 5% is typically acceptable, with ball-protecting greats like Drew Brees averaging only 2.303% over his career. The NFL Record is an absurd 0.335% from Aaron Rodgers’ 2018 season, with the Vikings Single-Season Leader being Sam Bradford’s 2015 20 touchdown/5 interception season that saw him throw an interception on only 0.906% of his passes. Since he has yet to throw an interception through three games this season, Kirk is obviously on pace to break this. If he continues to throw the ball at his current rate, he could throw five interceptions this season and still take over the top spot on the franchise leaderboard. In order to top the NFL record set by Aaron Rodgers, Cousins would need to throw two or fewer interceptions throughout the season.