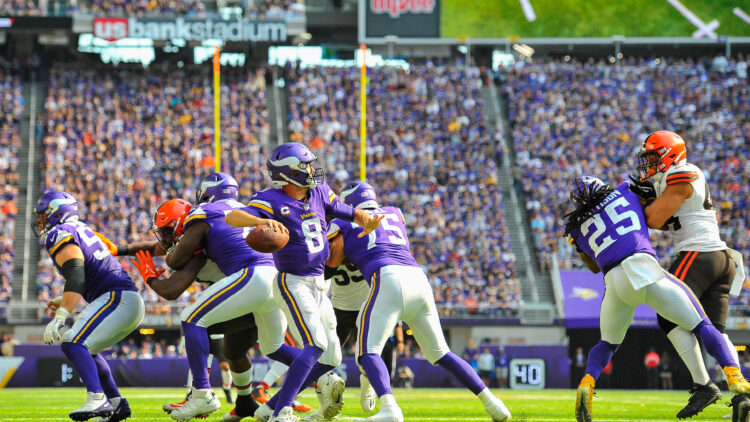 The Minnesota Vikings are now owners of some weird stats due to their topsy-turvy start to 2021.

The Minnesota Vikings are the first team in NFL history to have a losing record thru 4 games while cumulatively outscoring opponents (+2) and committing 2 or less turnovers.

Somehow, they’re cumulatively outscoring opponents – and finding ways to lose. Vikingesque, indeed. This does indicate, though, there’s a good football team in there somewhere.

14 times in Vikings history QBs have started a season with 7+ TD passes thru 4 games.

Kirk Cousins is the only one to exit Week 4 while his team had a losing record.

These outlier stats occur for a reason. All facets of the team are not firing simultaneously. Turnovers are low, Cousins was awesome in three games, and still, the team has a 1-3 record. It’s madness.

In three out of four games, when Cousins had a respectable amount of time to throw the ball, he was phenomenal. Vikings fans have a tough time recognizing it because of the pervasive losing record. But based on the totality of Cousins’ performance through four games, the Vikings should own at least a 2-2 record – probably 3-1.

No bones, though. Not this time, not this year.

Nationally, some folks and entities get it. Even including Cousins’ meh production in Week 4 against the Browns, ESPN identified Cousins as the player with the hottest start to 2021, according to unnamed NFL executives. They get it. Vikings fans are just so peeved in the immediacy of the Browns loss – that it’s tricky to cast Cousins in a favorable light this week. Yet, nonbiased executives don’t have that problem. ESPN’s Jeremy Fowler wrote on the Cousins pick for hottest start:

“Cousins does certain things so well that a player often labeled overrated feels a bit underrated. He has seen a hot start because he starts so hot, completing 16 of 17 passes for 223 yards and three touchdowns on opening drives this season. He showed once again on Sunday against Cleveland that he is great on a script, completing all six passing attempts for 59 yards and a score to open the game. We already knew he’s great in a clean pocket, with Pro Football Focus ranking him first when not pressured with a 94.1 grade through three weeks. And it’s hard to argue with his bottom-line production through the first month: 1,121 yards with nine touchdowns and one interception on 108-of-157 passing (68.7%).”

The dealmaker and dealbreaker on Cousins is straightforward: He must have time to throw.

It’s elementary. When Cousins’ offensive line protects him, he’s deadly. When they do not, he ain’t. The difference for him is the stark dropoff between the categories. He can play like Dan Marino with a clean pocket; he can fold like a banquet chair with a dirty pocket. Once the beholder realizes this about the Michigan State alumnus, he’s easier to comprehend.

To a degree, other quarterbacks – like Russell Wilson, Patrick Mahomes, or Josh Allen – can make more out of a sullied pocket. Cousins, for the most part, does not. This is what separates him from an elite tier of classification.

Unsurprisingly, Cousins played well in the first three weeks of 2021 – because his offensive trenches afforded him time to throw. Against Cleveland, they did not, and Cousins looked pedestrian.

Therefore, the Vikings offense must find a way to protect their expensive asset. Otherwise, the Cousins Experiment is doomed. He will not drag a team to the Promised Land with trashy protection. Most don’t. Mahomes from the morning after the Super Bowl would like a word.

Give Cousins time, and the hot start highlighted by ESPN can continue.