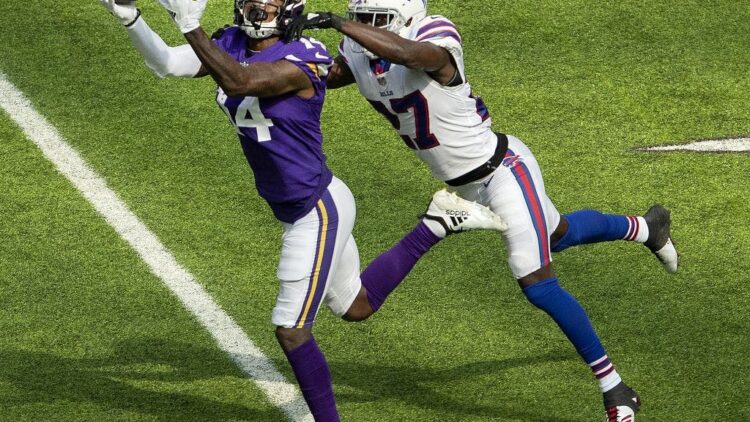 I always find a way to talk about former Minnesota Vikings wide received Stefon Diggs at least once a week. That may be me showing my hand as, yes, I am still “butthurt” that my former favorite player forced his way out of Minnesota. Outside of that, though, he tends to be the focal point of Vikings media once per week organically, so the idea that I’m obsessed or brooding may be only partially true.

This time, though, it’s good news as The Star Tribune’s Ben Goessling interviewed Stefon Diggs back during better times in 2018, where he mentioned new Minnesota Vikings wide receivers coach Keenan McCardell (who coached Diggs at Maryland):

“Aside from Coach Hazell and Coach Stew [former Vikings WR coach George Stewart] and people like that I’ve had in the NFL, Coach McCardell was the best coach I’ve ever had, because he taught me how to play receiver. He taught me the smallest details on running routes. He taught me suddenness, he taught me breaks. He didn’t teach me how to catch; he said, ‘We’re going to work on getting you open and creating separation,’ because everybody wants separation. I don’t care you are, I don’t care what quarterback you are, I don’t care what level you’re at, everybody wants to see separation. He taught me how to get open, essentially, and that’s why I hold him to such a high standard. He saw me as a raw talent: I can run, I’ve got good speed, I’m quick, but let’s tailor that into something that will take you farther.

I owe breaking to him. There’s no point in having a Lamborghini if you don’t have brakes. I’m not saying I’m that fast, but he’s saying, ‘If you can’t stop, it don’t matter.’  It just takes you to the next step if you can use your speed as deception, or you can use your acceleration — which he was huge on — and make a guy think you’re running fast, but you’re really just running fast to make yourself stop. Me, when I hit the accelerator, I’m trying to break down. I’m not only trying to run by you, but 9 times out of 10, I’m trying to give you a false illusion. I want to run by you, but I’m really just trying to stop. [Before McCardell], I was just running around, not really running with a purpose — stopping just how I knew how to stop. Now I just have a way of doing things a lot more technically.”

This is a great hire for the Vikings, who have one of the best wide receivers (period) in the league in Justin Jefferson. Jefferson ranked as the second-best receiver in the NFL according to Pro Football focus, so imagine what he (and the Vikings) could do with a little fine tuning?

The sky is the limit for the Jet and thus the Vikings.
Thanks