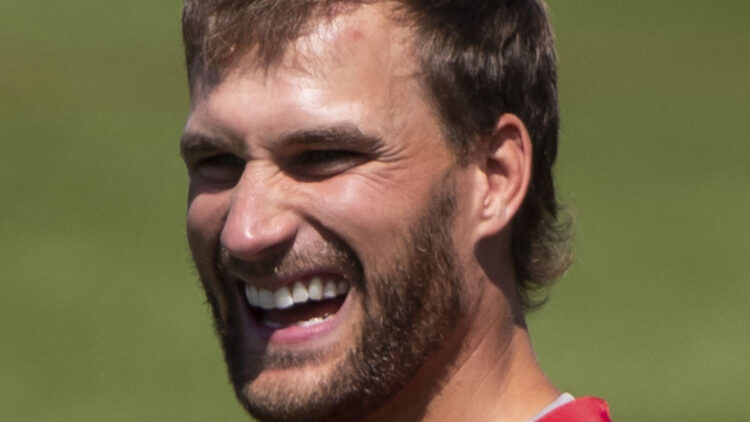 The 2021 NFL regular season is about two weeks away, so this is primetime for team predictions, Super Bowl prognostications, and player rankings.

Because quarterbacks are the undeniable leaders of NFL teams – they’re even assigned “win-loss” records like tennis players – individual player rankings normally start with them.

Cousins snagging a 14th-in-NFL rankings isn’t criminal. Some folks cannot escape the fact that his career “quarterback record” is completely even-steven at 51-51-2. On some power rankings, he gets booted all the way down to the 20s. That isn’t very reasonable, so rankings closer to #14 can be stomached.

Moton had thoughts on Cousins at #14, which were rather positive:

“Typically, Kirk Cousins is efficient rather than explosive throwing the football. Nevertheless, Cousins takes the 14th spot over Baker Mayfield because he has racked up big numbers in high-volume passing seasons. He’s thrown for at least 4,200 yards in three campaigns. In 2020, the two-time Pro Bowler recorded a career-high 35 passing touchdowns. Cousins is also one of the league’s most accurate quarterbacks in recent terms, connecting on at least 67.6 percent of his attempts in each of the last three seasons. Mayfield ranked 30th in completion rate (62.8) last year. Cousins will play with one of the league’s top wide receiver duos in second-year pro Justin Jefferson and two-time Pro Bowler Adam Thielen. According to Judd Zulgad of SKOR North, he’s built chemistry with tight end Irv Smith Jr. as well. If Jefferson continues to play at the level of a star receiver and Smith has a bigger role in the passing attack, Cousins may lead a more balanced offense for the 2021 campaign.”

It seems Moton – in a “before you ask about it, Browns fans” tactic – tries to get out in front of Cousins ranking higher than Mayfield, presumably because he knows that the placement will draw ire. Often when Cousins is compared to a quarterback with big-time name recognition – folks rage. They usually denounce Cousins’ talents as rooted in “garbage time” or checkdown passing – two narratives that are categorically false.

For example, Cousins is frequently accused of “padding his numbers” when the game is out of reach. While Cousins does still perform football operations when his team is trailing, he also plays well in clutch spots. This is some perspective from the 2020 season:

The Emperor of Garbage Time has a pesky propensity for diming close-game TDs. weird https://t.co/hK3Y1QXzGf

Then, on the “checkdown Charlie” narrative that follows Cousins, the myth-debunking is even more straightforward. Just like the so-called garbage time argument, Cousins detractors use his tendency to throw the ball short as an indictment that he does not stretch the field. It’s another bogus claim. Here is evidence:

This criticism is particularly absurd because Cousins did not check down enough in 2020. His peers vastly outpaced him with passing the football underneath. The tale of the tape:

Completions for 5 Yards or Less,
Among Notable QBs,
2020:

i don't think you realize how infrequently Cousins checked down last year https://t.co/vCEIamNBKR

It’s as simple as this: Carr and Cousins tabulate passing yards, interceptions, and completion percentage at a similar clip. Yet, Carr doesn’t find the endzone like Cousins. This is also – wait for it – confirmed by statistics:

Sometimes, Kirk Cousins is put into a tier of QBs with Derek Carr.

Carr is basically Cousins — without as many TDs. And TDs are kind of important.

In fairness to the pro-Carr camp, he does earn about $8 million less than Cousins, and that is important to note with any comparison of the two.

All in all, per some national opinion, Cousins should be a similar quarterback to Baker Mayfield, Ben Roethlisberger, and Derek Carr in 2021.

As long as the Vikings make a deep playoff push, a Top 15 placement is fair for Cousins, considering some of the venom flung in his direction. But he will need to win a playoff game or two to convince Vikings boss man, Rick Spielman, of extended duty beyond 2021 or 2022.