Could the Vikings could have their pick of Justin Fields AND Trey Lance @ 14?

If ever there was a perfect month for the NFL Draft, April is it. With the Draft at the end of the month, the bulk of April is filled with mock draft after mock draft, 99% of which will be wrong and thus will bring new meaning to the term April’s Fools. That having been said, mocks are fun and they exist because NFL fan bases are enamored with the idea of landing their next big superstar. Minnesota Vikings fans are obviously no different, albeit a bit more fervent as we’re in our sixth decade as a franchise and feel no closer to that elusive first Super Bowl title. As I stated in my last piece, for our sister-site purplePTSD.com, it seems as if everyone in Vikings and NFL media are in agreement that the Vikings can’t afford another season with a pass-blocking offensive line that ranks in the bottom 3-5 of the league.

However, if the circumstances in SportsIllustrated.com‘s most recent mock end up falling into the above referenced 1%? Some may change their mind and forgive the Vikings if they use their first pick (14) on another position.

Perhaps it’s no coincidence that the Vikings have yet to win a Super Bowl and also haven’t drafted/developed a long-term solution at quarterback since Fran Tarkenton. Typically, the Vikings (a top-five franchise in terms of their regular-season record) aren’t bad enough at the right times to land a “sure thing” (or as much of a sure thing as can be in the Draft) at the position.

According to this mock? They’ll have their choice not of ONE QB of the future, but two.

In a typical scenario, the Vikings are taking an offensive lineman like Christian Darrisaw or Alijah Vera-Tucker here, or maybe an edge rusher like Azeez Ojulari or Jaelan Phillips. But with several defensive players going earlier than anticipated, this isn’t a typical scenario. Rick Spielman has seen Justin Fields and Trey Lance — both of whom he evaluated at their pro days — fall into his lap, and the value is too good to pass up. The Vikings take their quarterback of the future, who can sit for a year and learn under Kirk Cousins. Next offseason, Cousins will be traded and the next era will start. Fields vs. Lance is an interesting debate, but the Ohio State product is more of a proven commodity.

While it’s hard to argue with Ragatz’s logic, and fans would most likely revolt if the Vikings had their pick of Fields or Lance and instead took… let’s just guess… a corner, I will make the Devil’s Advocate argument that bringing in Fields or Lance wouldn’t help the Vikings’ 2021 chances and thus raises a couple interesting questions.

Depending on how tethered you think that Vikings head coach Mike Zimmer and general manager Rick Spielman’s fates are (as in, if the Vikings go 5-11 would only Zimmer get fired?), it may be hard to imagine a scenario in which Zimmer would want to draft a rookie QB to sit behind Cousins going into a season that very well could be his last. On the other/ironic side of things, drafting an actual QB of the future could help extend Spielman’s tenure in Minnesota, so one sort of cancels out the other (with Spielman obviously having final say on picks (on paper)).

Beyond that, though, the better question is whether or not you consider the 2021 Vikings to be just an offensive line away from genuinely contending. If so, wouldn’t it make more sense to finally give Mr. Guaranteed Money Kirk Cousins some semblance of a pocket to pass from? If, though, you think that they’re still going to be rebuilding for a year or two and that Cousins isn’t the answer, then this move would make more sense.

I do think it’s important to point out that thinking or believing things does NOT necessarily/automatically make them true. After all? Cousins had his most impressive season as the signal-caller for the purple, is only 32 years old, and with Justin Jefferson/Dalvin Cook only just scratching the surface of his/their immense talent(s)? This Vikings offense could become a top 2-3 unit in 2021 if they finally shore up the line and stop being so risk averse. Considering that’d be the simplest and (dare I say) only way that Zimmer makes it beyond the 2021 season? It feels like that might actually happen (unless Zimmer believes drafting yet another corner in the first round to create a human pyramid of first-second-and-third round corners might be more helpful).

If you’re literally saying: “We could have the most dangerous offense in the league if we just find a guard and a tackle!”, do you really need to roll the dice on a rookie QB? After all, there’s a reason why I put quotes around “sure thing” above, and while Justin Fields looks like one of the most complete passers in recent memory? At best he would provide the same output that Cousins had in 2020 (if he were to play in 2021 for some injury related reason) or, dare I say (again), beyond?

After all; Russell Wilson just came off what was touted as a “career year” for the perennial top 5 quarterback and guess who had nearly identical stats? Kirk Cousins.

So, obviously, this is a much longer view draft pick. The Vikings could land their quarterback for the next two decades, and they could end up with a superstar on the level of Patrick Mahomes. Or, they could whiff as they have time and time again while the remaining core defenders on their roster age out of the league and their superstar skill position players on offense force their way out of town because of the ineptitude and lack of investment/development on their side of the ball.

I started going to high school in 7th grade because I was something of a math prodigy, but I haven’t used math since 2003. So. Bare with me as I try to put together an algorithm to solve this brain-buster for our readers and the Vikings front office! 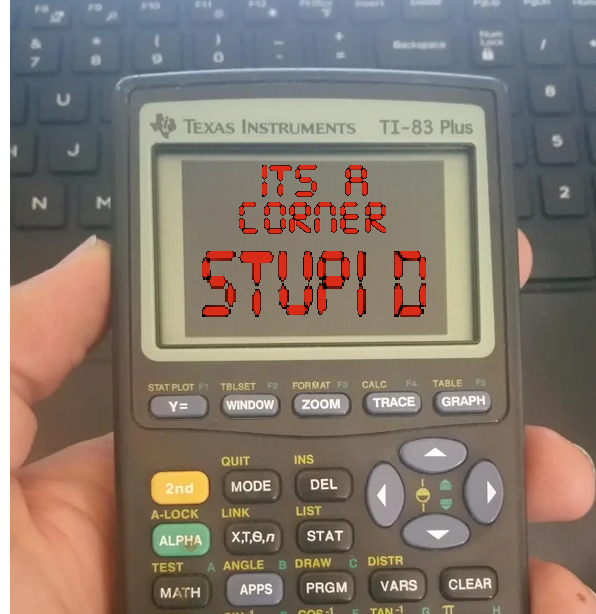 This took longer than it should have

There’s another scenario here worth delving into…

If both Fields and Lance are available and the Vikings theoretically wanted to shore up the line with a Wyatt Davis on the interior or Rashawn Slater on the exterior (pending availability), they could trade down two spots with teams that are looking for a 2021 QB and most likely move back into the second round and still get their (O-Line) guy at 16. Hopefully,aaaa in that scenario that’ll never happen, multiple teams would jockey one another for the 14th-pick, creating a larger than average return for the spot (even though the average return is pretty significant as we saw a couple of weeks ago). I’d ask my graphic calculator just what a team would have to give up to move to 14, but it’s just going to yell at me again (and we’d need to know what pick they’d be moving up from).

When it comes to the offensive line, I am in agreement with our very own Dustin Baker that the best pick not only for the line but of the realistic options at 14 is Northwestern wunderkind Rashawn Slater. You can read Dustin’s take here:

If you like what Dustin does you should definitely check out our new NFL news/analysis site, FranchiseTagged.com! Beyond that, we also launched a Draft specific network that is run by our very own Draft Expert Kirby O’Connor! TheDraftTeam.com! Together they bring our style of passionate, high quality content to the entire NFL so definitely check out those sites each day for all of your Vikings, NFL, and Draft news!

What do you think? If you had the option and power to draft Fields or Lance, who would you take? Or, would you still shore up the line?