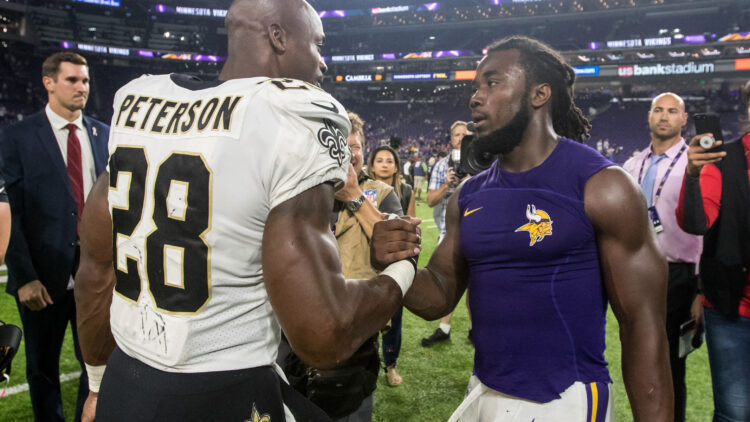 Vikings brains used the last week to compare and debate the career merits of Adrian Peterson and Dalvin Cook – an event that draws ire as folks erroneously jump to brash conclusions. Any evaluation of the two men ends with the takeaway that some party is attempting to claim Cook’s supremacy to Peterson.

That is not the case. Statistics can be compared without an agenda.

It started with this in December.

Then, NFLonCBS snatched the statistic, slapped a fancy graphic on it, and presented it as original news — six months later.

And the dueling, likeminded posts resulted in polls like this:

Fully healthy and in their prime, who would you rather have for one game: Adrian Peterson or Dalvin Cook? #Vikings

The “problem” is that no reasonable Vikings fan – or anybody else – ever originated the comparison in the interest of proving that Cook is better than Peterson. Instead, the statistical side-by-side was created to show off the underrated clip for Cook’s production to date. And indeed, his bedfellow status when likened to Peterson is surprising and alarming.  Did you know their accolades in the same amount of games were so comparable? Probably not.

Peterson – who we should not speak of in past tense as he is currently a free agent – is iconic in Minnesota lore. He inflicted his damage on opposing defenses when everyone in the general realm of the football game understood that the ball was going to him. Cook isn’t quite like that. Peterson hit home runs whereas Cook breaks off doubles and triples. Here is evidence:

Here's the cleavage between Adrian Peterson and Dalvin Cook.

The memory of Peterson busting “loose” per Paul Allen will live unrivaled in the annals of Vikings history. Cook doesn’t quite possess that tendency – and probably never will because, well, nobody really has it like Peterson.

But Peterson was stuffed a lot more often than Cook for negative yards. He’d set up the defense with teensy losses, waiting on a humongous run assured to devastate defensive morale. On the other hand, Cook rarely encounters runs for losses, at least juxtaposed to Peterson:

you are absolutely correct https://t.co/bNoguqr1Xc

Both Peterson and Cook find and found ways to get the job done, evidenced in this 100-yard game stat:

It is tremendously fair – insightful, even – to analyze Peterson and Cook against one another as players. They play the same position in relatively the same era – for the same team. Exalting Cook’s numbers is wise because the football body politic would likely scoff at any notion that suggests Cook is in Peterson’s orbit.

Newsflash: He is – just not stylistically.

Cook catches passes out of the backfield; Peterson did not. Peterson built a career on 40+ yard touchdown scampers; Cook, for the most part, does not.

Rationale analysis need not result in a “winner” between the two men. As a runner, Peterson will always win that silly contest. Just enjoy both players while understanding that Cook is not drastically behind Peterson as a matter of numbers.

Here’s a spookier one:

Perhaps we should scrap the Peterson-Cook hubbub and start a Foreman-Cook narrative.