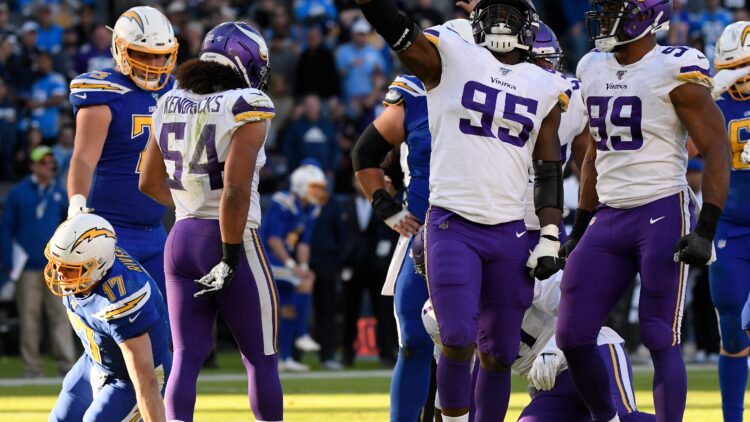 The Los Angeles Chargers and Minnesota Vikings had no documented discontent or rivalry prior to the 2020 season. Instead, the two teams mutually inhabit the lonely “No Super Bowl Wins” club.

The Chargers and Vikings play in separate conferences, squaring off once every four years per the traditional AFC-NFC conference swap schedule.

Then, Chargers quarterback Justin Herbert and Vikings wide receiver Justin Jefferson battled for the NFL’s Offensive Rookie of the Year award, ending in victory for the Chargers signal-caller. Herbert set the NFL record for touchdown passes in a rookie season with 31. Meanwhile, Jefferson shattered the NFL record for receiving yards with 1,400. Voters of the OROY honor favored Herbert, leaving Vikings fans peeved with the selection of the other Justin.

Tempers flared again this weekend — for no good reason. This was one of the controversial tidbits.

Should have kept this one in the drafts

A Chargers-themed account asserted that WR Keenan Allen was better than Jefferson, a contention so bizarre that even the Vikings official Twitter account comedically chimed in.

The tale of the tape:

But it didn’t stop there. An account profanely dedicated to slander of the Vikings insinuated that Jefferson did most of his 2020 damage in ‘garbage time,’ a period of football games when a team tabulates wasteful yards because it is trailing.

How many garbage time yards did Jefferson get ?

In 2020, Jefferson tallied 149 of his 1,400 receiving yards in situations that the Vikings trailed by 14+ points in the 4th Quarter. The tweet about ‘garbage time’ implied that the number would be far north of 149 yards — it isn’t.

As a matter of fact, Jefferson thrived in close game situations:

There is also this.

The beef surrounding Jefferson and ‘garbage time’ should have ceased there, but it did not.

A different account predicted that the Chargers would slaughter the Vikings by 46 points in 2021.

The Vikings have never lost a game 46 or more points. Minnesota was gashed by the San Francisco 49ers 51-7 in a 1984 game, and that was the most egregious loss in team history. So, if ‘Truth13Of’ is correct, history will be made in Los Angeles this season.

Later, a Chargers fan went after the Vikings quarterback history, stating that Herbert is a better quarterback than any passer to ever play for Minnesota.

The final oddity of this petty argument came from the profane anti-Vikings account. He coined the author of this article a racist.

Why’d you tag that racist ? @Jordanhug2 look at this bro

Here, the author of this article can be seen driving to the 2021 NFL Draft donning a ‘Black Lives Matter’ hat.

The Vikings and Chargers hook up at SoFi Stadium in Los Angeles on November 14th.