Brian Murphy: Vikings In Motown Always A Nostalgic Return To The Longest Day 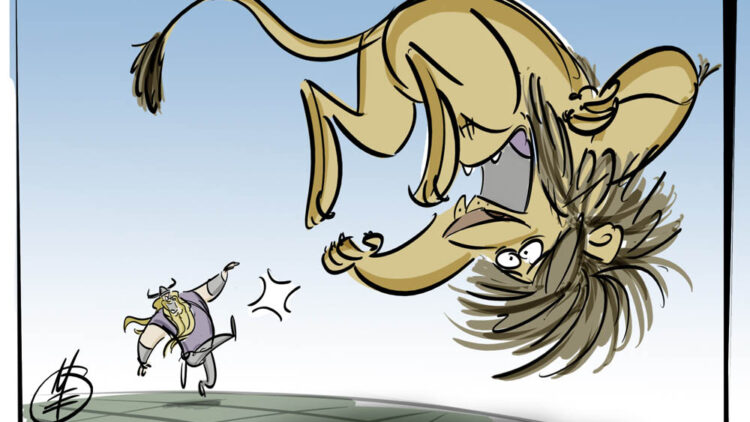 Vikings Give Lions The Boot – by Matt Engstrom

I had canceled the flight to Detroit, but the vomiting continued. Projectile, then dry heaves. It truly was a family affair – baby first, then mommy and inevitably daddy. Some of it even made the toilet.

I did not want to tell my boss there was no way was I pursuing the Vikings, Giants and snow to Motown. For I was abandoning my Pioneer Press comrades in the foxhole that Sunday night, Dec. 12, 2010, the longest of long days covering this tormented team during that wretched season. Spurning a bonus trip to my hometown was like turning down a shot of Bailey’s on St. Patrick’s Day.

The decision, though, is obvious when you are trying to hold down your spleen and your 8 ½-months pregnant wife is lecturing her uterus about premature labor while nursing our sickly 16-month-old daughter. She wound up in the delivery room anyway. You have not felt raw guilt until piling your waddling life partner into the back of a taxi at 2 a.m. while she counts contractions on the way to the hospital. But I am getting ahead of myself.

Way back predawn, I woke up like all Minnesotans to the news that the Metrodome had been murdered by a blizzard that buried the Twin Cities in 20 inches of wet snow and bad karma. The roof collapsed, wrecked the field and breathed life into the perfect metaphor for the Vikings’ crumpled Super Bowl aspirations.
Instead of shoveling us out of Laura Ingalls’ Plum Creek dugout, I spent morning, noon and night chasing the surreal news of two vagabond NFL teams searching posthaste for a stadium to play. Y’all remember the saga.

I stole glances at the muted broadcast from my St. Paul home that night while feverishly working the phones and pressing team officials about how they would play their next regularly scheduled Monday night home game and 50th anniversary celebration against the Chicago Bears.

My wife was back home convalescing with my daughter after the previous night’s scare.
She had thrown up so hard her water broke in the middle of the night. We were in a bind. Both cars were in the garage and not a flake had been cleared. My mother-in-law was snowed in at her Woodbury home. My little girl was sick. So was I. Hence my bailout, her lonely cab ride downtown and crossed fingers all around.

Fortunately, doctors halted labor, the bun stayed in the oven and I grabbed the firehose again to chronicle the latest calamity that plagued the 2010 Vikings.

Every time Minnesota visits Ford Field, like Sunday’s Week 17 yawner between NFC North also-rans, I am immediately drawn back to that chaotic weekend of what-next rewrites, ad-lib parenting and non-refundable fees. To that relentless season of stomach-churning deadlines and neck-snapping headlines.

From Favre’s will-he-or-won’t-he dithering, the three-veteran mission to Mississippi to sweet-talk the old gunslinger into riding one more time for the boys in the locker room and his ill-fated decision to whip out his dingy and smartphone.

Randy Moss’ astonishing return and 28-day, scorched-earth hissy fit that ended with him cussing out an innocent caterer and genuflecting to Bill Belichick, Tom Brady and a bemused Patriots franchise that had wisely jettisoned his tired act.

To Brad Childress’ credibility receding faster than his hairline as the autocratic head coach lost the locker room and ultimately his job after a 3-7 pratfall that included his unilateral decision to cut Moss without informing ownership, the front office or the public.

And Old Man Winter’s last laugh, which included the Metrodome cave-in, Motor City relocation, cramming a plug-in-and-play on the frozen tundra of TCF Bank Stadium at the University of Minnesota, where Favre’s brains were scrambled when he was pancaked into the turf in his final NFL snap.

All capped by a four-day odyssey in Philadelphia, where an apocalyptic snowstorm forecast fizzled and a television network feud forced the Vikings to play the Eagles in the first Tuesday game since 1946.

Another moment that will strain any marriage.
Me over the phone: “Hey, Meg. Look, I’m not going to be home tomorrow. I’ll see you Wednesday.”

“I hate this fucking team!” she screamed before bursting into tears.

What a time to be alive.

No NFL franchise before, since or ever will endure what the Vikings did over the course of five endless months. Some of the wounds were self-inflicted, like the power struggle among Favre, Moss and Childress and all the palace intrigue about who was really in charge. “Keystone Kops,” an executive sighed to me during one late-night conversation.

Poor Leslie Frazier inherited a fractured and rudderless team as interim coach before the weather turned everything into theater of the absurd.

Everyone was exhausted when the season mercifully ended Jan. 2, 2011, in, where else? Detroit. Players, coaches, front-office workers, fans, media. Poor Ragnar even went to therapy.

But I also think about the gift my wife and I received Jan. 21 that year when my son, Ethan, was born, on time and healthy. He and my daughter, Claire, now 11, are my lighthouse in the storm, with Megan in the wheelhouse.

I long ago lost my rooting interests. Moving away from home 20 years ago and covering professional sports will beat the fan out of anyone. But it has been a joy to watch Ethan grow into a knowledgeable and hungry one. And he is such a Vikings devotee. Overly confident, constantly disappointed yet eternally optimistic.

So eager, in fact, he committed a false start during that snow-socked weekend a decade ago. Hopefully, the Pioneer Press will not retroactively bill him for the cancellation fees.

Only if they take Fortnite V-bucks.