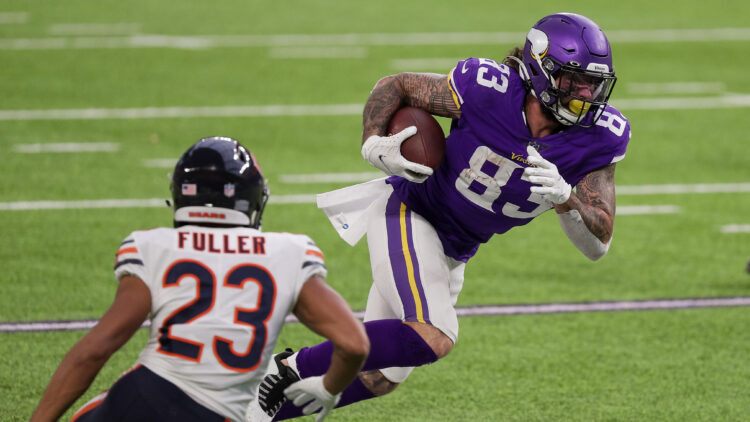 VikingsTerritory [via PurplePTSD.com] detailed yesterday the evening up for win projections between the Vikings and Packers for 2020, per PointsBet – both teams are slated for nine wins per that gambling outfit. And that made sense. The Packers are embroiled in Aaron Rodgers melodrama, kicked off during the NFL draft when multiple sources reported that the 37-year-old signal-caller no longer wanted anything to do with Green Bay’s front office. To date, Rodgers has never publicly distanced himself from the reporting, although he insists that he loves Packers fans, the city of Green Bay, his coach, and his teammates.

Vikings plus Packers equals about nine wins per oddsmakers, got it? Good.

Now, the betting arm of Fox compares the Vikings to another foe – the Chicago Bears – for an NFC forecast. Unbelievably, both teams share the same odds to win the NFC for a trip to the Super Bowl. That is – if one is wager $100 on either the Vikings or Bears, the bettor would receive $2,000 if either team reaches the Super Bowl in February.

It’s up for debate whether both teams are too high or too low on the pecking order. But as bedfellows, the logic is a little strange.

During the offseason, the Bears promoted a defensive coordinator (Sean Desai), beefed up the offensive line (Teven Jenkins), franchise-tagged Allen Robinson, signed Andy Dalton, and drafted Justin Fields. That’s fairly eventful but pales in comparison to the haul of free agents that Minnesota welcomed. The Bears will spend the rest of the offseason deciding whether to start Dalton or the upstart Fields – even though head coach Matt Nagy claims the job assuredly belongs to Dalton.

Chicago reached the postseason in 2020, only to get slimed by the New Orleans Saints in the wildcard round. FoxBet evidently has high regard for the defensive consistency that the Bears annually showcase – or it believes that Fields will run rampant out of the gate. Both concepts are feasible.

The Vikings promoted a coordinator of their own in Klint Kubiak, who replaces his departing father, Gary, on the offensive side of operations. Then, the Vikings rebuilt an uncharacteristically bad defense, adding names like Patrick Peterson, Dalvin Tomlinson, Sheldon Richardson, Bashaud Breeland, Xavier Woods, Mackensie Alexander, Stephen Weatherly, and Nick Vigil. The offensive line was finalized, evidenced by the drafting of Christian Darrisaw and Wyatt Davis.

And then there’s the intersection of the two teams – Fields himself. The Vikings were allegedly interested in the Ohio State quarterback, reportedly calling the Carolina Panthers for a version of let’s make a deal. It didn’t work – the Panthers hung up the phone while Fields continued his tumble down the board, jetting past the Denver Broncos, a team by which most folks believed that Fields would mingle.

Minnesota selected Kellen Mond as a defacto Justin Field lite in the 3rd Round, and the Bears jumped in with two feet for the Fields Sweepstakes.

On the NFC odds, the Vikings roster is more complete than the Bears, if only by a sliver. The Bears are habitually stout on defense but so are the Vikings – in most seasons. Unless Fields seizes the day from the get-go, the Vikings offense is deeper with weaponry named Dalvin Cook, Justin Jefferson, Adam Thielen, and Irv Smith Jr. In Chicago, it’s David Montgomery, Allen Robinson, Darnell Mooney, and Jimmy Graham.