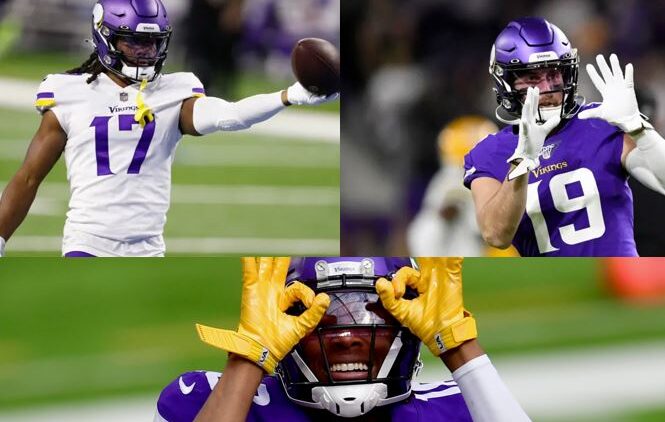 The legitimacy of Jarius Wright as the Minnesota WR3 for a few years prior to 2018 is debatable. He averaged slightly over 400 receiving yards per season, made big catches on third down, and was an overall good football player. However, that was never true-blue WR3 material like some NFL teams employ.

When he left after the 2017 season, the Vikings continued to push Laquon Treadwell as WR3, but the 1st-Round draft pick from 2016 never panned out. After that, the team surveyed players like Chad Beebe and Olabisi Johnson for the gig. Their success was more akin to that of a WR4.

Out of nowhere in 2021, Minnesota is off to a phenomenal start in finally solving the WR3 riddle. K.J. Osborn, through two games, has emerged as a bonafide pass-catcher and playmaker, taking a 64-yard pass from Kirk Cousins to paydirt in the Vikings Week 2 loss at the Arizona Cardinals.

It was the second straight game Osborn made a momentous play for Minnesota’s offense. And that’s a big deal because such moments from WR3s were close to nonexistent in 2018, 2019, and 2020.

As Osborn has conducted his mini-emergence in two weeks, the production of Adam Thielen and Justin Jefferson has not tremendously tailed off – and that’s the important part. If Thielen or Jefferson were hurt or struggling, Osborn’s ascent would be bittersweet. But that isn’t the deal. Osborn is making a name for himself in addition to the presence of Thielen and Jefferson, an impressive feat for the 24-year-old.

Through two weeks, Osborn has 167 receiving yards, 17th-most in the NFL and tied with Tampa Bay Buccaneers WR Chris Godwin. And nobody at all saw that coming. Osborn was quite good in training camp, but his quick impact in 2021 is a breakneck-pace ordeal.

Thielen is the touchdown guy in this offense for now. He’s scored thrice so far, a continuation of his recent performance since the departure of Stefon Diggs. When Thielen began his rise to power, he accrued a ratio of more yards than touchdowns. For example, in 2017, he tallied 1,276 yards to four touchdowns. Not ideal. Now, it’s the inverse. Thielen is finding the endzone while not notching a 1,000-yard season since 2018.

On Jefferson, the LSU alumnus is still hitting his groove after a record-setting rookie campaign last year. Truth be told, Osborn is stealing some of his targets – but that’s how it goes when a productive WR3 actually exists on a depth chart. The Vikings are not a pass-happy offense, so the breakout of a WR3 means targets will be taken from somewhere. At the moment, that’s Jefferson’s workload and that of the injured Irv Smith Jr.

Osborn has a long way to go for cementing his WR3 stature in the league. The second-year wideout is a big fish in a small pond right now for WR3 because the Vikings were so starved for someone to make the most of the assignment. Osborn is doing that.

Most importantly, all of the pass-catchers are contributing. And they’ll have to continue to do so as Minnesota attempts to rectify an 0-2 start, the second in as many seasons. Head coach Mike Zimmer now has the wide receivers to help with the task. Currently, the Vikings have three men inside the NFL’s Top 35 list for most receiving yards.