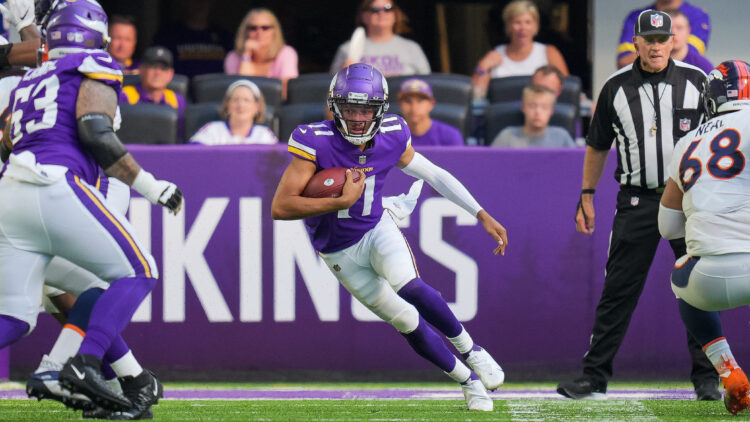 As much as I hate to borrow an adage from our rivals in Green and Yellow, Mr. Rodgers said it best “R-E-L-A-X”. Guys and gals, it’s Week 1 — of the preseason — there will be mistakes (and there were mistakes aplenty). The talking heads and some in Vikings land will tell you the sky is falling. I saw someone on Twitter suggesting our season was over because we have no depth behind Tyler Conklin. The boys in purple have given us plenty of reasons in the past to be pessimistic, but let’s take a collective breath. Look at some of the positives and refocus on some real things we can take away from the remaining games on the schedule.

The stats were less than impressive, 6/16 for 53 yards won’t exactly drum up excitement from the fanbase. However factor in the less than stellar pass defense and a collapsing pocket and he displayed mechanics that were sound and the ability to make plays happen when they didn’t appear to be there. The move and cut we saw here were a step in the right direction and highlighted the ability to make plays happen when nothing is there. I for one am excited to finally have a backup QB that has a plan and an opportunity to develop into a starter vs another big ten backup that won’t go anywhere.

The depth chart leads you to believe that Davis will be buried on this team. You and I both know that isn’t likely the case, Rick and Co have invested a lot of top-tier draft capital into the offensive line in recent years. The COVID absence was a detriment, no one wants to see a rookie miss time in camp. There was a lot to like from his performance last week. Especially when you compare it to….. well….. you know.

At this point, a guard that doesn’t give up a safety on drive one is a BIG WIN. His quote today on his NFL debut leads me to believe he at least has the right mindset. “It was a huge jump definitely from college, definitely had my welcome to the NFL moment my first play. A huge thing for me was just bouncing back from that, biggest difference for me is either one is as strong or stronger than you…it was just how much technique matters and working with coach Phil.. trying to sharpen my skills and stuff I was able to get away with in college, you couldn’t get away with that now.” Love to see it.

Compare it with the guy in the tweet below and, well you know why I am so excited for his development.

This one is a bit of a surprise. Cameron was the highest-ranked rookie CB in the league last year. I along with most of you had very high expectations heading into year two. That being said, He, uh, he didn’t look great last Saturday. Couple this with being behind Breeland on the depth chart I can’t help but wonder if he has been injured or dinged up this far through camp.

Take a look at the video below, Bynum made the wrong check here. Dantzler looks like he is running a little off, he left the game shortly after this. With Peterson being so high on Kris Boyd you wonder where this may leave Cameron.

At the end of the day, this is week one of the preseason, there will be plenty of time to sort all this out. We sat 31 players, we cant focus on the score. Take a look at specific players and how they are used, we can gauge things they do well and take it week by week.

The roster will continue to take shape as we see some additional cuts here over the next few days. So I will end this article where I started, take a step back, deep breath, grab a grain belt, and R-E-L-A-X