A Few Tight End Options for the Vikings to Consider 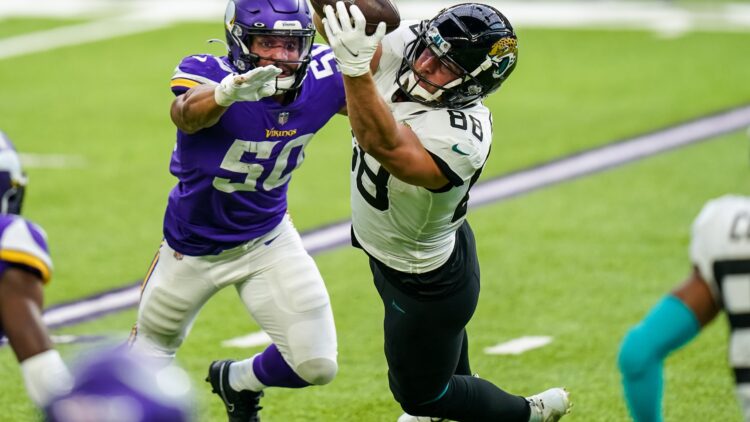 The Vikings tight end room has gotten very thin in recent weeks. Tyler Conklin has sat out the entirety of the preseason due to injury, and now it seems that Irv Smith Jr will miss at least the start of the regular season with a torn meniscus.

I don’t know about everyone else, but this news about the third-year tight end caught me off guard. The Vikings television broadcast showed Smith in good spirits on the sidelines, and when he was interviewed, he showed no signs of an injury.

Either way though, Minnesota needs to find some way to replace the young tight end. He seemed on the verge of a breakout season, and he was poised to be a massive part of the offense. Here are a few options for the Vikings to consider.

This is probably the best option for Minnesota, especially if Smith can come back soon. As effective as Smith was down the stretch of 2020, Conklin was just as impactful in many ways. I talked about this last week in PurplePTSD’s TE fantasy football preview, but if the 26-year-old is good to go for week one, he is a great option to take over TE1. Just to show that, let’s compare the numbers again. Over the final four weeks of the season, here are Smith’s receiving stats:

And here are Conklin’s:

In actuality, Conklin already was TE1 for the Vikings in terms of targets. Smith was just a bit more effective, especially in the red zone. This makes sense as Smith is undoubtedly the more talented of the two. It’s also notable that in the month of December, the snap numbers were almost even with Smith playing 203 snaps and Conklin playing 202 snaps.

The biggest question here would be with the TE2 spot. Minnesota often runs dual tight end sets (hence the aforementioned even snap counts), which is great when the two tight ends are Smith and Conklin. We’ll get a better idea of things when the actual depth chart releases, but it seems that Brandon Dillon would be the current TE2.

Dillon had a decent preseason, especially in the final game against Kansas City, but is largely unproven during the regular season. He has just one career reception for six yards over the course of two years with the Vikings. If Minnesota chooses to go this route, Dillon will have to step up in a big way.

One of the biggest performer for the Buccaneers this preseason has been tight end Tanner Hudson. The 26-year-old was a UDFA in 2018, and despite his preseason numbers, he is still in Tampa Bay’s tight end room with Rob Gronkowski, Cameron Brate, and O.J. Howard. The fourth-year pro probably won’t see a ton of playing time with the Bucs.

Because of that, the Vikings may be able to snatch him away from Tampa’s clutches if they so chose to. Of course, it may be better to wait and see if the Buccaneers choose to keep him on the roster or not. As TE4 right now, there is at least some possibility that he will be cut prior to Tuesday’s deadline.

Another route that wouldn’t require a trade could be signing veteran free agent Tyler Eifert. The 30-year-old has made a living as a solid receiving option at tight end. With Minnesota traveling to Cincinnati for week one, it would also be a chance for a welcome home party; Eifert spent his first seven years with the Bengals.

The biggest issue with an Eifert signing would be that he comes with his own set of injury concerns. He’s suffered a pair of extremely gruesome injuries; one of which was a severe elbow dislocation while the other was an ankle break. I wouldn’t recommend watching videos of either.

After the elbow injury Eifert bounced back in 2015 to have his best season where he caught 52 passes for 615 yards and 13 TDs. Of course, these days of production are probably gone, but the fact that 25% of Eifert’s receptions went for TDs is at least intriguing.

Over the past couple years, Eifert has been mostly healthy, too. He’s played in 31 of a possible 32 games since 2019. While the former Bengal has started just eight of these games, he’s continued to make his presence known as a receiver. If nothing else, Eifert could be a very nice red zone threat for Minnesota.

This move is one worth trying if Smith is out for the long-term future. It has long been known that Zach Ertz wants out of Philadelphia. Ertz is undoubtedly the most proven player on this list and would provide Minnesota with an immediate dynamic threat at the tight end position.

The former Super Bowl champion had a down year in 2020 as he struggled with a high ankle sprain suffered in week six. Ertz missed the following five games on his way towards recording his lowest receiving total (335 yards) and TD total (1) of his career.

A change of scenery might be what Ertz needs, and with his lack of preseason reps, his trade value may never be lower than it is right now. Of course, there may be other teams hit with the injury bug (i.e. New Orleans) that could look to make a move for the 30-year-old.

It’s noteworthy that Ertz carries with him a cap hit of $8.5 million for anyone that trades for him. However, due to some slick money moves from Rick Spielman and Co., the Vikings currently sit with about $13.3 million in space, per Over the Cap. Minnesota also doesn’t have to worry about him being on the books next season as he becomes a free agent.

The Vikings have made some moves that show a desire to win this year. After the Everson Griffen signing, we all assumed it would be the cherry on top that signifies the end of Minnesota’s moves. Making this one last trade would show the Vikings are willing to go all in on being a contender in 2021.