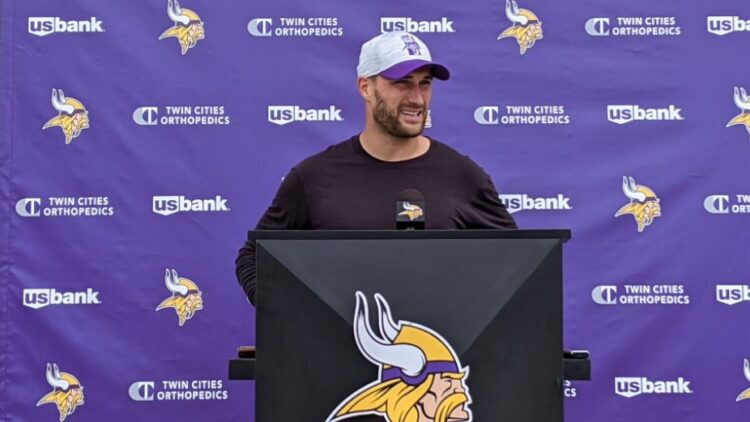 Day One unfolded as Oli Udoh received unexpected starting reps at right guard, Kellen Mond and Ihmir Smith-Marsette shined for a few plays, and vibes felt more like normal with fans returning to a Vikings event for the first time since late in the 2019 season.

On a smoky day due to Canadian wildfires, here are four takeaways from the second day of Vikings 2021 training camp.

Michael Pierce will be fine, memories of Danielle Hunter at this time last year be damned. In fact, the day that the news broke about Pierce’s calf malady — that wasn’t even the day it happened. The injury occurred weeks ago when Pierce was doing “defensive end stuff.”

Michael Pierce said his left calf injury happened “about three weeks before you guys found out.” He’s been doing more the past two days than the #Vikings expected, and said he’s feeling good. pic.twitter.com/j0eCoiS8Ir

With Hunter’s neck last year, the entire ordeal was shrouded in quiescence. This is not that. From the man’s mouth, Pierce is offering assurances that the sky is not falling.

Michael Pierce says he expects to be back practicing soon. Still recovering from a calf injury but he says he feels good.

And the Vikings need him. Linval Joseph departed the franchise after the 2019 campaign, leaving space for Pierce to join via free agency from the Baltimore Ravens. He opted out last year due to coronavirus concerns while a gaping hole widened on Minnesota’s defensive line. Alvin Kamara could tell you all about it.

Pierce will be back soon, barring an odd setback.

Dan Bailey left the Vikings in the spring, showcasing a solid 2019 season but a downtrodden follow-up effort during the pandemic season. From Blair Walsh, Kai Forbath, Daniel Carlson, to Bailey — here we go again with kicker instability.

But the strategy for improvement this time around is less bold. General Manager Rick Spielman decided not to attach high expectations to a rookie kicker or renowned name like Bailey, instead singing on for the services of Greg Joseph, who played for the Tampa Bay Buccaneers on their practice squad during the recent Super Bowl run.

You aren’t supposed to know Greg Joseph, and that might be by design. “Big names” have done the Vikings little justice in the last half-decade.

For a day, Joseph was pretty damn good.

K Greg Joseph hit all of his kicks at the end of practice.

Soon, Memphis rookie, Riley Patterson, will rejoin Joseph (after a PUP list stint) for a kicker competition. But Joseph won’t have much anxiety over this if he continues to drill camp kicks. Let’s hope Joseph’s success translates to preseason games as such exhibition events have derailed dreams for Vikings kickers — some even before they started.

Kellen Mond was drafted to potentially take over the franchise in the event Kirk Cousins does not take the team to the Promised Land in 2021 or 2022. The Texas A&M rookie was on several teams’ draft boards in 2nd-to-4th round territory, but it was the Vikings — in a bit of a surprise — who won the Mond Sweepstakes.

Just because he’s the almighty contingency plan to Kirk Cousins — does not mandate he’s the QB2 this season, though, according to new offensive coordinator Klint Kubiak:

#Vikings OC Klint Kubiak, in the battle for the backup QB job said that practices will be important but perhaps a bit more important will be how they "perform with the lights on" in preseason games.

For Vikings in-the-weeds news, this is significant. Mond is the scintillating new idea — the anti-Cousins, if you will — but the notion he will have to compete with Jake Browning is a pumping of the brakes. Now, if Mond is truly fit for his mini-hype train, he should have no problem seizing the backup quarterback duties.

All the more motivation to get excited about Vikings preseason games, indeed. Bright lights await.

The Vikings head coach is known for defense, defense, and defense — while being a bit mum to reporters and prickly to opposing teams. And, that is more than suitable for a hard-nosed football coach.

Since yesterday, Zimmer has offered his candid thoughts on the coronavirus vaccination, affirmed he kept an eye on the Aaron Rodgers melodrama, and all but admitted that Brian O’Neill will likely get paid soon — all with a smile on his face.

Zimmer is usually to-the-point and no-nonsense at training camp. This version is softened and happier. Consider it the grandfather effect.

Being a grandpa softened him up haha

Zimmer became a grandpa this offseason.