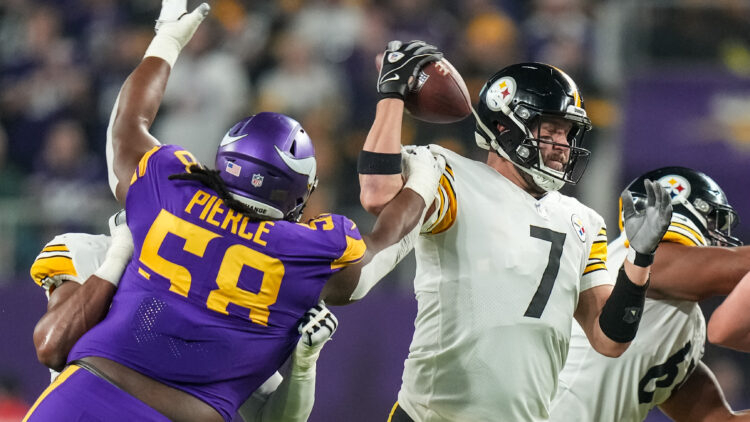 Since signing for the Minnesota Vikings before the start of last season, we simply haven’t seen enough of Michael Pierce. The former Raven opted out of his first season with the Vikings due to health conditions and fear about the Covid-19 pandemic. Returning this season, he went down with an elbow injury in practice leading into the Cleveland Browns game.

This is a shame because when on the field, he’s been effective. Don’t let the Vikings porous run defense fool you. That’s not on Michael Pierce or his partner in the middle, Dalvin Tomlinson. Both are having solid seasons.

The Vikings major problems are coming from defensive ends not being able to seal the edge and linebackers failing to make tackles in the gaps. The backup defensive tackles Sheldon Richardson, Armon Watts, and James  Lynch have also struggled in run defense when called upon.

Using Pro Football Focus as a reference, Michael Pierce is the ninth-best interior defensive lineman in the NFL this season. He is one of only four Vikings with a PFF grade above 80, scoring 81.4. The other three are Justin Jefferson, Kirk Cousins, and Harrison Smith. The Vikings don’t have many players rated as top 10 in their position. So, let’s not be in a rush to give one away. Michael Pierce has been solid and shown great athleticism when on the field for the Vikings. Admittedly, that hasn’t been as much as I would have liked, but the Covid issue was unprecedented.

This season, the elbow injury dragged on longer than expected. But for a player who plays with his hand in the dirt, the elbow needs to be right. Tou can’t patch it up and hope for the best. We saw what happened when they tried that Week 4 against the Browns. He clearly wasn’t right, causing his worst performance of the season until he was taken out of the game. That likely caused the setback in recovery.

There is a lot of work to be done on the defense in the offseason. When you include the out-of-contract players — which include starters at every position except defensive tackle — there are huge holes on the team, plus the need for better depth. Michael Pierce and Dalvin Tomlinson are two solid building blocks to build from. There is cap space to think about, and Pierce has a cap hit of $10.5 million next season, with $4 million in dead cap. His is one of the few big contracts that the Vikings have room to maneuver with.

Pierce has two more years on his contract. Even though he turns 30 in November next year, he is in the best physical condition of his life. The work he did during his year away from the game is there for all to see. Once a big mammoth of a man who would stop the run, he now has so much more to his game. He is a genuine threat as a pass rusher, and the athleticism he showed on the following pass block against the Los Angeles Rams belies his size.

He has a lot of good football left in him, more than the two years on his contract in Minnesota. An extension of a year or two to help alleviate the cap and keep Michael Pierce in purple would be my plan of action. Time will tell what happens in the offseason. It could be a time of significant upheaval and change. It also could be a case of Spielman, Zimmer, and Cousins all still in Minnesota and only a few tweaks made.

Whatever happens, I just hope Michael Pierce is still a Viking in 2022.