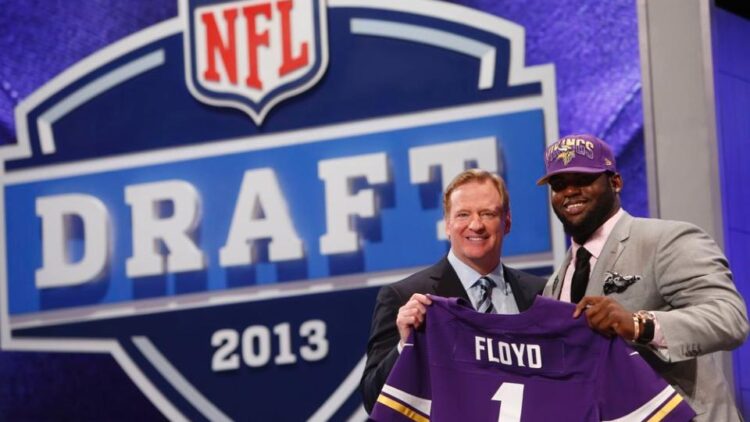 The 2021 NFL Draft is only a few days away, and the Minnesota Vikings have several positions they’re hoping to address with their 10 picks. Channelling my inner Rick Spielman, I tried my hand at a mock draft using the Pro Football Focus Draft Simulator…

The simulator can be found here: https://www.pff.com/draft/nfl-mock-draft-simulator

Most of the mock drafts I’ve seen in articles and on social media include so many trades that they become quite unrealistic. To keep it simple, I stuck with the picks that the Vikings currently own. 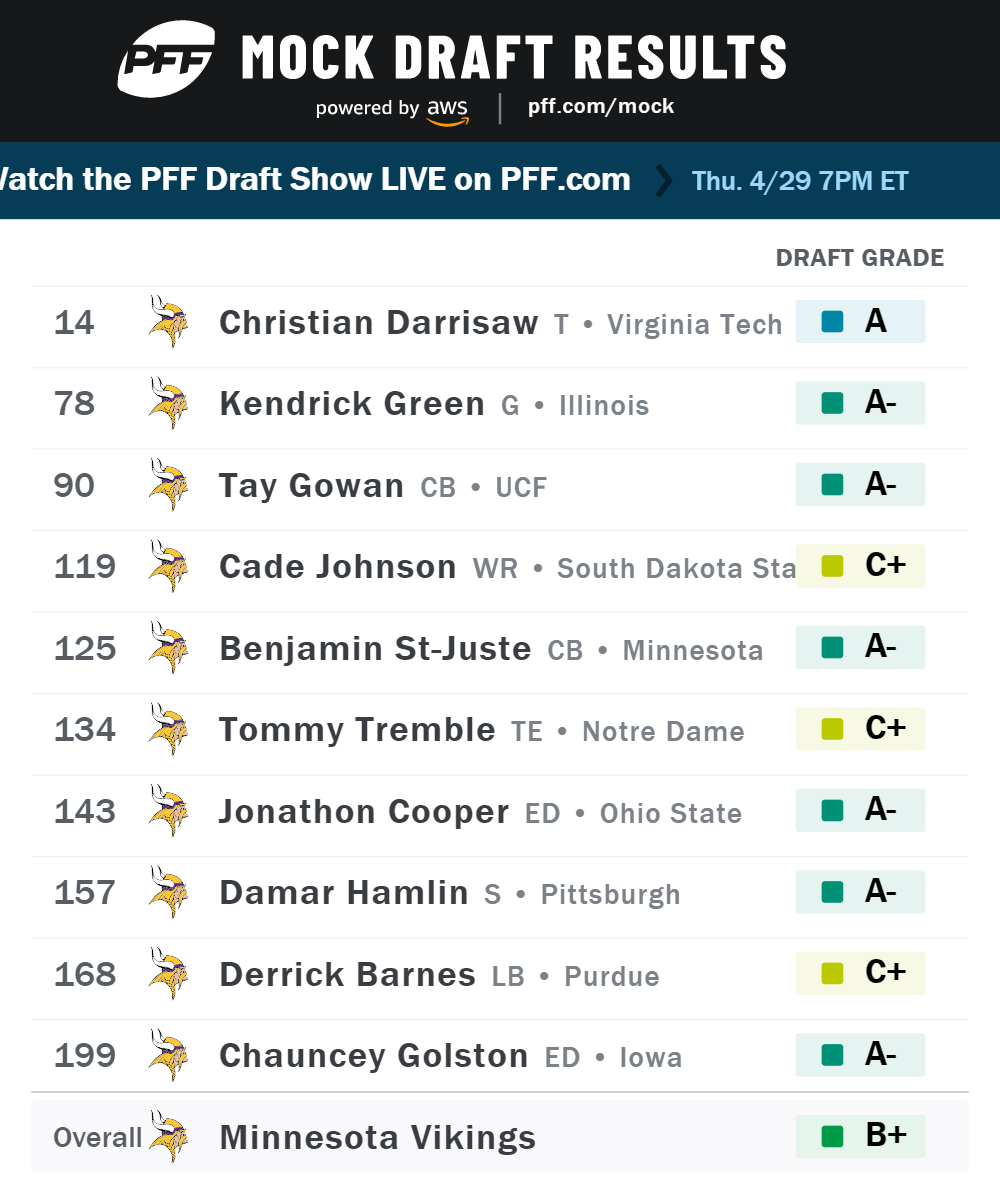 A dominant blocker out of @HokiesFB.

Where will OT Christian Darrisaw land in the @NFLDraft?

After years of offensive line turmoil, I attempted to fix the Minnesota offensive line with two early picks. Christian Darrisaw is a highly ranked prospect that can play tackle or guard thanks to his good technique and athleticism. I would play him at guard, and move second year player Ezra Cleveland to left tackle where he belongs.

Green isn’t as big a name as Darrisaw, but he can shore up whatever guard position remains open. The Illinois product is on the smaller side at 6’2”, but the Vikings prefer linemen who have good technique and are mobile rather than oversized maulers.

Kendrick Green = twitched up w/excellent center of gravity & core strength at 6'2" 305. Dude is a ball of lighting with an iron head to jolt/stun defenders at the point & strong hands to latch/control. Former super HS athlete & high level wrestling background shows up on tape. pic.twitter.com/sFlRMa8DSP

With Jeff Gladney’s future uncertain due to a recent arrest, I needed to address corner right away. The Vikings already have three bonafide starters in Cam Dantzler, Patrick Peterson, and Mackenzie Alexander, but the team was only one injury away from being in big trouble. I’ve watched plenty of film on Gowan, and I love the way he defends receivers on deep routes and rips at the ball after catches. He also plays with good instincts in zone and is sure-handed on interceptions.

Great job by Tay Gowan undercutting the route and then getting not 1 but 2 feet down. NFL ready. Lol Great play. pic.twitter.com/6lqKnVWpw0

Some mock drafts have the Vikings taking a wide receiver in round one. Minnesota already has plenty of great pass catchers, so I waited until round four to nab an exciting small school player in Cade Johnson. At 5’10” and 175 lbs, Johnson is a great modern-day shifty wide receiver. He didn’t play in 2020 due to covid concerns, but in 2019 and 2018, he tallied eight and 17 touchdowns, respectively. He should be very healthy after a year off from football.

Being that I am University of Minnesota alumni, I couldn’t pass on corner Benjamin St. Juste when he fell in my lap midway through the fourth. He was a lone bright spot on the Gophers defense this past year with his good physicality, and he rounds out a revamped Vikings cornerback group.

With Kyle Rudolph in New England, the Vikings are once again in the market for a mid-round tight end. They already have Tyler Conklin and Irv Smith Jr., but Minnesota loves three tight end sets. Tommy Tremble is from a winning culture at Notre Dame (coincidentally the same school Kyle Rudolph went to), and his addition will create good friendly competition amongst the young Minnesota tight ends.

Tommy Tremble with the bunny hops! 🐰

Without messing with trades, I didn’t see a good opportunity to nab a pass rusher until this point. I use my last fourth round pick on Jonathon Cooper and trust that defensive line coach Andre Patterson can coach him up. He had 3.5 sacks in a covid-hampered 2020, and I’m hoping he can boost those figures in the north. Like Tremble, Cooper is comes from a winning culture in Ohio State.

Cooper is a no-nonsense rusher. Straight line attacks. Power rushes. Inside moves. Cooper isn’t looking to run around OTs – he wants to go through them!

The Vikings added Xavier Woods in free agency, but their safety cupboards are still pretty bare. Damar Hamlin has some good reviews (and six picks) out of Pitt, and he can be mentored by All-Pro safety Harrison Smith.

Damar Hamlin 2,500+ snaps in career… Tough in run support but a savvy coverage safety on backend. Was initially a CB prospect out of Central Catholic https://t.co/n1lkFe11kG pic.twitter.com/iIxppoXF1K

Minnesota’s linebacking corps is in pretty good shape with Anthony Barr and Eric Kendricks, but at this point in the draft, it makes sense to add some depth in Derrick Barnes. Clearly I value Big Ten players.

One of fastest rising LB in 2021 draft is @BoilerFootball Derrick Barnes. Showed edge rush ability as junior with 7.5 sacks and SL-to-SL speed playing off the ball this year. @derrickbarnes21 also had some good coverage reps for 245-lber at Senior Bowl with his reactive trigger. pic.twitter.com/ZRouUoxD7D

Surprise surprise, another Big Ten athlete to cap off my draft. Chauncey Golston of Iowa is very raw, but he has a long 6’5” frame and managed 5 and a half sacks in his covid-shortened senior year. Again, the Vikings are good at developing defensive ends, and he’ll at least make for a good training camp body.

#Iowa DE Chauncey Golston #57 is going to play in the NFL beyond his rookie contract.

Upright and a little stiff, but long and physical. Nonstop hustle. DE/DT versatility. One of my favorite day 3 values this year. pic.twitter.com/tPBfKGHCfr

Overall, I was very pleased with this mock draft. I avoided temptations and stuck to addressing actual needs. The offensive line should be the best it’s been in recent years after my two high selections, while I wish I had nabbed a defensive end earlier in the draft. It also might have been nice to pick up a running back, or maybe a kicker late in the draft, but those can wait until undrafted free agency.

Stay tuned to see if any of my picks come to fruition! Last year, I was right that the Vikings would draft Harrison Hand, so you never know…