Here’s what a J.J. Watt Trade Could Look Like for the Vikings 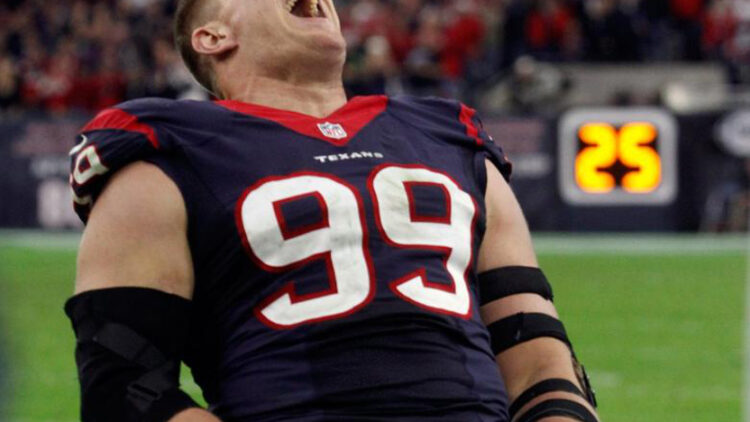 The Texans roster could look very different come this regular season. Trade scenarios have been long discussed surrounding quarterback Deshaun Watson, especially now after his formal trade request. However, speculations are now arising that J.J. Watt may have played his last snaps in Houston as well. It makes sense given this soliloquy at one of the final press conferences of the 2020 season.

Here was the end of JJ Watt’s press conference after the Texans’ 37-31 loss to the Bengals. pic.twitter.com/BeOmzDbNcS

With the Minnesota Vikings desperately needing to improve their pass rush, it would make sense for them to at least reach out to Houston. That said, what would a trade package look like to bring the veteran pass rusher to Minnesota?

Watt will be 32 when the season begins which means he may be approaching his decline, but as of now, he still demands a lot of attention from opposing offenses. That is, when he is healthy enough to stay on the field.

He was healthy in 2020, playing all 16 games for just the second time in the last five seasons. He recorded five sacks and 14 tackles for loss this season. These aren’t necessarily the stellar numbers we would expect from Watt, but both numbers would have led the Vikings this season. Not only that, but in Minnesota, he would not be the only one drawing attention along the defensive line. Danielle Hunter and Michael Pierce would take a ton of pressure off him.

However, the biggest question is whether or not the 10-year veteran remains healthy. There certainly is a lot of risk involved in a trade for Watt. That along with his age probably drives his asking price down more than it otherwise would.

Turns out, we may have a bit of insight as to how a Watt trade could go down. Kyle Joudry over at The Vikings Gazette inquired about a Watt trade back in December and spoke with Tim of Battle Red Blog, one of the leading Texans’ sites, about details involving a potential trade. Make sure to check out both sites after reading this article.

First of all, Tim said that Watt has been more frustrated than ever this season (as you can probably gather from the press conference posted above), and if he were to request a trade, the Texans would likely do whatever they could to move him. We might be fast approaching that point as it stands in late January.

Tim also spoke about what Houston’s asking price would be. Basically, Tim estimated that he would not expect Houston to get a first round pick in return, but that they would most likely ask for a third rounder, if not multiple picks.

That seems like a reasonable price for a player with the ability of Watt, but would Minnesota be willing to offer that up? My guess would be yes, given that they (hopefully) would use a pick in that range, if not higher, on a pass rusher anyway. I would rather bet on Watt’s talent than take a flyer on a third and fourth rounder who probably isn’t ever going to reach Watt’s ceiling.

Money is the biggest concern over a J.J. Watt trade, but it is easily fixed. Via Spotrac, Watt is owed $17.5 million in 2021. That is a massive amount on the surface, and the Vikings shouldn’t touch this if Watt isn’t willing to renegotiate. One, it would handicap the Vikings ability to pay other key players this year. Two, Watt is in his final year of his deal and could walk after this season whereas you would potentially get four or more years out of a draft pick.

That said, Minnesota should be able to rework Watt’s deal to immediately ease the cap. He has been on record saying his main desire is to win a Super Bowl. A renegotiation is in the best interest of any team trying to do that.

If the Vikings can extend Watt’s contract over two or even three years, his cap hit per year would probably be brought down to anywhere from around $6-9 million. That is much more reasonable, and it also ensures multiple years of a Danielle Hunter/J.J. Watt pass-rushing duo. That would obviously be huge.

Obviously, this news is still developing, so we don’t know what Houston would actually ask for Watt or if they would even trade him at all. They have been stubborn with Watson’s trade request as of now and could be the same way with Watt. The Texans may just be willing to let him play out his deal and let him walk next offseason. They may also just cut him since he has no guaranteed money left on his contract.

Along with questions from Houston, we don’t know how willing Watt would be to negotiate with a receiving team about an extension. Watt may feel his best interest is to test free agency next year and pick a team that he believes will help him win.

One thing is certain, a defensive line with Danielle Hunter and J.J. Watt opposite of each other would be a nightmare for opponents. Rick Spielman is no stranger to big deals, either. Case in point, the Yannick Ngakoue trade prior to this season. Sure, it didn’t necessarily work out like the Vikings hoped, but a lot of things didn’t work out this year. Unless the asking price becomes something like a first rounder or multiple picks in the third round and above (which seems extremely doubtful), the Vikings should absolutely get in touch with the Texans about a potential deal.