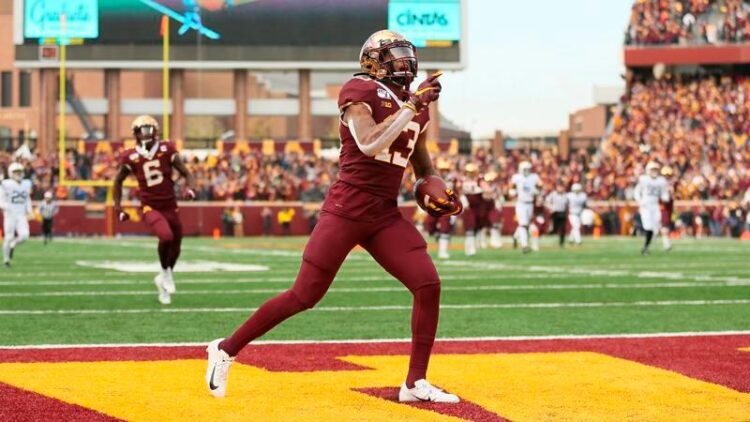 The Minnesota Vikings made a splash last offseason when they gave their franchise quarterback Kirk Cousins a contract extension. They then traded a seemingly unhappy Stefon Diggs to the Buffalo Bills in exchange for a first round pick. That first round pick turned into the best rookie wide receiver the Vikings have had since Randy Moss, Justin Jefferson.

One would think that this would have solved the Vikings wide receiver room, and it has done wonders for it, but Minnesota still seems to be in need of a solid third wide receiver. In a day and age where the top teams have at least three, if not four or five, great pass catching options, the Vikings have two real threats, an up and coming tight end (or perhaps two according to Josh Frey), and a screen catching running back.

After a good rookie campaign filling in for an injured Adam Thielen, Olabisi Johnson totaled just 14 receptions in 2020 and zero touchdowns. The oft-injured Chad Beebe had two touchdowns, including a game winner against the Carolina Panthers. Of course that game winner came only after Beebe muffed a punt to give Carolina the ball and some hideous clock management from Teddy Bridgewater and co.

After those two, the outlook becomes even more bleak with only special teamers Dan Chisena and K.J. Osborn being the other consistently active wide receivers. With a lack of cap flexibility, it may be smart for the Vikings to look to the draft to secure a better WR3, and eventual replacement for Thielen.

One place the Vikings could look is just a few miles away from US Bank Stadium on the campus of the University of Minnesota. I am of course talking about the best receiver to play for the Golden Gophers since Eric Decker, Rashod Bateman.

Bateman rode a roller coaster in 2020. He was one of the first big name college players to announce that they would not be playing due to concerns over COVID. He then decided to play when Minnesota announced that they would in fact be playing some games despite the pandemic. He played in the Gophers first five games of the season, but sat out the next two to prepare for the NFL.

It’s hard to say whether Bateman’s lack of production came from his lack of prep for the season with COVID, Gophers quarterback Tanner Morgan taking a nosedive in his effectiveness, or the fact that Gophers running back Mohamed Ibrahim was setting the world on fire with his rushing ability. It was a strange year all around, and it only slightly hurts Bateman’s draft stock.

What will surely hurt Bateman’s stock more is the lack of an NFL combine in 2021. Bateman would probably have finished with top marks in several categories, including the 40-yard-dash. It also would have given him the ability to show off his route running and ball skills, something that does not come across well in his 2020 game film.

Speaking of his game film, it tells a very interesting tale. In 2019, Bateman looked like one of the best receivers in college football. His ability to take the top off defenses gave Minnesota the ability to put defenses on their heels all game long.

Couple that with his RAC ability on crossing routes and screens and you could see why he dominated the Big Ten that year and won the conference’s Receiver of the Year Award.

In 2020, he looked much more timid and not like the dominant force he could be. He looked like he had improved in finding soft spots in zones, something that Thielen has been known for over his NFL career, but it seems to come at the expense of decisiveness. He didn’t look as sharp on cuts and rarely lost defenders because of his change of pace. Both of those are things he can do, as shown in 2019, but his 2020 film doesn’t reflect that.

If the Vikings want to bring in everybody’s favorite Gopher, they will need to target him early in day two. His draft projection right now is anywhere from the early second to mid third round. If receivers start sliding, he could find himself available when the Vikings pick in the third round. In order for Minnesota to compete for Bateman in the second, they would need to move up since they do not have a pick in that round as of now.

So, would bringing in Bateman be a good idea? If he’s available in the third round, sure. If the Vikings have to give up anything to get him, no. I love the guy and his skills would translate well to the NFL. He’s got the body and the ability and pairing him with one of the NFL’s best deep ball throwers in Kirk Cousins, plus having two stars in front of him seems great, but the Vikings have other needs they need to address in the early round of the 2021 draft.