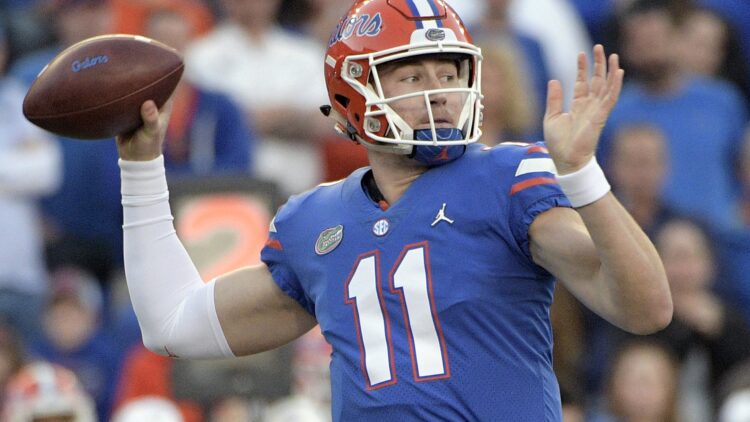 In this Nov. 3, 2018, file photo, Florida quarterback Kyle Trask throws a pass during the second half of an NCAA college football game against Missouri in Gainesville, Fla. (AP Photo/Phelan M. Ebenhack)

Yesterday I wrote about how the Minnesota Vikings could use their hypothetical extra first round pick if they moved on from Kirk Cousins to target Alabama’s Mac Jones. This wouldn’t require them to move up in the draft as Jones is projecting to go behind Minnesota in the first, or even fall out of the first round.

Today, we’ll be looking at a quarterback that likely wouldn’t require the Vikings to move anybody to target. So, this is an option even if they keep Kirk Cousins, and they might want to if they’re thinking about selecting the University of Florida’s Kyle Trask.

Trask played in 27 games in three seasons at Florida, but didn’t become the Gators full-time starter until 2019. When he did get his chance, he excelled, recording 7386 passing yards, 69 passing touchdowns to 15 interceptions, a completion rate of 67.9%, and added eight rushing touchdowns. He also led the Gators to two bowl games, and a 1-1 record in those bowls.

When you watch Trask on film, you see a rhythm passer who throws a good ball using very good mechanics. His ball placement skills are very good. With the nation’s best tight end as his main target, he was incredibly effective passing to the boundary in the red zone.

Trask also possesses prototypical size for a quarterback. At 6’5” and 239 lbs, Trask can take a hit. He did lose some time in his first two years at Florida to both foot and knee injuries the latter needing surgery. However, in his last two seasons, he didn’t miss any snaps due to injury, despite rushing the ball 127 times.

Trask is a willing runner of the football, but he doesn’t have the speed to back it up. He’s not a statue, and he can move up in the pocket to deliver the ball. However, he doesn’t have the mobility to move defenders around and make big plays with his feet. He can extend the pocket, given that it’s part of the play design.

It’s going to be a rough transition to the NFL for Trask. He ran a lot of rhythm plays with single reads at Florida. When his first or second read was not available, he had a tendency to breakdown and not stay mentally engaged with the play, leading to him either taking sacks or throwing some of his worst interceptions.

Along with needing to speed up and adjust to the mental aspect of the NFL, Trask will need to learn to use that big frame to drive the ball and get a stronger arm. When tasked with throwing deep, he can sling it. This is of course assuming that he has adequate protection and time to fully utilize his frame. At the next level, he’ll need to be taught how to speed up this motion so he can use that weight on both those deep shots with a windup, and on short routes with tight windows.

If the Vikings want Trask, they could likely have him in the early third round. Trask probably would have been helped by getting some more workouts in the NFL Combine, but with that not happening this year, he’ll have to settle with his stock as it is now. Being that he’s not in the upper tier of quarterbacks in the 2021 NFL Draft, he may just continue to slide and slide and slide. This makes him an interesting value proposition for a team like Minnesota who probably need to start searching for their quarterback of the future sooner rather than later.

It’s actually not a bad idea to bring in Trask and sit behind Cousins for a year or two until his cap number is reasonable enough to be cut, or his contract runs out. Trask can learn the speed of the NFL game while the Vikings compete with one the NFL’s top 10 quarterbacks. Even if Trask only pans out to be an okay quarterback, he can bridge you to your next real franchise guy without much fuss. Sure, he may not set the world on fire, but he should keep you relevant with a good team around him.