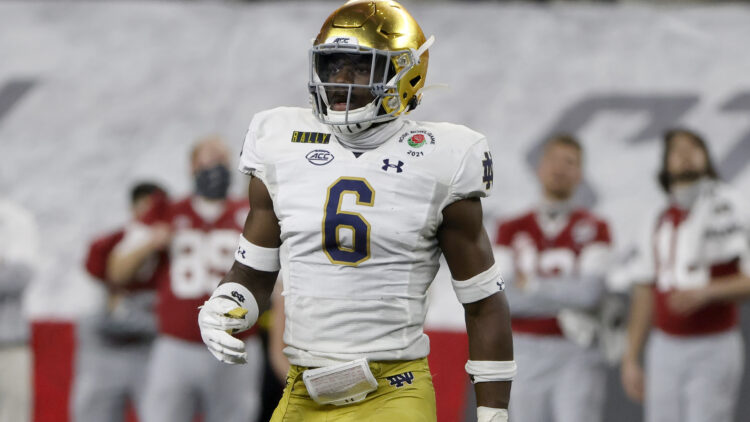 To start my thief year of Minnesota Vikings Draft Profiles, I’m looking at one of the most intriguing, and possibly underrated needs on this team. I am of course referring to the linebacker position. Way back in 2019, Vikings fans were split down the middle on whether they were excited or horrified that the team had chained itself to Anthony Barr with a 5-year $67.5 million deal.

The deal was struck at the eleventh hour, right before Barr left town to join the New York Jets. Since then, Barr has played in 16 of a possible 32 regular season games. He has also recorded 85 total tackles, 1.5 sacks, and defended just one pass. Not great for the fourth highest paid player on the team.

The Vikings face a tough decision on what to do with Barr. They could move on from him before the March deadline and save themselves about $7 million in cap space. That would leave the team with almost zero veteran presence at the linebacker position, assuming they can’t bring back either Todd Davis or Eric Wilson either.

If they can’t have the experience, maybe they can make up for some of that with explosiveness and athleticism from a shiny new rookie. Enter Notre Dame’s Jeremiah Owusu-Koramoah.

Owusu-Koramoah spent all four of his college football seasons with the Fighting Irish, but only recorded stats in his junior and senior seasons, despite playing two games in his sophomore campaign. In two years, he recorded 142 total tackles (96 solo, 46 Ast), 24.5 TFLs, 7.0 sacks, and 7 passes defended. He also was a unanimous All-American, won the Butkus award for the nation’s best linebacker, and led Notre Dame to the College Football Playoff, all in 2020.

When watching his film from this past season, the first thing that jumps out at you is Owusu-Koramoah’s explosiveness and ability to play in space, especially in the passing game. This makes sense as he is a converted safety, coming into college as the nation’s 28th best safety according to ESPN.com.

This would asswage Vikings fans biggest doubt about their current linebacking core, their ability to matchup with tight ends and running backs. Barr has pretty notoriously been toasted in several nationally televised games for scores by running backs. Owusu-Koramoah would instantly fit into that coverage linebacker role.

Mike Zimmer would surely love having a guy like Owusu-Koramoah as his Will linebacker next to Eric Kendricks. With his athleticism and coverage skills, Owusu-Koramoah could act as a sixth defensive back in nickel sets while still being able to attack the edge on runs.

He will have to attack from the ends because his size doesn’t afford him the ability to mix it up too well on the inside of formations. It isn’t for lack of effort as he’ll throw himself at the issue, but being only 6’1” and 215 lbs, he’s not going to be able to stack and shed many linemen in the NFL. Better to let him use his athleticism to attack tight ends or leading blockers.

Despite having 7.0 sacks in two seasons, I question his ability to consistently rush the quarterback. Again, he’s going to have a tough time muscling past any linemen in the NFL. However, he could get opportunities as a free rusher, and his speed would let him close quickly on passers.

If the Vikings want to lock up Owusu-Koramoah, they will have to spend their first round pick at 14, or maybe even move up to nab him. Barring some sort of freak injury of course, Owusu-Koramoah is a solid first rounder. Some mocks have him sliding to the back of the first round, but I doubt he drops below the 10-15 range, especially if he’s available when the Vikings pick.

I know it might sound crazy, but picking an athletic, rangy linebacker like Owusu-Koramoah actually helps both the Vikings linebackers and defensive backs, two positions that both need a lot more help in practice than on paper. In my mind, he’s essentially if you had Harrison Smith up in a linebacker spot every play.

Just think for a second if you have Harry up on one side of the line and a practically carbon copy of him on the other and you have no idea which one will blitz. Opposing quarterbacks would be ready to throw the ball away before the snap. I would say that I would worry about the Vikings run defense suffering, but we all saw just how bad they already were at stopping the run last season.