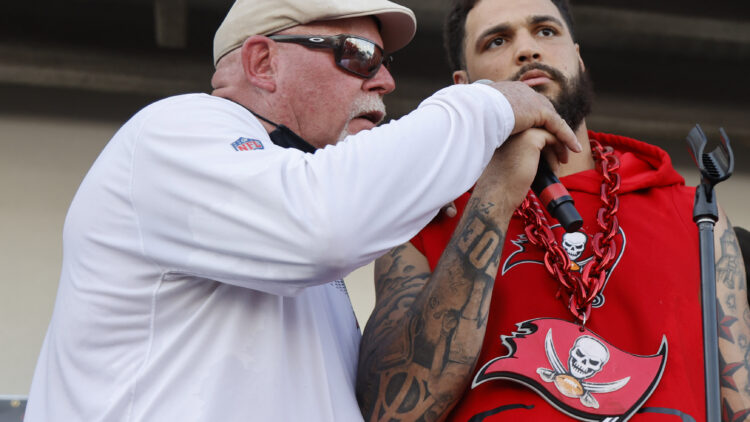 It’s easy to quickly land on Tampa Bay as the projected winner of this division based mostly on the memory of them winning the Super Bowl last season. Just because it’s easy doesn’t mean it’s wrong. The Bucs brought the band back together, and it’s a damn good band.

The New Orleans Saints will still be marching in, though, and they’ll have some things to say about how the division unfolds. As tempting as it is to write this squad off with the retirement of future Hall of Famer Drew Brees, you’d be disrespecting a winner of a head coach and a talented roster-building front office in so doing. The Saints seem settled on Jameis Winston as their new starter, and while they’ll be without star receiver Michael Thomas right out of the gates, they do still have plenty of playmakers on offense. Dual-threat Alvin Kamara leads the way, but the offensive line is stout and some young receivers, such as Marquez Calloway, are in a position to break out.

Additionally, let’s leave some room for an offensive boost at the hands of Sean Payton, who surely has some interesting twists in store as it relates to the inclusion of Taysom Hill. And finally, this Saints defense is nothing to spit at. They had the fourth most takeaways last season and they also ranked fourth in total defense and fifth in scoring defense. So, actually, they’re more than just not something to spit at. They’re damn good.

Did I just talk myself into picking the Saints over the Bucs in the South this year? No. It’s still Tampa’s division.

The Bucs roster from last season is back, with some minor tweaks such as the addition of Giovanni Bernard as a change of pace / pass-catching option. Whenever a team brings the same roster back from the previous season, the question becomes: Does the maturation and addition of young talent outweigh any decline in ability from veteran producers? From this standpoint, the discussion centers on QB Tom Brady, WR Antonio Brown, TE Rob Gronkowski, DE Jason Pierre-Paul, and DT Ndamukong Suh. What is the level of decline based on age? Then take a peek at guys like CBs Sean Murphy-Bunting and Antoine Winfield, Jr., LB Devin White, and RT Tristen Wirfs, among others. What is the level of ascension/maturation for them? To me, the ascension of young talent outweighs any decline we may see from the veterans.

In addition to all of that, let’s leave room for some improvement by Tampa Bay’s offense based on synergy. Last season was the first for this current group, particularly as it relates to the addition of Brady. They prepared for the season with no offseason program due to Covid and had to learn on the fly. In the first 12 weeks, the Bucs were 7-5 and averaged 28.6 points per game. At that point, we did not look at them the way we look at them now. After their bye, they came out an improved bunch who were on a mission. They won eight straight games, culminating in a Super Bowl victory, and averaged 33.9 points per contest – more than 5.0 points per game better than the first 12 weeks.

Atlanta and Carolina will be hard-pressed to keep pace with Tampa Bay and New Orleans in 2021. There’s a lot to like about what Matt Rhule is doing early in his tenure with the Panthers, but the jury is definitely still out on Sam Darnold, whom they just acquired this offseason. Atlanta has a new head coach – Arthur Smith – and front office and there’s a reason for optimism there, but they are a year away from being a significant factor when compared to rivals New Orleans and Tampa Bay.