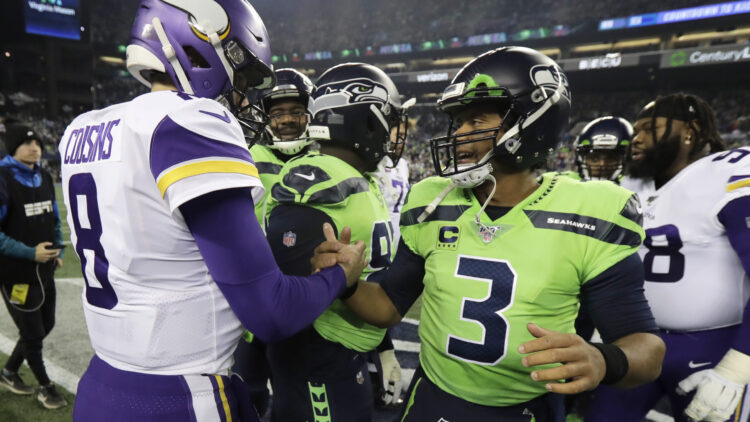 Sunday will be the eighth time a football game will be played featuring that starting QB matchup — and the ninth time they will see game time versus each other. Cousins and Wilson have played in a few big games against each other over the years, usually somewhat drama-filled and more often than not being decided by big plays either by one of them or the opposing defense.

Heading into Sunday’s Vikings-Seahawks game, I wanted to take a look at how those past matchups went as well as some of the overall trends we’ve seen in this matchup across the years. Since splitting the two matchups they had in college, Cousins has gone 1-4 against Wilson as a starter in the NFL, losing all three of his matchups since joining the Minnesota Vikings in 2018.

Kirk Cousins attended Michigan State University from 2008-2011, starting five games as a freshman before setting nearly every Michigan State passing record before graduating. Russell Wilson originally attended North Carolina State University from 2007-2010 before transferring to Wisconsin for his last year of football eligibility. Wilson set the Big-10 on fire in his first year with the Badgers and got off to a 6-0 record while routinely blowing out their opponents.

However, in a Week 7 matchup with Michigan State, Kirk Cousins threw a 44-yard touchdown pass to Keith Nichol, putting the Michigan State Spartans up 37-31 as time expired. Wisconsin lost a close game the following week at Ohio State, whom Michigan State had already beaten, before cruising through the rest of their schedule to bring them to a 10-2 record going into the inaugural Big-10 Championship Game. In this game, they would once again face Kirk Cousins’ Spartans, who also came into the matchup with a 10-2 record. Furthermore, the game was just as high-scoring and exciting as the first, but this time it would be a big 4th-Quarter throw from Russell Wilson, giving the Badgers the 42-39 win over Cousins’ Spartans in the first-ever Big-10 Championship Game. 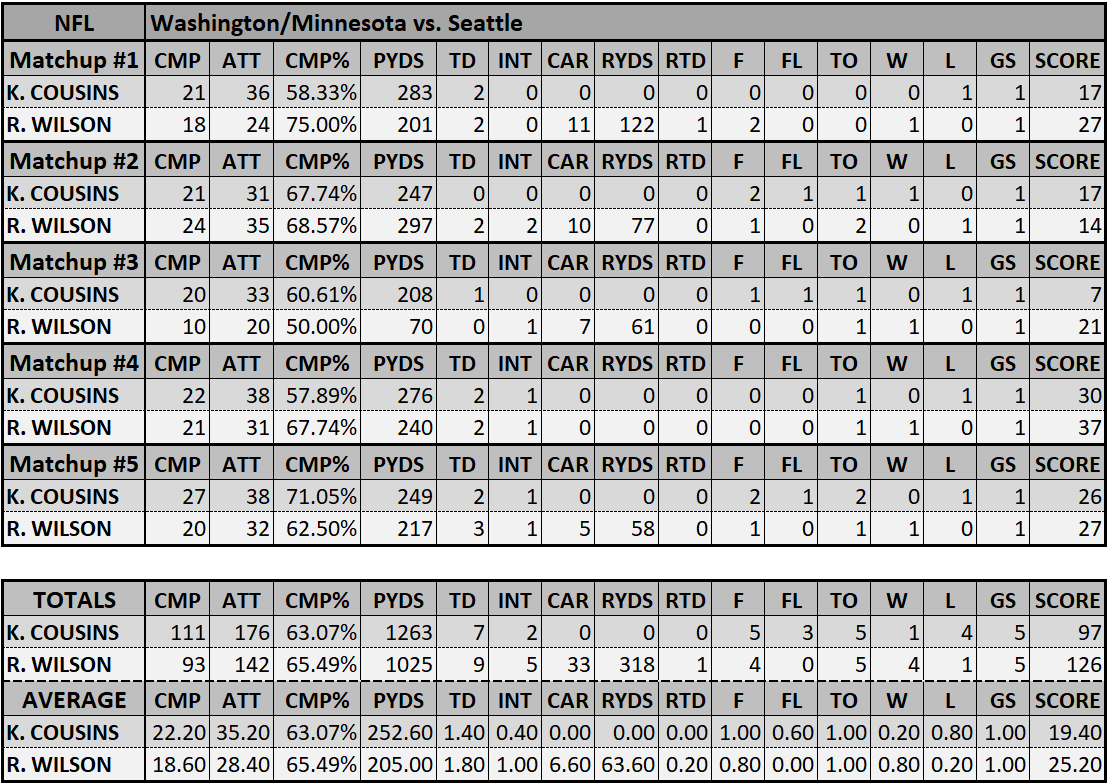 The Seattle Seahawks drafted Russell Wilson in the 2012 NFL draft with the 12th pick of the 3rd round, pick number 75 overall. Shortly later, in the 4th round, Kirk Cousins was selected by Washington with the 102nd overall pick. Both quarterbacks had been drafted with the intention that they would be backup/project quarterbacks. Russell Wilson was drafted by a team that had just signed Matt Flynn coming off of a career performance (one-game) to a 3-year/$26 million contract to be their starting quarterback.

While Washington had selected Robert Griffin III 2nd overall, Cousins was drafted to be the primary backup to the future franchise quarterback. Russell Wilson would win the starting job in training camp while Cousins had to wait his turn. In their rookie seasons, their teams would meet in the NFC Wild Card Round, with the Seahawks winning 24-14. With about 6:30 left in the game, RG3 lunged for an errant snap and went down with a non-contact knee injury. Cousins would enter the contest and complete 3 of 10 of his pass attempts for 31 yards in relief.

Cousins played against Wilson’s Seahawks twice as Washington’s starting quarterback. The first matchup came in Week 5 of 2014. In this game, the Seahawks defense was really rolling. The score could have been much more lopsided than the 27-17 final score indicated, seeing as former Viking Percy Harvin had an amazing three touchdowns called back for offensive penalties.

In the last matchup Cousins had against Wilson as Washington’s starting quarterback in 2017, the two signal-callers traded late-game heroics in a thrilling finish. Although Washington was leading the game 10-8 late in the 4th quarter, Wilson would find Doug Baldwin on a 30-yard touchdown pass with just over a minute and a half remaining. Cousins responded with a 4-play, 70-yard drive that ended with a 1-yard Rob Kelly touchdown run to win the game.

Cousins signed with the Minnesota Vikings as an unrestricted free agent leading into the 2018 season and amazingly has faced the Seattle Seahawks each of his first three years as a Viking, with this Sunday being the fourth. This will also be the fifth straight season that Cousins has faced Wilson going back to Washington. However, this will be the first of those five matchups he will enter as the home quarterback. 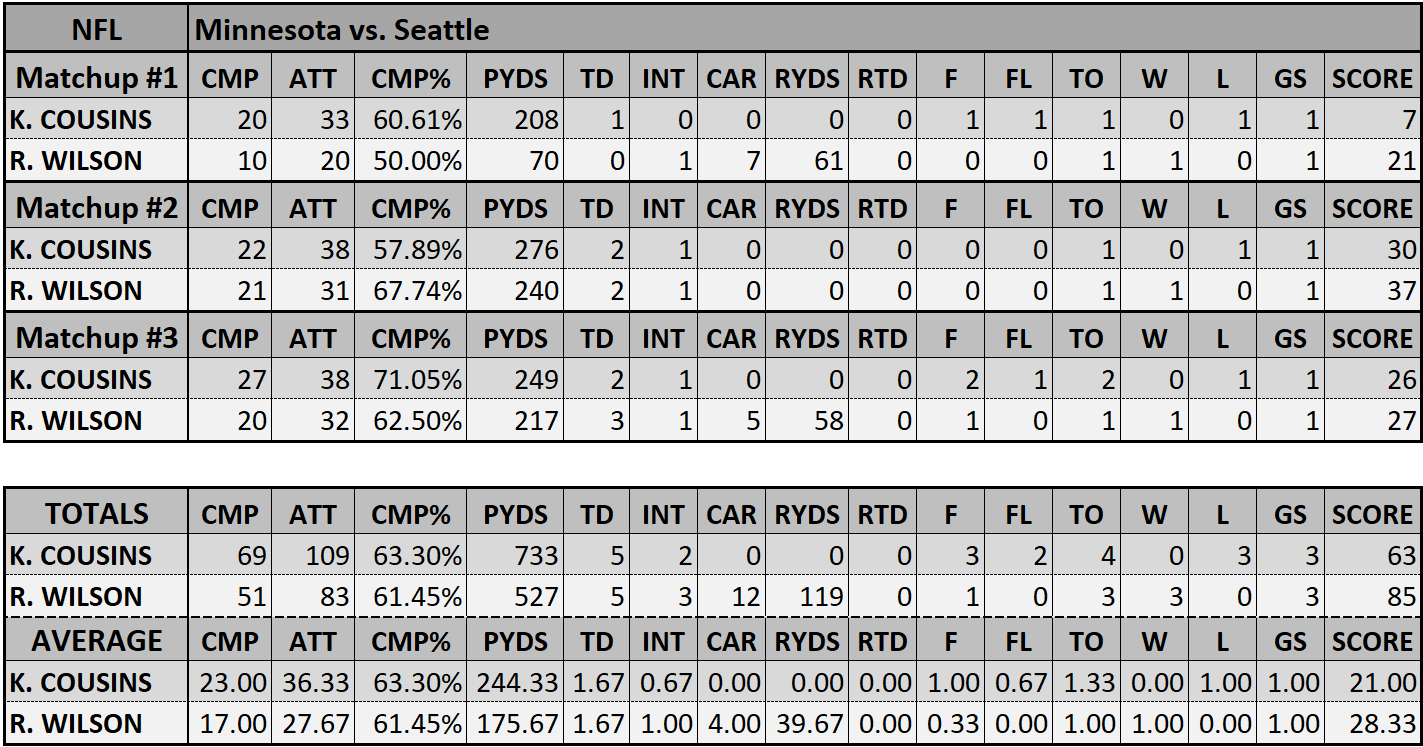 In the first matchup Cousins had with Seattle in Minnesota, the game was extremely close in the fourth quarter. On a Vikings field goal attempt, Bobby Wagner controversially utilized one of his own linemen to leap over the Minnesota Offensive Line and block the kick. It was a massive momentum shift in the game, and the Seahawks ended up scoring two late touchdowns to bring the final score to a deceivingly lopsided 21-7.

In 2019, the Vikings led the Seahawks 17-10 at halftime before giving up 17 unanswered points in the 3rd quarter. Kirk Cousins drove for two passing touchdowns in the 4th quarter but ultimately fell 37-30. Kirk and Russell had remarkably similar games in this matchup, both accounting for two touchdowns late in the game, trying to win it for their team.

Last season’s matchup was similar to 2019, with the Vikings having a two-score lead at halftime before giving up 21 points in the 3rd quarter. Both quarterbacks traded touchdown drives in the 4th quarter, with Wilson driving 94 yards in 13 plays and hitting DK Metcalf from 6 yards with only fifteen seconds left on the clock for the game-winning score. 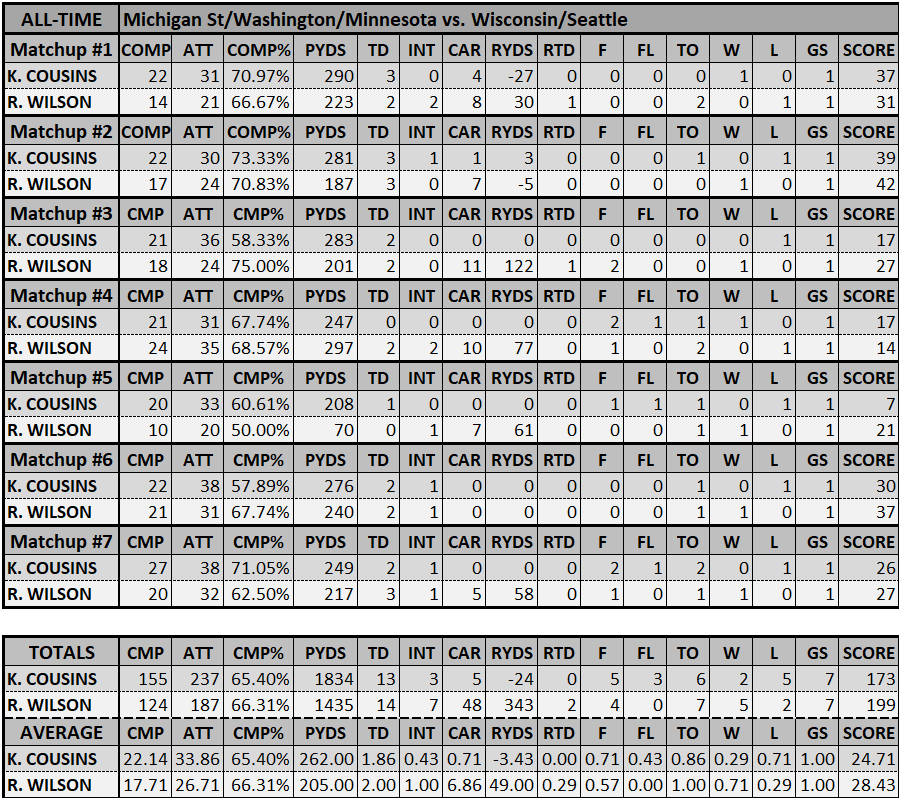 Looking back at Kirk vs. Russ across the years, there are a couple of trends that we can see start to emerge. First off, both players have firmly entrenched themselves into the category of “Clutch Performers,” and it’s never on show more than when they play each other. Almost every matchup has featured at least one, but usually, both of them putting together fantastic end-of-half or late-game drives. Turnovers have also played a big part in these matchups. Although Russell Wilson has thrown over twice as many interceptions in their NFL matchups, exactly one interception per start in these games, Kirk has lost three of his five fumbles compared to Wilson retaining possession on all three of his fumbles.

With Dalvin Cook questionable to play on Sunday, there is a chance that we will see the Vikings offense be much more aggressive in the passing game, and protection will be critical. If the offensive line can have a strong performance and the offense as a whole can play a relatively penalty-free game again like last week, Kirk could be in for a big day against the Seahawks. Jamal Adams is the definition of a hybrid/box safety that struggles in coverage historically, and he is currently the higher graded of the Seahawks’ safety duo in coverage, according to PFF. Hopefully, we see Kirk continue to play like he did last week, and we can hold off what I’m sure will be another fantastic performance from Russell Wilson, who has repeatedly ripped out the heart of Minnesota fans. From his first start in Minnesota as a member of the Wisconsin Badgers when he completed 16 of his 17 attempts for 178 Passing Yards & 4 TDs, to leading the Seahawks against the Vikings in the heartbreaking 2015 NFC Wild Card round of the playoffs, Wilson has been an absolute menace to Minnesota football fans. Hopefully, Kirk Cousins can bring his record against Russell Wilson to 3-5, and we can celebrate a much-needed Vikings win in Sunday’s home opening game.