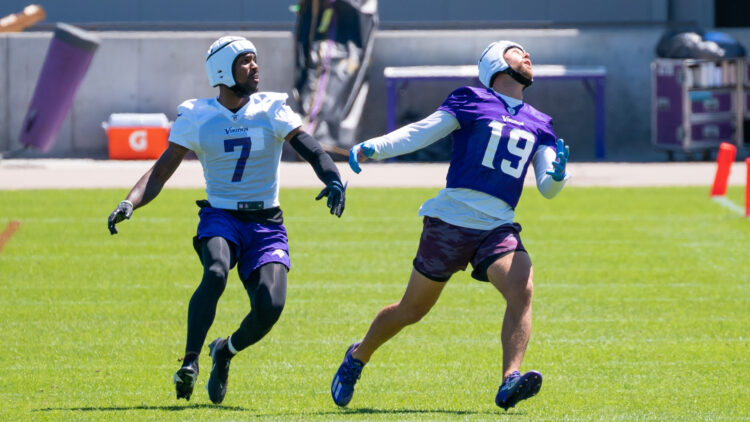 After a lackluster 2020, the Vikings went all-in with a couple of significant additions, specifically to the defensive side of the ball. The offseason was highlighted with the out-of-the-blue signing of Patrick Peterson, the soon-to-be 31-year-old and ten-year veteran of the Arizona Cardinals.

Whether he has enough left in the tank remains the biggest question mark; however, Mike Zimmer and Co may be precisely what the three-time All-Pro needs to rejuvenate his career.

Patrick Peterson recently went on air and stared on Bryant McFadden’s podcast All Things Covered and already expressed signs of the rejuvenation process.

While on air Peterson made a couple of notable statements:

I feel great man, I feel like I’m finally able to do what I do. I believe this coaching staff is allowing me to be Pat P. Allowing me to—let me do what got me to the All-Decade team, to eight straight Pro Bowls, top-five draft pick—all of that. Them just allowing me to do what I do is just a blessing because that’s when I’m most comfortable in my game when you allow me just to be me. I understand coaches are allowed to coach, but at a certain point you gotta let your players be players at the same time. You can’t overcoach a player.

More interestingly, Peterson even called out his former employer, not mincing words either:

Finally, Peterson concluded by stating he is motivated and truly believes he can be the missing piece. Specifically opposite of Cam Dantzler.

In case you were unaware, the week two matchup just so happens to be the showdown between the Vikings and the Cardinals, aka the revenge game. Safe to say, Peterson will undoubtedly be juiced heading into that week. More importantly, he can’t wait to show up an do what I do in they face.

Regardless, the Vikings will truly appreciate Peterson’s services after finishing 29th and 27th in points allowed and yards allowed, respectively.

For those that wonder if father-time has remained undefeated and Peterson truly is on the decline, perhaps this might clear it up. Since 2019, Peterson has recorded an atrocious PFF grade of 45.8 when in man-coverage. Within that grade, Peterson has surrendered five touchdowns on top of a passer rating of 114.1.

On the flip side, that same PFF grade increases dramatically to 72.7 when in zone coverages. Furthermore, Peterson registered a passer rating of 68.5 when targeted while also notching four interceptions and allowing zero touchdowns.

Keep in mind; the Vikings deploy man-to-man coverage only about a third of the time. The remainder is spent in either zone or a hybrid between the two—which certainly bodes well for P2.

One doesn’t have to be a football genius to see the significant difference in Peterson’s game in the two coverages. Perhaps this is what P2 meant when he said this coaching staff (Zimmer and Co) allows me to be Pat P and do what I do.

Simply put, the 31-year-old veteran no longer has the wheels to line up and follow the opposing team WR1’s. Which is precisely what the Cardinals did: having Patrick Peterson shadow the DK Metcalf’s and Stefon Diggs’ of the game. If Zimmer opts for this route, his 55.2 PFF grade from 2020 may be hit again. One that may be tolerable if that’s the case.

However, if Zimmer allows P2 to use his savviness and zone skills, Peterson might be in line for a fantabulous bounce-back season. A season that Zimmer, and fans, of course, would be more than appreciative of.