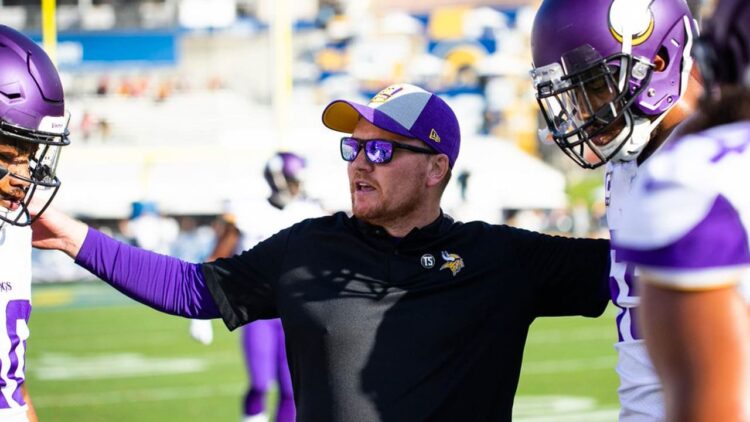 There’s been quite a few changes on the coaching staff since the Vikings’ season ended on Saturday. Kevin Stefanski is now the head coach of the Browns, George Edwards did not have his contract renewed and Jerry Gray has parted ways with the team. All three of them could reportedly join Stefanski in Cleveland along with receivers coach Drew Petzing.

Well, one person has emerged as a possible option to help run the defense.

According to Alex Marvez of SiriusXM NFL radio, Adam Zimmer is a candidate to become the next defensive coordinator of the Vikings. Zimmer, 36, is the son of head coach Mike Zimmer. Adam has been the team’s linebackers coach for the past six seasons.

Multiple sources tell @SiriusXMNFL that Adam Zimmer is a candidate to become next @Vikings defensive coordinator working under his dad Mike. Adam has served as MIN LBs coach the past 6 seasons & helped develop two good ones in Eric Kendricks & Anthony Barr

Before coming to Minnesota to work under his father, Adam spent the 2013 season with the Bengals as an assistant defensive backs coach. He worked with the Chiefs from 2010-2012 and the Saints from 2006-2009 as an assistant linebackers coach.

Linebackers Eric Kendricks and Anthony Barr have both been standouts under Zimmer. Barr is a four-time Pro Bowler and Kendricks was named a First-Team All-Pro for the first time this season. Last year, Zimmer was given the opportunity to be head coach of the West team for the 2019 East-West Shrine Game where he coached and scouted future Vikings’ draft pick DT Armon Watts.

Another in-house candidate that will likely be considered for the job is defensive line coach Andre Patterson.