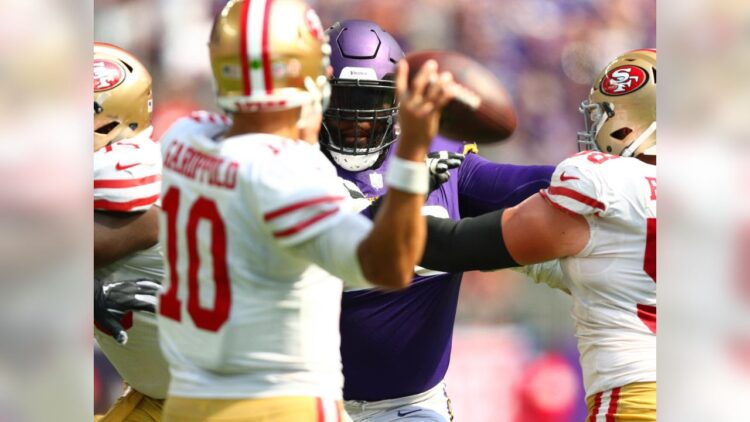 Typically, Tuesdays are off-days in the NFL. But with the Vikings and 49ers playing on Saturday in a divisional playoff game, practices have been moved up a day. Here’s a look at each team’s injury reports following the first session of the week.

The Vikings had a light practice on Tuesday. Here’s an estimation of the injury report following the team’s walk-thru.

*The Vikings had a walk-thru practice on Tuesday (1/7) and the practice report is an estimation. pic.twitter.com/nLleDeervF

Stefon Diggs was a non-participant in Tuesday’s walk-thru due to an illness. Last week a couple of players missed practice due to the flu. We’ll see if Diggs is able to return to the field on Wednesday, when practice will increase in intensity.

Also listed as non-participants were defensive tackle Linval Joseph (knee) and defensive back Jayron Kearse (toe/knee). Both players were active on Sunday against the Saints.

Earlier today it was reported that cornerback Mackensie Alexander will miss the game on Saturday after electing to undergo an operation on his knee. He was listed on the injury report as a non-participant.

Tight end Tyler Conklin suffered a knee injury in the second quarter of Sunday’s game against the Saints and did not return. Defensive tackle Shamar Stephen also left the game with an injury. Both players participated fully in practice on Tuesday.

San Francisco is coming off a bye week since earning the first seed in the NFC. The bye week proved to be beneficial to the 49ers on the injury front.

Jaquiski Tartt is a full go ahead of matchup vs. Vikings.

A couple of the more notable free agent signings of the offseason, linebacker Kwon Alexander and pass rusher Dee Ford, could both return this week along with 3rd-year safety Jaquiski Tartt. All three players are starters on San Francisco’s defense.

The trio was all in action at practice on Tuesday. Alexander (pectoral) has a “good chance” of being activated off injured reserve and playing this week according to head coach Kyle Shanahan. Tartt (arm) was a full participant in practice and is expected to play on Saturday. Ford (hamstring) was limited.