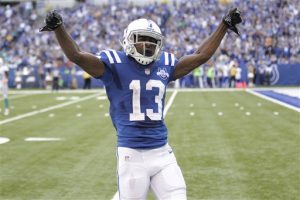 You know what’s worse than starting 0-1? Starting 0-2. And that’s exactly what will happen to either the Vikings or Colts on Sunday, as these two teams prepare for one another this week after losing season openers last week.

The Colts are an unfamiliar opponent for the Vikings, appearing on the regular season schedule once every four years. So let’s familiarize ourselves with the Vikings Week 2 opponent.

Coordinator Matt Eberflus employs a base 4-3 front and the entire group is anchored by one of the NFL’s top linebackers – Darius Leonard. A 2018 draft pick, Leonard is already a two-time All Pro. He’s a three-down player with few weaknesses and is certainly a player around whom offenses must game plan. Another noteworthy name in the front seven is DT DeForest Buckner, a blue-chip free agent signing this past offseason.

Buckner commands double teams frequently, particularly on passing downs. In fact, Jacksonville doubled Buckner on 60.8% of his snaps as a pass rusher last week. Justin Houston is another member of the front seven who can cause problems. He had 11.0 sacks a season ago, becoming the first Colts defender to reach that total since 2016.

In the secondary, it’s a familiar face who is the most noteworthy. Former Vikings CB Xavier Rhodes is now in Indianapolis, starting on the outside. He made two costly mistakes last week in Jacksonville, getting flagged for one defensive pass interference and then a little later in the game surrendering a 22-yard touchdown catch to Keelan Cole. Kenny Moore is the team’s nickel cornerback and he’s actually one of the better ones in the League.

It will be interesting to see how Indianapolis approaches Dalvin Cook and the Vikings running game this week. The Colts were leaky in the first half against Jacksonville, allowing James Robinson to rush for 61 yards on 10 carries. But in the second half, the Colts responded. And they did so in numbers and force.

Eberflus crowded the box with seven and eight defenders consistently, and on running downs he frequently utilized run blitzes. The strategies worked because Robinson had one rushing yard on six carries in the second half.

Without question, the strength of the Colts offense is its offensive line. They boast one of the NFL’s best left guards in Quenton Nelson and they’re also strong at left tackle with Anthony Castonzo, center with Ryan Kelly and right tackle with Braden Smith. This outfit is one of the most complete in the NFL and poses a great challenge for a Vikings defense line that was outplayed last week and is missing its best player – Danielle Hunter.

If the Colts offensive line controls the point of attack, the Vikings are in for a long afternoon because there is a fast group of receivers, a versatile group of tight ends and a talented group of running backs licking their chops. One of the group’s best players – RB Marlon Mack – was lost for the season a week ago after injuring his Achilles. That only leaves the door open, though, for rookie RB Jonathan Taylor as well as dual-threat back Nyheim Hines. Together, these two backs combined for 30 touches and two touchdowns.

The triggerman behind all of this is veteran QB Philip Rivers, whose time with the Los Angeles Chargers had come to an end. It’s a new beginning for Rivers in Indianapolis, but not much has changed in terms of how the gunslinger operates. He still loves to be in the gun and he’s not afraid to sling the ball around the field.

Indianapolis went with a rookie at kicker, with former Georgia Bulldog Rodrigo Blankenship coming out of camp victorious in the competition. Rigoberto Sanchez is the punter and holder while Nyheim Hines is still listed as the top kickoff and punt returner, though that could change with Hines in line to see more snaps on offense with Mack being lost for the season.

When Minnesota has the ball

Last week’s game got away from the Vikings offense. After their impressive opening drive, the Vikings offense found itself on the sidelines for most of the rest of the first half. A safety, three-and-out and interception limited the number of plays the Vikings were able to run, which reduced Cook’s touches, which helped Green Bay increase its lead, which only reduced the running game’s validity.

Expect the Vikings to move mountains in order to avoid this fate on Sunday in Indianapolis. Cook will likely see plenty of touches as a runner and receiver early in this game. The Vikings cut the Packers a break by not forcing them to tackle Cook very often. They won’t make that same mistake against the Colts, especially early in the game.

After the early stages of the game, expect the Vikings to work Kyle Rudolph and Adam Thielen into the mix. The Colts played a bunch of zone coverage in Jacksonville, so that’s where Rudolph would come in.

Thielen is obviously the team’s best receiver and warrants inclusion in the game plan regardless of who the opponent is, but you can’t help but wonder if the Vikings staff is quite eager to get Thielen matched up with Rhodes during the game. Thielen is such a fine technician and route runner that it wouldn’t surprise at all to see him A) beat Rhodes multiple times and B) draw multiple holding/defensive pass interference penalties.

When Indianapolis has the ball

To be clear, though, the Colts also can and will get big and nasty. They used two-plus TE looks 10 times on Sunday, including four snaps of 13 personnel. Head coach Frank Reich also mixed in four snaps of 21 personnel, showing he’s not opposed to using both Hines and Taylor simultaneously.

TY Hilton is Rivers’ top target in the passing game and the Colts love to target him when using play action and also on out-breaking and comeback routes in addition to vertical routes.

Expect the Colts to use Rivers in the gun, 11 personnel and plenty of play action to attack the Vikings early. Reich will mix in some runs with Taylor and maybe even Hines to challenge this Vikings defensive front, but Indianapolis’ bread and butter is using its speed to challenge man coverage and flood concepts to challenge zone coverage.

Discounting the QBs, the players each team will have to focus on the most are Thielen and Hines.

The Colts may not have an answer for Thielen. Their best CB is Moore, the nickel CB, so the Vikings can easily avoid that matchup by not putting Thielen in the slot. Sure, Thielen’s old practice nemesis and teammate Rhodes could try to check him, but your money should be on #19 in that scenario over the course of the game. If the Vikings can protect Cousins, then Thielen is going to be a problem for this defense.

Hines is a true dual-threat back. He led the team in rushing yards and receptions – aside from having two touchdowns – last week in Jacksonville and his role should only increase now that Mack is sidelined for the season.

Watching Rivers presnap is like watching a symphony conductor in a mosquito-infested jungle. Arms flailing, hands moving, lots of yelling. Rivers loves to audible, check out then check back in to plays, fake audible, etc. This can make it harder on a defense to disguise its intentions.

If Rivers truly is checking into different plays so much, the defense sometimes must also adjust with that same frequency and therefore they’re spending those precious presnap seconds communicating and shifting as opposed to disguising their intentions.

There is one component to all of this, though, that favors the Vikings. And that is the lack of crowd noise in the building with no fans in attendance. This is going to allow defenders to hear what Rivers is saying and, more importantly, to hear every word of the cadence. Hearing the cadence so clearly all game will help the defense time its get-off and help the defense effectively disguise intentions.