After a week of new COVID-19 cases surpassing 50,000 nationally three for consecutive days, and the rate of positive tests quadrupling the World Health Organization’s rate of 5% (the rate it’s said is needed to reopen economies) the United States, along with its even reddest of states now rolling out cautionary limitations (again) for the public (and in the case of Florida’s biggest county of Miami-Dade, reinstituing curfews and closing beaches for the beachiest of beach holidays that is the 4th of July), it’s starting to feel like the NFL won’t end up having a 2020 season after all.

That is, unless they end up doing something drastic that could end up bolstering their indesicive plans of expanding globally and playing the season in Europe.

Hear me out.   It’s been rumored that Europe may institute a travel ban of people from the United States. Most countries there (and really everywhere) have succeeded in flattening their curves and hitting the goals that the aforemetioned WHO has said should be hit before re-opening. Simply look at the difference in these European countries’ new COVID-19 cases: 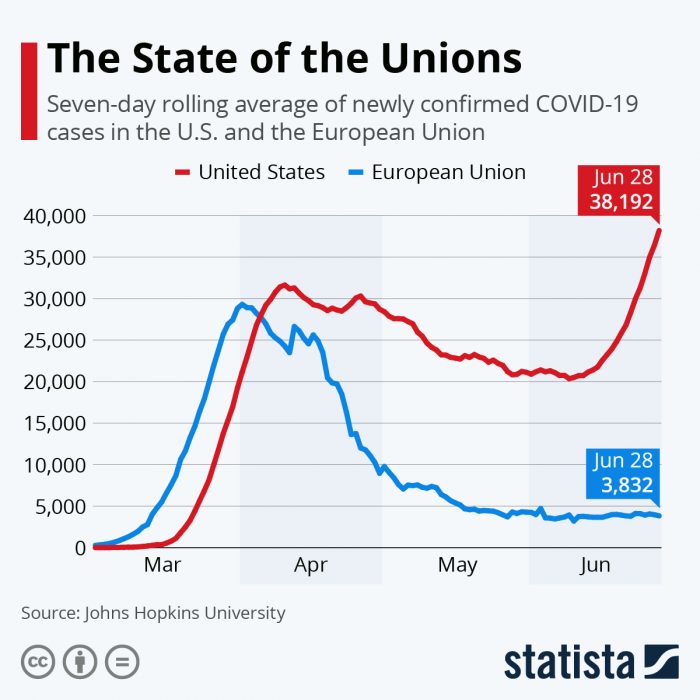 Due to this being an election year and because everything is politicized these days, the issue of wearing masks or re-opening economies in the United States has become a political issue, and one that really defines, in my opinion- the stark difference between the left and the right.

One side is looking at common sense suggestions that the rest of the world has followed successfully as just that, while the other is pushing conspiracy theories with no basis in reality or science, suggesting things like the idea that masks are the cause of the pandemic- or that this somehow is government overreach and control or some sort of issue of liberty.

While President Trump isn’t the cause of the above, he is a very large symptom of it. He’s peddled in pseudo-science and finds value in reinforcing things he doesn’t believe himself because it resonates with his base and that’s really all he cares about these days.

If he cared about COVID or human lives he would’ve done a million things differently since he was briefed on the potential fallout from COVID last year. People online always ask “LIKE WHAT?!?” to which the simple reply is to do what Europe has done.

It’s clear that things are going to continue to get worse before they get better. The pain that the US economy suffered from the temporary (and too short) closure was all for nothing, as we’re actually worse off in terms of COVID now than we were before the closures. These are all things that people like Dr. Fauci said would happen, but instead of listening to him, a man who has dedicated his entire life to trying to stop something like this from happening, he’s been mocked and threatened to the point that he has had to get personal security.

I can’t think of anything more American than that.

I was watching the amazing HBO mini-series ‘Band of Brothers’ last night and in the beginning of the first episode they interview real veterans of World War II. One of the men discussed four men from his small down that were deemed 4F in terms of their health (with 1A being the healthiest someone can be) and thus were deemed too unhealthy to be able to fight in the war.

Those four men committed suicide because of the shame they felt in not being able to risk their lives for the country they loved. “It was a different time” the man said, a different time indeed.   Now people can’t even be bothered to wear a mask inside of a store to save their country and countrymen from unnecessary pain both physical and economic/financial.

Because of that, again, Europe may take the unprecedented step of banning travel from the United States, which has been essentially hailed as the end of “American Exceptionalism”.   Before that happens, though, the NFL should put together a plan to play it’s 2020 season in Europe as there is simply no way that as things are that COVID won’t ravage the league and it’s players.

How can you expect 32 teams with rosters of 55 players each, and countless coaches and support staff, who all travel, practice and play in the closest quarters and distances imaginable not to spread the disease like high school wrestlers spread herpes simplex-2? The featured image for this article is of a Chicago Bears helmet that has been sent around social media as the “new 2020 NFL helmet”. It’s fake, per Snopes, but the fact that people think that it IS real should really be the only argument needed as to why the NFL needs to play its season in Europe.

The NFL. Arguably the new American past-time. Played in Europe. If that isn’t an indictment of how things have been handled (or haven’t been) by this administration…

Look at the Dallas Cowboys (“America’s Team”) and Houston Texans who have already dealt with outbreaks on their teams during an off-season in which players aren’t meeting for any official capacity?

Instead, the team could essentially go to Europe and play in the stadiums that NFL Europe played in. Those different countries could then “adopt” NFL teams for the season and the players would then not have to play in front of empty stadiums and completely lose one of the main advantages of playing at home.

This would check many boxes for the NFL in terms of fulfilling it’s TV contracts (although the time difference would have to be accounted for in some way), keeping its players and staff safe(r), and also helping increase it’s global brand and planned (?) expansion into Europe (something that we’ve all seen with the games that are played each year in the UK).

If not for that, my fear is that the NFL won’t have a season this year which while I do cover the league for a living wouldn’t be as bad as the league losing a player or coach to the virus. Despite the $10 billion a year in revenue the league does create, there is no dollar sign that is bigger than a human life and I strongly believe that if the league did end up playing in Europe it wouldn’t have to make the decision between money and human life.

Then again… I read somewhere that COVID was actually created by football helmets. So. Grain of salt.

Joe Johnson started purplePTSD.com back in 2015 & purpleTERRITORYradio.com in 2019, and purchased VikingsTerritory.com before the 2017-18 season , used to write for VikingsJournal.com and is the host of the ’Morning Joes’ & ‘About the Labor’ Podcasts, as well. Follow on Twitter: @vtPTSD

Sansevere: What Superhero would be the best fit for the Vikings?

Tom Brady one win away from 10th Super Bowl Appearance